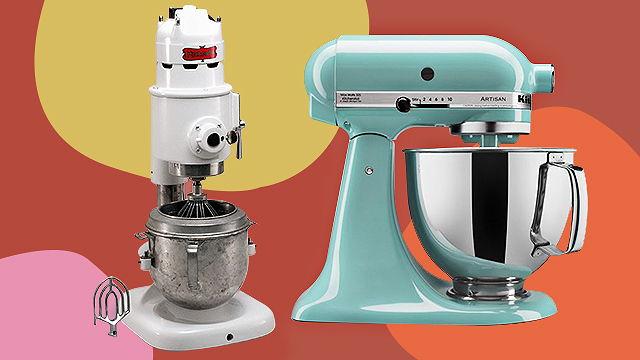 The History of the KitchenAid Stand Mixer, the Appliance With Its Own Dedicated Fan Base

It's been around for over a hundred years.

(SPOT.ph) The name KitchenAid—that of an American appliance manufacturer owned by Whirlpool Corporation—has become synonymous with the stand mixers it is best known for. To put it simply, the stand mixer is the brand’s most famous product, but to get to the heart of the matter, KitchenAid is its stand mixer. Many refer to the appliance—though available in several sizes and variants—as simply "the KitchenAid." Think of the way Colgate or Pampers—both brand names—are often thought of as common nouns for the products they sell; toothpaste for the former, diapers for the latter. That’s how well-known the KitchenAid, as we’ll be calling the device, is.

Known for its durability, versatility, and signature mid-century design, the KitchenAid is something of an aspirational symbol—maybe even a rite of passage. The mixer, after all, does not come cheap. Buying one seems to hold the same weight as purchasing your first car or paying your first month’s rent, which is to say, the people who do sure seem like they have their sh*t together. And as a CNBC video released in January put it, "yes, it is more expensive, but it is the last mixer you will ever buy." But how on earth did a mixer of all things—an item used to whip up pastries—become so beloved and renowned? When did it turn into the stuff of suburban home-living, kitchen island-having, Pinterest-board dreams?

The History of the KitchenAid Stand Mixer

Before KitchenAid, there was the Hobart Manufacturing Company, which was founded at the tail-end of the 19th century in Troy, Ohio. They later changed their name to KitchenAid after the wife of a company executive called their stand mixers "the best kitchen aid." In 1914, the company released their first stand mixer, which was designed for commercial use. Dubbed the Hobart Model-H, the mixer was itself a ground-breaking invention as the concept of the machine hadn’t even existed before then. The idea of a stand mixer was created by engineer Herbert Johnston, who worked at Hobart at the time and is credited with having invented the device. It wasn’t until 1919, however, that the company introduced their first stand mixer made for at-home use. The Model H-5, as it was known, looked a lot different from the brand’s mixers today, but many of the foundational elements were already there: the standalone design that could sit on a kitchen countertop and the ability to connect various attachments meant for slicing, straining, whisking, and more.

The KitchenAid Stand Mixer—as we know it today—was truly born in 1937 with what is known as the Model K, crafted by industrial designer Egmont Arens. Functionally, it was not unlike the original H-5, but looks wise, Arens gave it its signature look. According to the KitchenAid website, the appliance was "the first of its kind to use a bowl that secured to the base with an interlocking motion.” And in the over 40 or so years since its first release, it hasn’t changed much—aside from some internal motor improvements, of course.

It wasn’t until 1955 that the KitchenAid—originally sporting a sleek white shade—was first released in an array of colors, namely Sunny Yellow, Antique Copper, White, Petal Pink, Island Green, and Satin Chrome. At the time, it featured a slightly different silhouette, but still had all the same key functions. Many of those '50s-era colors—or at least updates variations of them—are still available on the market today, though the brand has only continued to expand their shade range.

In 1969, KitchenAid introduced the Model K-45 to celebrate their 50th anniversary. Fun fact: KitchenAid mixer attachments from the late '60s can still fit onto the KitchenAids constructed today, according to CNBC. In the decades that followed, the brand added more appliances to their lineup, slowly but surely growing into the household name in the U.S. that they are today.

1949—a few years after the release of the Model K—saw the company introduce their first dishwasher. In 1986—also the year they were purchased by the Whirlpool Corporation—their first refrigerator hit the market with blenders, food processors, and even hand mixers following in 1993 and then induction cooktops in 2008. By 2019, KitchenAid celebrated 100 years in the industry and even now, they continue to innovate the kitchen-appliance game; you may remember they created a lot of buzz in 2020 when they unveiled their line of cordless blenders and hand mixers. Today, KitchenAid remains an undisputed favorite among home cooks and professional bakers alike. It’s well-documented that the appliance has been used by food-industry behemoths like Duff Goldman, Martha Stewart, and even Julia Child.

So what’s so special about the KitchenAid Stand Mixer anyway?

Aside from its durable and instantly recognizable build, the KitchenAid gets its reputation from more than just hype and aesthetics. What sets the stand mixer apart from others that share its function and price range is its unique planetary motion. Under the hood, its beater and its accompanying attachments work by spinning in opposite directions, much like the way the earth rotates on its own axis while simultaneously spinning around the sun. The simultaneous but reversed spinning motions allow the device to not only stir your batter, icing, or what have you in circles—the way you could do with your hands—but lets it fold and aerate the mixture as it goes. The result is a faster, more efficient, and more effective mixing motion.

According to CNBC, "your KitchenAid [mixer] can outlive you," noting the device has an average age of about six to years, which is a lifetime in modern technology. When well taken care of, the appliance can even be passed down from generation to generation. Some folks even get their mixers personalized with custom designs. For some, they are a household must-have that serves a wide variety of purposes—with the right attachments, the KitchenAid can be used not just as a mixer, but also as a pasta maker, grinder, food processor, spiralizer, ice cream maker, and sausage stuffer, just to name a few—and for others, they are a source of income, a career essential, or a passion-fueling tool. Either way, KitchenAids have well-earned their place in history and on the countertop.

Where can you buy the KitchenAid Stand Mixer in the Philippines?

In the Philippines, you can get the famous KitchenAid Tilt-Head Artisan Series stand mixers in three sizes, depending on how big or small you may need it: 4.5 quarts, 5 quarts, and 6 quarts. Prices vary depending where you get it, but they generally range from P24,635 to P40,660.