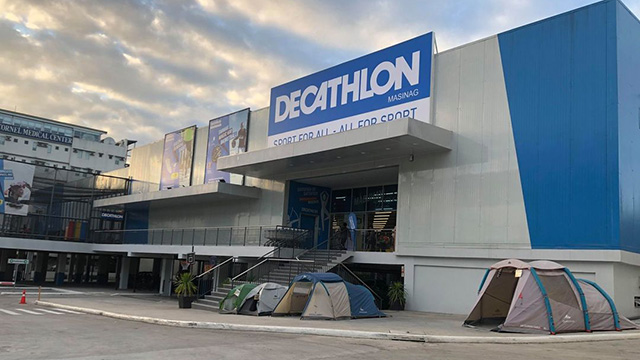 (SPOT.ph) In late August, sporting-goods store Decathlon announced that they'd be opening two new branches in Metro Manila—one at SM North EDSA in Quezon City and another at SM Mall of Asia in Pasay City. Though no opening date has been announced for their upcoming Pasay outpost, we do have some good news for the north folks out there: Decathlon's SM North EDSA store (a.k.a. their very first QC branch) is set to open its doors on November 26. Mark your calendars!

We first got wind of Decathlon opening a branch north of the Metro through a Facebook post uploaded by the brand's official account on August 28 wherein they initially teased fans about their next store's possible location. Following the confirmation of the sports store's first Quezon City outpost, customers reacted and commented with utter excitement.

To amp up the anticipation in the weeks leading up to the official opening, Decathlon teased customers even more with sneak peeks of their QC store space. In photos posted to the Decathlon SM North EDSA Facebook page, they showed the branch's newly built and and brightly lit "Decathlon" sign out front as well as some portions of the wide space—soon to be stocked with shelves upon shelves of activewear and exercise equipment. For now, we'll be counting down the days until we can finally see it with our own eyes!

Check out the first few photos of the Decathlon SM North EDSA branch:

In the meantime, you can visit Decathlon's other branches in Pasig City, Alabang, and Masinag.