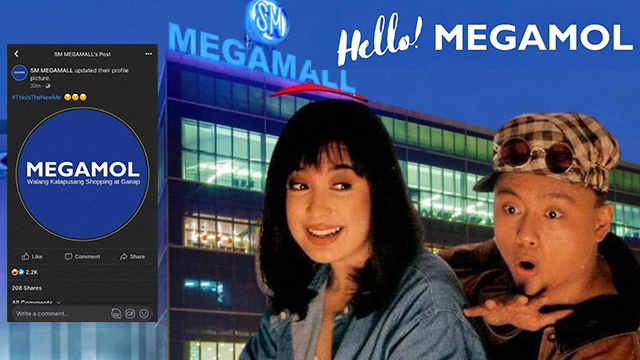 SM Megamall’s Facebook Has, Uh, Rebranded and We Have No Idea What's Going On

And neither does the Internet.

(SPOT.ph) Facebook, inc., the parent company behind social media apps Facebook, Instagram, and WhatsApp, made headlines today after changing their name to Meta, Inc.—but never mind that. The big rebrand that's got us all kinds of intrigued? That of SM Megamall. Or should we say "Megamol?" No, seriously.

Today, October 29, the Mandaluyong mall abruptly changed their profile picture on Facebook to one that reads "Megamol: Walang Katapusang Shopping at Ganap." They captioned it with the hashtag #ThisIsTheNewMe along with three winking emojis.

Shortly before changing their profile picture, SM Megamall also uploaded a photo of the mall's exterior, but not just any photo. It featured actress Sharon Cuneta and rapper Andrew E. overlayed in front of the building with the words "Hello! Megamol" typed out up top.

No, we have no idea what's going on either, but it's clear that the image is referencing the Pinoy slang term from the '90s "gamol," which refers to someone or something disgusting or dirty—Andrew E. famously released a 1990 song called "Wag Kang Gamol." The word spurred a number of '90s films, including 1994’s Megamol where Andrew starred alongside (yup, you guessed it) Sharon Cuneta, who is of course also known as the "mega star."

So okay, we get the references, but why the sudden change? It does seem pretty off-brand for the mall, especially as their posts are usually pretty polished. All in all, we're pretty freakin' confused and so is the Internet—just check out their comments below.

Here's what the Internet had to say about SM Megamall's "megamol" post:

Many folks who saw the post were convinced that the SM Corporation-owned mall may have been hacked. We can't blame them because we're not sure either. It's worth noting, however, that the Facebook page's display name is still "SM Megamall," so they could very well just be trolling us. Still, the truth remains a mystery.

Meanwhile, other commenters were simply in disbelief.

Others, of course, noticed the post coming out on the same day that the brand formerly known as Facebook changed its name. Users pointed out that the "Megamol" rebrand may just be a cheeky nod at all the memes poking fun at Meta, Inc. since its big announcement. Some even said SM Megamall could have been a little more on the nose with their joke and changed their name to "Metamall."

Earlier in the day, ride-sharing app Angkas "changed" their name to Kandong, so maybe SM Megamall is just joining in the fun?

Others got creative and came up with their own names for SM Megamall. What do you think of their pitches?