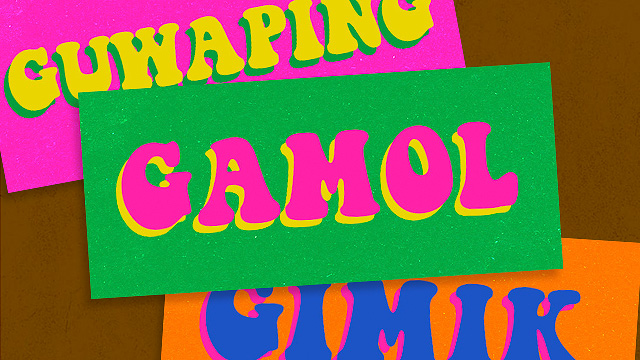 10 Pinoy Slang Words We Said in the '90s, Translated

(SPOT.ph) If the '70s had "repapips" and the '80s had "bagets," the '90s also had its own roster of slang words. It is argued by many as the best decade ever, after all. (Case in point: A 2015 article by The New York Times titled "The Best Decade Ever? The 1990s, Obviously," although this might be more of an American setting.). And while today’s millennials (a.k.a. people currently in their 30s) are struggling to keep up with Gen Z slang, the young ones may also have to learn a thing or two about the colloquial language of the past.

Here are some of the popular '90s words and what they mean:

Turn up the volume, ready your dancing shoes, and play Gary Valenciano's pop song “Hataw Na” (1994). While the dictionary definition of "hataw" is to hit or to strike, the colloquial word refers to doing something with much gusto or to give one's best performance. Fun fact: A film of the same title was released in 1995 starring Mr. Pure Energy Gary V himself.

Back in the '90s, Mark Anthony Fernandez, Jomari Yllana, and Eric Fructuoso were the teen idols of their generation for their looks. The trio was referred to as the "Guwapings," and eventually starred in Guwapings: The First Adventure (1992) and its sequel Guwapings Dos (1993). "Guwapings" came from "guwapo," a Filipino word with Spanish origins that means handsome.

The origin of the word "jologs" has two contested theories. The first is that it may have come from the spelling of diyolog (dilis, tuyo, and itlog), which is similar to how we have coined tapsilog (tapa, sinangag, and itlog) or barsilog (barbecue, sinangag, and itlog). From an economic standpoint, however, it seems uncommon to have two viands, when all you want to do is save up by getting the silog meals. This leads us to the second and more popular theory: that "jologs" refers to fans of Jolina Magdangal (a.k.a. Jolens), who was popular in the '90s for mixing and matching colorful clothes and accessories. Some would say that her fashion statement borders on being tacky, which is why "jologs" is often associated with words like "baduy" or "bakya."

Used as a noun, "gimik" refers to either a hangout or a party. You can drop it like, "Saan ang gimik mamaya?" or "Gimik naman tayo sa Friday?" or "Ayos na gimikan 'yan a." True to form, there's a youth-oriented show from 1996 to 1999 titled Gimik. The show aired every Saturday; and starred Judy Ann Santos, Rico Yan, G. Toengi, Patrick Garcia, Marvin Agustin, Mylene Dizon, and other young personalities back in the day.

"Stir" is a verb that means to mix; and for the '90s generation, "stirero" or "nang-iistir" is someone who stretches the truth or tries to mix the facts and make you believe in a lie. It's up there with "barbero" from the idiomatic expression "kuwentong barbero" or hearsay.

"Praning" refers to someone who's fast becoming paranoid or neurotic, whether because of drugs or just a general state of overwhelming emotion. It became even more popular when Francis Magalona's "Mga Praning," which is about drug addiction, hit the charts in 1992.

"Chicken" (complete with the hand gesture similar to chef's kiss) is a variation of the term "sisiw," which means to say something that's easy to do. Popular sketch comedy Tropang Trumpo on ABC-5 would often use the word in their jingle, "Caronia, Caronia, your beauty shines with Caronia…CHICKEN!" We bet you still remember the dance steps.

KSP, an abbreviation for "kulang sa pansin," refers to someone who's always asking for attention. A has-been star or politician who's trying to claw their way back into the limelight through rumors or scandals can be called KSP.