Fun Pinoy Slang Words from the '70s and What They Mean
Loading
Already a member? Log in
No account yet? Create Account
Spot.ph is your one-stop urban lifestyle guide to the best of Manila. 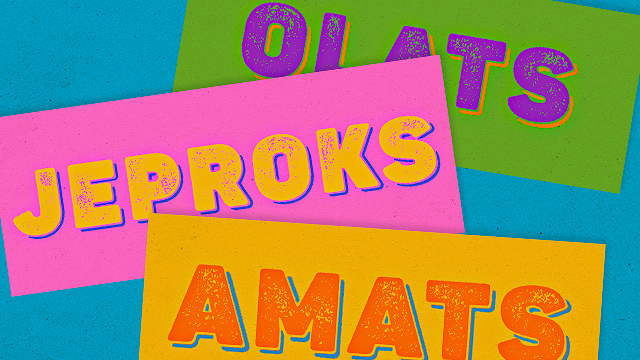 10 Pinoy Slang Words From the '70s and What They Mean

(SPOT.ph) Language, as we know, is constantly evolving—whether through the coinage of new words by younger generations or the invention of phrases to adapt to the times. For example, in a 2020 study by a Far Eastern University student published in the International Journal of English and Comparative Literary Studies, it was concluded that the trending words among Filipino Facebook users were "lodi" and "werpa." Both inverted words gained traction in the last quarter of 2017, when they found their way into the comments section of the social media platform.

But the use of backward speech already gained popularity back in the '70s, when people used words like "erpat," "yosi," and "amats" in day-to-day conversation. Unlike today's use of inverted terms for online conversations, it was quite interesting back then that transposed syllables were used off the top of young Filipinos' heads while actually talking.

Before sakalam and arat, here are 10 Pinoy slang words from the '70s:

Meaning: The state of being inebriated after drinking copious amounts of alcohol.

Meaning: A laid-back young man who grew up in luxury. It was popularized by rock singer Mike Hanopol in the song "Laki sa Layaw," which describes a jeproks as "laki sa layaw, puro sarap." The word is a reversal of "projects," which refers to the government's housing programs (Projects 2, 3, 4, et cetera) in Quezon City. In the '60s, the young ones who lived in these neighborhoods were called jeproks.

Use in a sentence: "Ganda ng chedeng! Jeproks!"

Meaning: Often used as a somewhat derogatory term for someone who dresses excessively or inappropriately, especially in the Philippine climate.

Meaning: An adjective that means good-looking. Unlike most '70s words, sputing is not an inverse of a word, but rather comes from the "sporting" as in "The dashing young man is sporting an American suit."

Meaning: An inversion of "tigas," "astig" refers to someone who is badass, hard, or tough.

Use in a sentence: "Astig naman ng gupit."

Meaning: The inverse of "gutom," as in hungry. Alternatively, the phrase "Tom Jones"—which evolved from "tomguts"—can also be used to express your state of hunger. Yes, as in Tom Jones, the popular British singer.

Meaning: A male friend. The first two syllables in repapips are from "pare," a Tagalog word for a buddy.

Use in a sentence: "Kumusta tayo diyan, mga repapips?"

Meaning: The inverse of the word "talo," olats captures the state or feeling of being an utter failure.

Use in a sentence: "Malas! Olats na naman!"

Meaning: Uncool or out of fashion. It can also refer to someone who's too conservative.