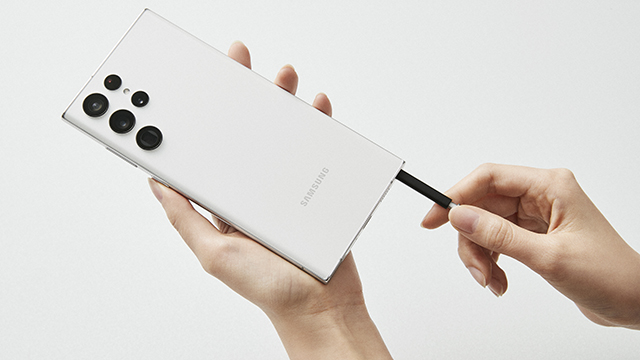 The S22 line features the first-ever S-series smartphone with a built-in S Pen.

(SPOT.ph) Today, February 9, Samsung finally unveiled their newest flagship smartphone line, the Galaxy S22 series. Since the release of the S21—the first model in the S line to be compatible with Samsung's fan-favorite S Pen—industry experts and tech enthusiasts have been speculating that the S series is set to take over the Note's reign as the company’s premiere smartphone model. And yup, the rumors were true—Samsung themselves even hinted at this weeks before the February Unpacked event. The tech giant debuted the first-ever Galaxy S smartphone with a built-in S Pen, incorporating the Note’s DNA into the S series to create a smartphone that combines "the power and productivity of the Note with the camera legacy of the S Series," as president and head of MX business TM Roh put it.

Here's everything you need to know about the Samsung Galaxy S22 Series:

The Samsung Galaxy S22 Series will include three models: the Galaxy S22, the Galaxy S22+, and the Galaxy S22 Ultra—continuing the three-model blueprint set by the S20—with the Ultra being the first S-series smartphone to have a built-in S Pen.

The Galaxy S22 and S22+—the former having a 6.1-inch display and the latter sporting a 6.6-inch screen—both come in four colors: Phantom White and Phantom Black remain staples in the S series, but new shades Green and Pink Gold are also being introduced with the S22. Unlike the S21, the colors on both the main body and the camera setup are identical, creating a more seamless and balanced look. The triple-camera setup on the rear features the lenses arranged in a vertical column. Both devices sports a simple, symmetrical metal frame made out of durable armor aluminum and housed in Corning Gorilla Glass Victus Plus, the latter being exclusive to the S22 series.

Both the S22 and S22+ provide a total of four camera lenses—three on the back and one in front. On the rear, you get a 12-megapixel ultra-wide camera, a 50-megapixel wide lens, and a 10-megapixel telephoto while the front-facing camera makes use of a 10-megapixel lens. The smartphones are built to provide great quality for both video and photo even in low-light settings.

You get intelligent display that provides maximum visibility in any setting

The S22 series' intelligent display works by analyzing your surroundings and optimizing the viewing experience depending on the lighting or time of day. In particular, the display promises excellent outdoor visibility with an algorithm-powered feature called Vision Booster, which adjusts brighten and color contrast on your screen based on your environment and the content you're viewing. Brightness can go all the way up to 1,750 nits—the brightest display on a Galaxy smartphone thus far. You also get a 120Hz refresh rate that provides a smooth viewing experience. Plus, minimum starting rate goes as low as 1Hz in case you ever need to conserve battery power.

The Samsung Galaxy S Series is built with One UI 4 software, which provides users with advanced customization settings and privacy controls. Users will be able to design their ideal mobile experience with tools that allow for personalization of your interface, icons, wallpapers, and overall theme. The Color Palette feature allows you to choose from a wide variety of shades for the menu and icons for a customized look on every app and interface. You also get a wider variety of emojis GIFs, and stickers on the upgraded keyboard.

With privacy being a growing concern for smartphone users in this day and age, the S22 series offers privacy settings that are easier to adjust and more accessible. You’ll get a new privacy dashboard, which brings all privacy settings and controls into one place complete with a graph displaying what apps have access to sensitive features like your camera, microphone, location, and more. Thanks to the all-in-one the dashboard, these permissions can easily be revoked, so you can feel safe using any app at any time. Plus, the S22 now has a camera indicator on the upper right corner—a green dot will appear on your status bar if your camera is being used by an app and you can easily revoke this permission with one tap on the quick panel.

One UI 4 also improve the connectivity between your smartphone and your other gadgets or between your phone and your friends' devices. Samsung worked with Google to develop what’s called the Duo video-sharing feature. To use this, search through your contacts, choose the Duo option, select live-sharing, and choose an app to share to your chosen contact. In seconds, your friends can easily see whatever’s on your screen be it your browser, your notes, or the series you’re currently streaming.

Samsung also teamed up with Microsoft to develop the Link to Windows feature, which lets you use your phone on your PC. That way, you get acccess to mobile apps and features like messages, notifications, and photos right on your computer. You'll even be able to use your PC to make calls on your phone.

As we’ve previously mentioned, the Samsung Galaxy S22 Ultra is the first S-series smartphone to have a built-in S Pen, making the largest model in the series the closest to the Note and its de facto successor. Where the S21 Ultra was only compatible with the S Pen, the S22 Ultra is both compatible with the stylus and has a small chamber built into its body to house the Pen, making it easier to bring everywhere you go.

The S22 Ultra has a 4nm processor—the fastest ever on a Galaxy device—and is made with the same durable metal and glass materials as the S22 and S22+. Where the two smaller models feature a camera system housed in a metallic frame that matches the phones’ bodies, the Ultra’s lenses are built right into the exterior and you get a total of five: a 12-megapixel ultra-wide camera, a 108-megapixel wide lens, two 10-megapixel telephoto lenses, and a 40-megapixel front-facing cam.

You can get expert-level photos with the S22 Ultra thanks to features like Pro Mode, which gives you full control of your camera settings, and the downloadable Expert Raw application, which lets you customize your photo settings and save 16-bit raw files for further editing later on. Plus, with improved Night Mode, you get sharp, saturated snapshots even in low light thanks to the new neural processing unit, which enables AI to better sharpen details and reduce noise in dark settings.

The S22 Ultra's advanced camera setup is especially handy for video-taking. The auto-adjust features allows your lens to set the optimal frame rate for your videos depending on your surroundings. Coupled with the auto-steady feature for minimizing movement and vibration, you get sharp and clear clips every time.

Samsung even teamed up with Snapchat to allow you to have access to native camera features and settings while using the app. That way, you can post stories or send snaps to your friends without comprising brightness or resolution.

The S Pen has also been improved for the Galaxy S22

Though the S22's S Pen has the same 5,000 mAh battery capacity as recent models, the stylus boasts reduced latency—from 9 milliseconds down to just 2.8—allowing writing to feel smoother and more natural. The reduced latency is made possible by enhanced AI-based coordinate prediction technology—which can anticipate the direction in which you'll draw more intelligently compared to previous models—as well as an upgrade of Wacom's handwriting component. The handwriting-to-text feature, which allows users to convert words written with the pen into typewritten text, has also been improved with a higher recognition rate that now works with 88 languages.

With the S22 Ultra, Samsung Notes has two notable new features. First is Quick Note, which allows you to attach or link to content in a pop-up note while using your browser, scrolling through your gallery, or writing messages. All you have to do is use the S Pen to open a pop-up note through aircommand and you'll see the option to attach a link or image to the pop-up, so you get more comprehensive notes for later viewing.

The secon feature is known as Collaborative View, which creates seamless syncing between the S22 ultra and Samsung Galaxy Tab. If you start drawing or taking notes on your tablet, you can use your phone to change up settings like pen color and thickness, so you can adjust your settings without having to interrupt your writing process.

You can start pre-ordering the Samsung Galaxy S22 series today

The Samsung Galaxy S22 Series is available for pre-order online staring today, February 9 until March 3. You can check out the full price list below, but note that these prices are still subject to change.