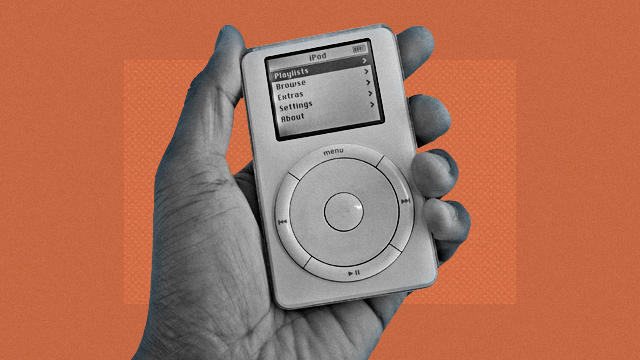 The iPod Is Finally Gone; Here's a Throwback To Really Make You Feel Your Age

(SPOT.ph) As if we aren't already grieving enough this week, now we must mourn the passing of an old friend; a companion who was there for us in our lowest moments, who changed the course of our lives forever, and who—most importantly—fit comfortably into our pocket. We're talking about the iPod, which Apple officially discontinued this week.

I'm sure we all have fond memories of using the scroll wheel to shuffle through songs like The Backstreet Boys' "I Want It That Way," and Kelly Clarkson's "Since U Been Gone," or even Eminem's "Lose Yourself"—which we definitely did not illegally download onto our iPod's via Lime or FrostWire—so this particular end of an era hits a bit different.

Also read:
10 Cool Music Players That Aren't the iPod
Tech Throwback: The Very First iPhone Turns 15 This 2022
The iPad Air 5 Has Arrived in the PH; Here's How Much It'll Cost You

"Music has always been part of our core at Apple, and bringing it to hundreds of millions of users in the way iPod did impacted more than just the music industry—it also redefined how music is discovered, listened to, and shared," Apple Senior Vice President of Worldwide Marketing Greg Joswiak said on the discontinuation of the iPod line in an announcement on May 10.

The portable music player slowly became a worldwide sensation due to the sleek size that came with its 1.8-inch hard drive, as well as how simple the iTunes and Windows compatibility made transferring digital music onto it.

The original iPod already had the now instantly recognizable wheel, along with center select button and four auxillary buttons to pause, play, fast forward, reverse, and head back to menu. That, along with the small LCD screen above it, would become the signature look of most iPod's until the iPod Touch in 2007.

The iPod Classic line eventually reached 160GB of storage before it was discontinued in 2014, but by then it already had baby siblings dominating the market.

The iPod Shuffle was released in 2005 and was even smaller than the Nano, as it did away with the LCD screen and literally just kept the click wheel. Most Shuffle models only had up to 2GB of storage, but it did prove to be a hit with the more budget-minded crowd.

Finally, we have the iPod Touch, which is the model that will soon be off the market, marking the end of the iPod era. The Touch was more of a cousin to the original iPod, as it didn't have the signature click wheel and was essentially just an iPhone without cellular capabalities. The launch of the Touch marked Apple's shift away from devices that weren't multi-purpose (such as an MP3 player),  which is why we are witnessing its discontinuation today as well.

But please don't think that this puts a stop to the music! It's pretty crazy to see how far we've come since the iPod first launched in 2001, but we won't forget the trail it blazed in the world of portable MP3 players and digital music sharing. For now, the most appropriate way we can pay our respects is by playing a 360p video of Sarah McLachlan's "I Will Remember You" while listening through wonky, wired earphones. So long, partner.