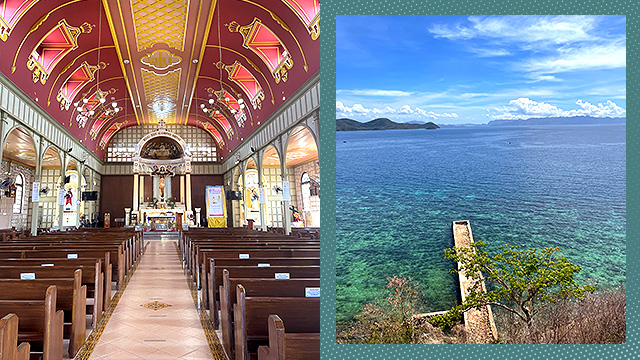 The island of Culion used to be a leprosarium.

(SPOT.ph) A typical Coron itinerary includes its fabled beaches, enchanting rivers, and sun-kissed islands. Little do most visitors to the popular destination know that there is one nearby island that is worth a side trip: Culion.

Located in the northern part of Palawan, it was once known as the "Island of the Living Dead" because of its history as a leprosarium during the American period. But this hidden gem is now emerging from its poignant past as it boasts a well-preserved historical center, pristine beaches, and a peaceful island vibe.

Also read: 10 Places to Stay in Coron for Any Type of Traveler

Culion as the "Island of No Return"

"The main reason why we should visit Culion is its history," said John Lisboa, coordinator of Culion Museum and Archives, in an interview with SPOT.ph.

The town's church, according to him, used to be a Spanish fortress in the 17th and 18th centuries because of its location on the country's western seaboard.

By the American period, the island's location at the northern tip of Palawan, isolation from the rest of the archipelago, and the fact that it was sparsely inhabited became big factors in the decision to make it a leprosarium. The island was so remote that it also earned the moniker "Island of No Return."

On October 27, 1902, the Culion Leper Colony was created under the Director of Health Victor Heiser. Construction didn't start until 1905, and the first batch of patients (all 370 of them) arrived from Cebu only on May 27, 1906. Things were institutionalized when the Philippine Commission approved Act 1711 in 1907, otherwise known as "An Act Providing for the Apprehension, Detention, Segregation, and Treatment of Lepers in the Philippine Islands."  From 1914 to 1921, Culion was believed to be the largest leprosy colony in the world. In 1933, the number of lepers on the island was 7,000.

The colony had two areas: one where most of the patients lived, and Balala, where the healthy personnel resided. In fact, what used to be the most distinguishable landmark on the island was the lower gate. The arch effectively separates the two worlds of Culion: one for the "leproso" (the lepers) and the other for the "sano" (the healthy).

In 1987, with the recommendation of the World Health Organization, the use of a Multi-Drug Therapy—a definite cure for leprosy—was implemented. In 2006, Culion was finally declared leprosy-free by the international agency.

About 300 survivors continue to live on the island. Many of the locals are descendants of lepers who fell in love with each other while in isolation. This was despite a marriage ban that was imposed on the patients in an effort to curtail the spread of the infection.

Despite this haunting past, it was the island’s role as a leprosarium that catapulted it not only to national but to global consciousness as well.

“The island became the mecca of scientists who conducted research and experiments to find the cure for leprosy,” said Lisboa, who is a grandson of a former personnel who assisted the lepers.

With the disease then still incurable and mistaken as hereditary, the lepers were shunned by society. To address this, the doctors, scientists, and missionaries who were based in Culion also found themselves at the forefront of the battle against discrimination.

The island’s distinct history and its people’s bid to ensure its preservation led to Culion’s inscription to the United Nations Educational, Scientific and Cultural Organization Memory of the World Asia-Pacific on May 30, 2018.

At present, Culion is an emerging eco-tourism frontier that takes pride in its history and contribution to the global fight against leprosy.

In an effort to showcase the island as a tourist destination that fully embraces its storied past, it has been given the title "Perlas ng Palawan." "This is [partly] because of its 'precious' accomplishment of being an instrument in finding the cure for leprosy,” Lisboa said.

He explained that a pearl is a perfect metaphor for Culion. "A pearl is formed when dirt or a parasite enters a shell. As a defense mechanism, the mollusk forms a soft mantle to coat the irritant. Layer upon layer of this coating, called mother-of-pearl, encases the irritant and protects it [mollusk] until a pearl takes shape."

Lisboa said that this mirrors Culion as a battleground against leprosy. "When it [Culion] experienced a painful 'irritant' or the dreaded leprosy, the defense mechanism was the heroism of the doctors and scientists who dedicated their lives to the pursuit of a cure."

"Now we are enjoying the fruits of their sacrifices and success and these have become a beautiful part of our history which is the main tourist attraction of Culion."

An Island of the Living Dead No More

Culion is only 45 minutes away by ferry (P180 to P390) from the more famous tropical island of Coron. You may start your day trip with a visit to the Culion Museum and Archives (P100/head for Filipinos; Php200/head for foreigners). Despite its small size, the museum houses five galleries which offer visitors a comprehensive look into the town’s history.

Perhaps the most memorable of the five is Gallery IV, which explores human-interest stories on the island. It presents vignettes of what a normal day on the island was, love stories among leper patients, and painful tales of leper mothers being separated from their healthy babies.

A few meters away from the museum is La Inmaculada Church. Its walls, which are made of corals, were sourced from the old Fort Culion just behind it which was built in 1740. One can go up the ruins of the fortress for a sweeping view of the sea and the mountains.

Visitors can rent a tricycle and ask to be taken around town and its landmarks, while those with the energy to spare may opt for a DIY walking tour.

Near the museum and the church are several historic sites like the Culion Sanitarium and General Hospital; remnants of the Old Presidencia, which used to be the leper colony's prison; and the Sandoval House, which was converted into a police station.

Also nearby are the 330 steps up Aguila Hill and its now-iconic Philippine Health Services logo. Reaching the summit rewards visitors with a breathtaking view of the island and its surroundings.

For travelers who are staying the night, Lisboa suggests diving at the coral garden of Bogor Marine Park the next morning. The dive site is known for its thriving coral reef and diverse marine life. Chances are high for one to swim with eels, turtles, puffers, and even leopard and guitar sharks.

"During the rainy season, you can visit our waterfalls. If you come in the summer, trekking and mountain climbing and stargazing at night are some of the highly recommended activities," he suggested.

Lisboa said that they are cooperating with the Department of Tourism for the program called Tourism Circuit or Clustering. Efforts involve the promotion of the entire Calamian Group of Islands, which include Coron, Busuanga, Calauit, Malcapuya, and Culion among others. They are also working with the National Historical Commission of the Philippines for the preservation of the island's historical sites and structures.

He shared that part of their advocacy is responsible and sustainable tourism. "These come with an emphasis on preservation, protection, and conservation of the environment, values, and historical sites," the Culion native said.

"What I want people to remember about Culion is its unique contribution to humanity through the cure of leprosy. It embodies a history of struggle for human dignity. That’s why we continue to call on all travelers to change their perception and foster an environment free from stigma and discrimination by discovering Culion."