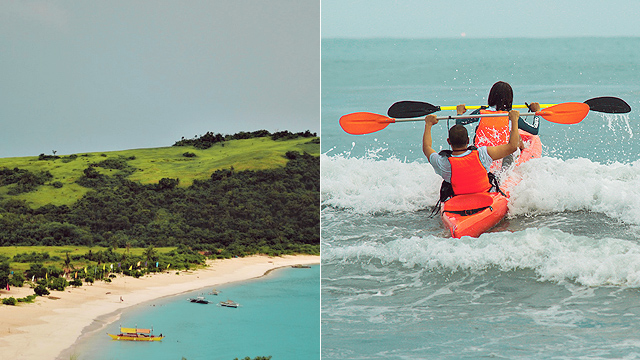 10 Exciting Things to Do in Camarines Norte

It's where you can find Rizal's first-ever monument.

(SPOT.ph) There was a time when Camarines Norte was a mere pit stop for a meal or toilet break for travelers on their way to other provinces in the Bicol Region. Now, CamNorte—as it is fondly called—has become its own tourist destination popular for its white-sand beaches, picturesque islands, and small-town charm. It was even proposed that it be declared as the Surfing Capital in the Bicol Region, proving that it's no longer living under the shadows of its more popular neighbors like Camarines Sur (known for the islands of Caramoan) and Albay (known for the Mayon Volcano).

Here are 10 things you can do in Camarines Norte:

Ride the waves in Bagasbas

Bagasbas Beach in Daet boasts a three-kilometer stretch of fine gray sand and swells that rise from three to eight feet on a good day. The coast also features a laid-back vibe, so don't be surprised to see skaters practicing their tricks and locals carrying their boards along the boulevard before sundown.

Walk along a pink-sand beach

One of the Philippines' best pink-sand beaches is located on Parola Island (a.k.a. Tailon Island), which is about 30 minutes away from mainland Camarines Norte. It is also popular for the old lighthouse along its coast, thus the name. You can travel to Turayog View Deck, where you can stay the night and enjoy the best view of the town of Panganiban.

Bask under the sun in Calaguas

Calaguas Group of Islands, a chain of 17 islets and islands in the Pacific Ocean, is the main reason why CamNorte came into the limelight in recent years. Halabang Baybay of Tinaga Island, the tourist hotspot in the Calaguas Group of Islands, would remind anyone of good ol’ Boracay with its powdery white sand, minus the maddening crowd. It can be reached via two-hour boat ride from the towns of Vinzons or Paracale.

Siete Pecados, not to be mistaken for island destinations of the same name in Coron, is located just 30 minutes away from Mercedes port. It is also known as Mercedes Group of Islands, the most popular of which is Apuao Pequeña. You can go snorkeling to explore the pristine coral gardens or paddle around the islands on a kayak.

The province’s rugged terrain has gifted it with enchanting waterfalls. The most popular of these is the 70-foot Colasi Falls in Mercedes, which entails two hours of trekking. Don’t worry—the fresh mountain air and crystal-clear water at the end are well worth the effort. Other waterfalls to check out are Nacali in San Lorenzo Ruiz, San Felipe Twin Falls in Basud, Maligaya in Labo, and Mananap in San Vicente.

There's kayaking and surfing, but in Camarines Norte, you can also try surf kayaking. This sport lets you use boats in surf zones to ride the waves. Just maneuver the kayak with your paddle and keep your balance so you don't get wiped out. But don’t worry about being swept away by the waves, the beach has a shallow, sandy bottom.

Have a relaxing dip in Camarines Norte’s natural pools

Laze around natural pools at Dagotdotan Spring Resort and Mampurog River in San Lorenzo Ruiz and Sinagtala Resort in Labo. The cool water can do wonders for your tired muscles. The rocks in the shallow river make for safe dipping areas, too.

Pay homage to the Black Nazarene

If the sea of devotees on Quiapo Day scares you, Capalonga has its own religious festival to honor the image of the Black Nazarene. Locals flock to the Shrine of Jesus the Black Nazarene of Capalonga every first Sunday of the month, and on its feast day on May 13. Other places to visit in the area are the seven-hectare mangrove forest, a bird sanctuary on Pulong Guijanlo Island, and Punta de Jesus—believed to be the site of the tree from which the statue of the Black Nazarene was carved.

Bicol cuisine is among the tastiest regional cuisines, with its distinctive use of chili pepper and coconut milk. Complete your journey with signature dishes such as laing, tinuktok (ground shrimp or crab wrapped in gabi leaves and cooked in gata), and kinunot (manta ray cooked in coconut milk), sinantol (ground santol meat with gata). Among the popular restaurants in Daet are King Fisher for seafood, Kay Sarap and Pratesi for Filipino dishes, and Chef Mama for fusion food such as Bicol-style pizzas and pastas.

Rizal Monument in Luneta (formerly Bagumbayan) is probably the most popular memorial for the fallen hero, but it is not the first scultpure that was built to honor Jose Rizal. You can actually find the Philippines'—and the world's—first Rizal monument on the corner of Magallanes and Justo Lukban Streets, near the Municipal Hall of Daet, Camarines Norte. Locally known as "Bantayog," it was unveiled on December 30, 1898, to mark the hero's second death anniversary. It stands at about 20 feet and features a three-tiered stone pylon with a square base, a three-sided pyramid in the middle, and a seemingly lopsided pyramid at the top. The podium also bears the title and publication year of Rizal's two novels Noli Me Tangere and El Filibusterismo and of "Morga," which is an annotation of Antonio de Morga's Sucesos De Las Islas Filipinas. The structure was declared a national historical landmark in 1961, and elevated into a national monument in 2008.

How to get there: Bus lines like DLTB, Philtranco, and Superlines have daily trips to Daet, Camarines Norte. This takes about nine to 10 hours. You can also travel by plane to Naga, then ride a bus or van going to Daet for two hours.