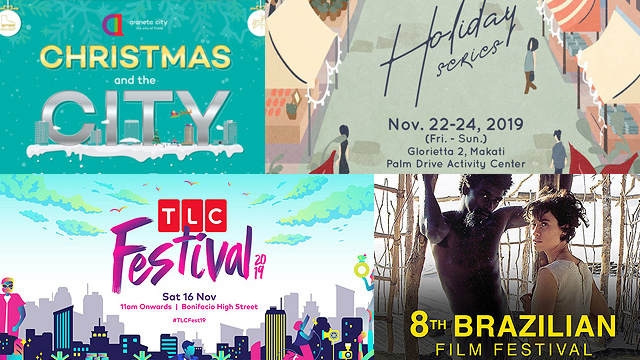 10 Free Things to Do This November

(SPOT.ph) Whether you’re saving your money for the holidays, or just want to try something new without breaking the bank, there’s something going on in Manila that’s likely to appeal to you. This month, take your pick from foreign film festivals, interesting lectures and workshops, and even weekend markets to kickstart  your holiday shopping.

We round up 10 activities in Manila that you can do for free this November:

Take your love for anything Korean to another level

Who doesn’t love Korean-anything these days? Whether you love everything from Korea or are just curious about the buzziest Korean films this year, you can catch a screening or two during the Korean Film Festival this month. Films like Miss Granny, Architecture 101, and Parasite are up for screening during this two-day fest.

Planning on experiencing winter in Japan this year? Prepare for your trip by brushing up on your Japanese skills! Jellyfish Education Philippines, Inc. is hosting a free Basic Japanese Class. Slots are very limited, so sign up now if it’s something that’s on your bucket list. If you aren’t able to register, just follow Quezon City Public Library on Facebook for future class schedules.

Basic Japanese Class is on November 11, from 5 p.m. to 11 p.m. at the Quezon City Hall Compound, Barangay Central, Quezon City. Pre-registration is required.

Join a walking tour of Intramuros

Got booze lying around? Why not trade that in for a free walking tour of Intramuros? Puesto Manila and WanderManila are teaming up for a tour that's not your typical historical tour of the Walled City. You’ll find secret attractions, food finds, hidden museums, and more.

The Puesto/WanderManila Anniversary Tour is on November 10 at 4 p.m. at Puesto Manila, Intramuros, Manila City. To join, just bring a bottle of wine or alcohol in exchange.

Attend a workshop on a local living tradition

Curious about our local living traditions? You can watch demonstrations by current practitioners aside from taking free workshops this month. Likha-an sa Intramuros presents a series of workshops on traditional arts. This month, they’re offering two workshops: Pottery Demo for Healing on November 8, and Inukit sa Dayap ng Bulacan on November 22.

You don’t just have your pick of local cinema or Hollywood blockbusters in Manila, there’s almost always a foreign-language film festival running where cinephiles can experience world cinema. This month, it’s German Film Week and its opener, the 2018 film Balloon by Michael “Bully” Herbig is screening for free on November 6, 7 p.m. at SM City Manila on a first come, first served basis.

The 4th German Film Week runs from November 6 to 11 at SM City Manila, Ermita, Manila City and SM Megamall, Ortigas, Mandaluyong City. While admission to Balloon is free, tickets to the rest of the films are at P100.

Who doesn’t like music festivals? It’s a full day of everything we love: food, music, and art. TLC Festival is bringing you live music from acts like IV of Spades and Rico Blanco. Food stalls and booths for arts and crafts will also be available.

The 2019 TLC Festival is on November 16, from 11 a.m. onwards, at Bonifacio High Street, Bonifacio Global City.

Turn your love for wildlife documentaries into a hobby

Find out more about Brazilian culture

The month of November is indeed filled with film festivals as another three-day movie event fills up our calendar. The 8th Brazilian Film Festival is set to showcase the best of Brazilian cinema through four films: Casa de Areia, Vinicius, Nao por Acaso, Romance, and O Palhaco.

Learn how you can celebrate Christmas the eco-friendly way

The holidays usually mean more consumption and waste, but it doesn’t have to be that way! You can celebrate the holidays with gifts that are eco-friendly and sustainable. The Good Trade's Christmas edition of their zero-waste and sustainable fair features talks and workshops where you can learn practical tips on environment preservation. You can also bring your pile of recyclables (such as aluminum tin cans, PET bottles, e-waste, used paper, old newspaper, books, and magazines) and clothes, shoes, and bags for donation to the fair.

The Good Trade Holiday Series is from November 22 to 24 at Glorietta 2, Ayala Center, Makati City.

Araneta Center lights up its giant Christmas tree as early as November through a grand celebration. Joining the festivities are Anne Curtis and Idol Philippines champion Zephanie, with hosts Fifth Solomon and DJ Chacha. Stay for the fireworks display to cap off the night.