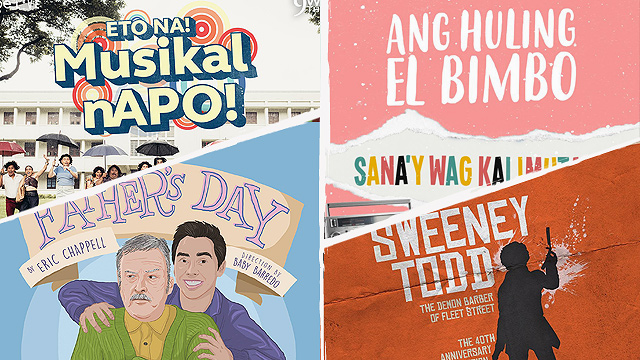 Theater Preview: 10 Plays and Musicals to Watch in 2019

(SPOT.ph) 2018’s theater lineup may have left our wallets empty, but it has definitely kept our hearts and minds inspired. Remember when your jaw dropped when the curtains opened for The Lion King or when you cried (a lot) while watching Dekada '70 and Desaparesidos? Well, the next theater season is going to give us another great year of international musicals and all-original Filipino productions. As we always say, ready your wallets!

Andrew Lloyd Webber's The Phantom of the Opera returns to Manila as part of its long-awaited Asian tour. The award-winning musical is based on the French novel by Gaston Leroux, which tells the story of the Paris Opera House's "Phantom" (Jonathan Roxmouth) as he tries to get closer to vocalist Christine Daaé (Meghan Picerno). The young soprano, however, falls for arts benefactor Raoul (Matt Leisy).

The Phantom of the Opera opens on February 20, 2019 at The Theatre at Solaire, Solaire Resort and Casino, 1 Aseana Avenue, Parañaque City. Tickets, priced from P1,900 to P7,250, are available through Ticketworld.

After a successful run in March, Silent Sky returns to the stage to inspire women everywhere. The true-to-life play follows Henrietta Levitt, an astronomer at Harvard College Observatory whose mathematical work in the early 1920s paved the way for the discovery of the existence of other galaxies. Not to be mistaken for another equally empowering film, Hidden Figures, which is set in '60s Virginia, Silent Sky dials back to four decades earlier to the long-standing norm of gender inequality.

Back by popular demand, Robert Seña, Nonie Buencamino, Bo Cerrudo, Jett Pangan, and Carlo Orosa rock the stage once again in a theatrical biopic of the fictional '80s male group band The Bench Boys. After being apart for some time, they have to do a one-time concert for an ailing member. Now in their '50s, the question is, can they still do it?

After a short but successful run in August, Eto Na! Musikal nAPO! returns to the stage to take the audience on a '70s throwback through songs of Filipino musical group APO Hiking Society. Expect an homage to one of the dreariest yet most hopeful decades in our history—bell-bottomed jeans, platform Oxfords, Chuck Taylors, peace signs and doves, protest cards, and "Bayan Ko" on loop. This masterpiece by writer-director Robbie Guevara is proof that great jukebox musicals come from the perfect marriage of hit songs and a well laid-out story.

Ang Huling El Bimbo, which—despite not being your usual musical—enjoyed more than a handful of sold-out shows in July, returns to the stage in March 2019. It tells the story of three friends as they reflect on their college days while singing and dancing to the songs of the Eraserheads.

Father's Day sees the return of theater veteran and Repertory Philippines co-founder Baby Barredo to the director's chair. The Oliver Hailey original tells the story of ahilarious reunion between a divorced man (Miguel Faustmann) and his estranged family on Father's Day.

With Bobby Garcia at the helm, Atlantis Threatrical Entertainment Group stages the first part of Tony Kushner's Angels in America. The Tony Award-winning play follows the life of one Louis Ironson (Nelsito Gomez) who abandons his AIDS-stricken lover, Prior Walter (Topper Fabregas). It is set in mid-1980s Manhattan and revolves around hard-hitting themes of homosexuality, drug addiction, and faith.

After a comic play, Repertory Philippines stages British drama The Dresser for its 82nd season. It centers on the complicated relationship between a tormented thespian and his loyal dresser, which will be played by Teroy Guzman and Audie Gemora, respectively. It is directed by Loy Arcenas, whose movie musical Ang Larawan won Best Picture at the 43rd Metro Manila Film Festival.

Beautiful traces the life and career of singer-songwriter Carole King (you may know her as the voice behind Gilmore Girls' theme song "Where You Lead"). This Douglas McGrath jukebox musical focuses on the artist's journey leading up to when she was inducted into the Rock and Roll Hall of Fame.

Stephen Sondheim’s Sweeney Todd opens in Manila just in time for the classic musical's 40th anniversary, having first opened on Broadway in 1979. It is based on the 1973 play of the same title, which tells the disturbing tale of Sweeney Todd (Jett Pangan) who murders people and has Mrs. Lovett (Lea Salonga) bake the bodies into meat pies to sell to the unsuspecting public.

Sweeney Todd opens in October 2019 at The Theatre at Solaire, Solaire Resort and Casino, 1 Aseana Avenue, Parañaque City. For updates, check out Atlantis Theatrical on Facebook.