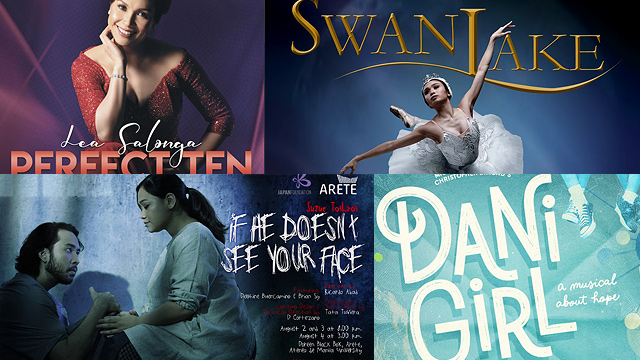 Theater in Manila: Exciting Shows to See Onstage This August

From a kid-friendly musical to an all-original steampunk masterpiece.

(SPOT.ph) While all-original Filipino musicals kept us occupied in the month of July, the rainy season of August is bringing us foreign shows adapted for the Philippine stage by our talented directors and actors. This ranges from the family-friendly musical based on the Dreamworks favorite Madagascar to a heart-wrenching story about a young girl battling the Big C. We're also up for a steampunk musical about the life of a Filipino hero, which is just in time for the celebration of Buwan ng Wika.

Here's your guide to musicals and plays that are worth seeing this August:

If He Doesn't See Your Face

Suzue Toshiro’s If He Doesn’t See Your Face asks the hard questions about long-distance relationships, and it's not just any other "LDR." In this two-hour play, Yasuyo (Delphine Buencamino) visits her husband, Tatsuya (Brian Sy), in prison where they are separated by a glass window. A heated conversation arises, with questions ranging from why Tatsuya steals to how long their marriage can last. The English translation of If He Doesn’t See Your Face was personally given by Toshiro to director Ricardo Abad.

Madagascar: A Musical Adventure, which is based on the Dreamworks movie released in 2005, follows the journey of Alex the Lion, Marty the Zebra, Melman the Giraffe, and Gloria the Hippo as they break free from the Central Park Zoo and explore the world outside. It is written by Kevin del Aguila, with original music and lyrics by George Noriega and Joel Someillan, and directed by Steven Conde. Get ready to see penguins and lemurs dancing to catchy tunes.

Dani Girl was first staged by The Sandbox Collective in 2014, and revisiting it couldn't have come at a better time now that the theater company is celebrating their fifth anniversary. Directed by Toff De Venecia, it follows the dreamlike adventure of Dani Lyons (Rebecca Coates, Felicity Kyle Napuli), a nine-year-old girl battling cancer. Her best friend, Marty (Luigi Quesada, Daniel Drilon), joins her as they go on a quest to find her hair and answer the question, "Why is cancer?"

Dancing Lessons, a two-character play by Mark St. Germain, follows the story of science professor Ever Montgomery (Randy Villarama) and his neighbor, Broadway dancer Senga Quinn (Jill Peña). Just days away from attending an awards ceremony, Ever seeks the help of Senga to teach him how to dance. But the lead character has Asperger's Syndrome, preventing him from feeling comfortable with Senga—even when they're just holding hands for a dance.

Mabining Mandirigma, a "steampunk musical" about the heroism of Apolinario Mabini, returns to the stage after a successful run in 2016. The lead role is still played by a woman—for this run, veteran actress Monique Wilson takes the spotlight. It brings to light the struggle of Mabini—often reductively dubbed as the "sublime paralytic"—as he envisions a different kind of revolution during the Philippine war against Spanish and American colonization.

Mabining Mandirigma runs from August 16 to September 1 at Tanghalang Aurelio Tolentino, Cultural Center of the Philippines, Roxas Boulevard, Pasay City. Tickets, priced from P1,000 to P1,500, are available through Ticketworld.

To celebrate their 50th season, Ballet Philippines restages a classical piece that has always been in the company's repertoire since 1978. Swan Lake features dancers from Mariinsky Ballet (formerly Kirov Ballet), Andrey Ermakov and Elena Evseeva, as well as homegrown talents, Denise Parungao and Jemima Reyes.

Swan Lake runs from August 30 to September 8 at Tanghalang Nicanor Abelardo, Cultural Center of the Philippines, Roxas Boulevard, Pasay City. Tickets, priced from P500 to P3,000, are available through Ticketworld.

13th of September is a reimagination of Lanie Robertson's one-act play The Insanity of Mary Girard, which is a real-life story about Mary Girard. On her last night at the Pennsylvania Asylum, where she was admitted in 1790, she relives true and false memories of her husband, who declared her legally insane; and a baby girl she gave birth to while in confinement but died five months later.