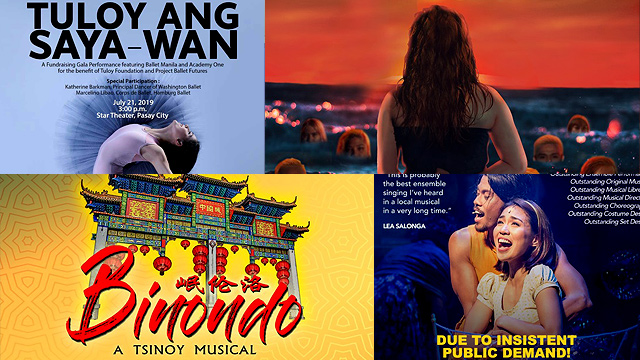 Theater in Manila: Exciting Shows to See Onstage This July

From exciting adaptations to an enthralling ballet performance!

(SPOT.ph) Theatergoers in Manila were pretty busy in the last days of June as the Virgin Labfest once again amazed us with sold-out shows during its three-week run. While we're still finding our bearings, a long list of all-original Filipino musicals is ready to book all our weekend nights. There's also a theatrical adaptation of a Lorca novel, a Manila rerun of a two-woman play, and a fundraising ballet show to occupy ourselves with the rest of the month.

Here's your guide to musicals and plays that are worth seeing this July:

Playwright Layeta Bucoy adapts Federico Garcia Lorca's famous novel Bodas De Sangre (1932) into a play. This tragedy by the Spanish dramatist tells the story of a young woman and two men fighting for her attention. It goes into how societal norms keep her from being with the man she truly loves. El Mar De Sangre is choreographed by Christine Crame and directed by Tuxqs Rutaquio.

Ang Huling El Bimbo, an all-original Filipino musical told through songs by Eraserheads, returns to the stage for the third and final time this July. The musical, written by Dingdong Novenario and directed by Dexter Santos, follows the story of three friends: Emman (OJ Mariano), Hector (Gian Magdangal), and Anthony (Jon Santos), who find themselves in an unlikely mini-reunion 20 years after their college graduation. A feel-good trip down memory lane turns sour after they're reminded of what happened on the last day of school.

In case—for some unknown reason—you never found the time to watch Rak of Aegis in its past six runs, this is your chance! This Filipino musical puts together songs from the '90s band Aegis to tell the story of fictional Barangay Venizia, which has been submerged in floodwater for two months. In an attempt to escape this nightmare, one of the residents, Aileen, tries to become a YouTube sensation, and a politician makes her dreams come true—sort of. Rak of Aegis was inspired by events that followed Typhoon Ondoy in 2009. Ten years later, public officials still make the same empty promises and citizens just hope for the best. Randy Santiago, Noel Cabangon, Bayang Barrios, and Jenine Desiderio join the 2019 production.

Rak of Aegis runs from July 5 to September 29 at the PETA-Phinma Theater, Philippine Educational Theater Association, No. 5 Eymard Drive, New Manila, Quezon City. Tickets, priced from P1,000 to P2,500, are available through Ticketworld.

Interaction between the Chinese and Filipinos started in the ninth century when bartering spices, housewares, and other produce was the basic means of trade. By the 16th century, a significant population of Chinese migrants settled on Philippine soil, giving birth to the Chinese Filipinos that we know today. Binondo: A Tsinoy Musical, directed by Joel Lamangan and written by Ricky Lee, sheds light on the plight of Chinese Filipinos amid racial prejudice and political turmoil. It follows the love triangle between Lily (Shiela Valderrama-Martinez), her great love Ah Tiong (Arman Ferrer), and a childhood friend named Carlos (Noel Rayos).

Binondo: A Tsinoy Musical runs from July 12 to 14 at The Theater at Solaire, Solaire Resort and Casino, 1 Aseana Avenue, Parañaque City. Tickets, priced from P800 to P5,000, are available through Ticketworld.

Stop Kiss, a 1992 play by American playwright Diana Son, was first produced in Manila in 1996 under the direction of Monique Wilson. Sixteen years later, actresses Missy Maramara and Jenny Jamora are starring in the play once again—except this time, they're switching roles. Stop Kiss follows the story of New Yorkers Callie and Sara who, after sharing a kiss for the first time, are attacked by an angry bystander, causing one of them to fall into a coma. If it sounds familiar, that's because violence against women and LGBTQ+s still persists to this day—proving just how much we need plays like this.

Ballet Manila and Academy One come together for a fundraising performance for the benefit of Tuloy Foundation and Project Ballet Futures. Tuloy Foundation provides food, shelter, and training for kids nine to 18 years of age at a 10-dormitory complex in Muntinlupa City, while Project Ballet Futures is a dance scholarship program started by Ballet Manila in 2008. Headlining Tuloy ang Saya-wan are Katherine Barkman from The Washington Ballet and Marcelino Libao from Hamburg Ballet.