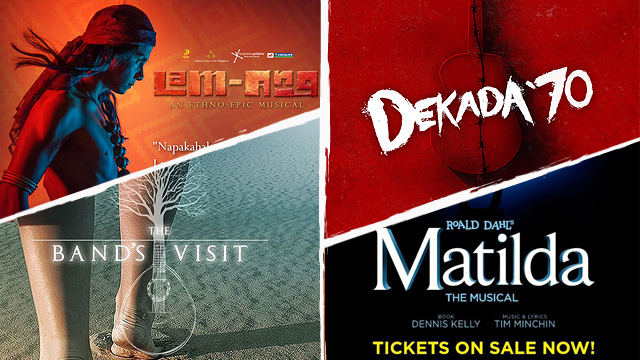 Theater Preview: 10 Plays and Musicals to Watch in 2020

As we always say, ready your wallets!

(SPOT.ph) 2019 was a very busy year for theater-goers, and even for those just getting into the habit of watching back-to-back shows every weekend. The year's lineup may have left our wallets empty; but let's face it, we'd do it all over again, especially with what the next theater season has in store for us. Mark your calendars and get ready for another 12 months of world tours, all-original Filipino productions, and local adaptations of your favorite shows.

Based on Lualhati Bautista's 1983 novel of the same name, Dekada '70 first ran at Ateneo de Manila University's Doreen Black Box Theater in September 2018, just in time for the 46th anniversary of late dictator Ferdinand Marcos' declaration of Martial Law. Through meaningful lyrics arranged in various musical genres (from rap to ballad and even electronic), it tells the story of how a middle-class family chose not to turn a blind eye on what was happening in the country during the Marcos regime. Dekada ‘70 is written and directed by Pat Valera (Mula sa Buwan).

Based on the 1988 children's novel of the same title by Roald Dahl, Matilda, The Musical follows the story of a little girl with amazing intelligence and telekinetic powers. It was first staged by the Royal Shakespeare Company in Stratford-upon-Avon for a 12-week preview in 2010, before its West End premiere in November 2011 at Cambridge Theatre in London and Broadway premiere in April 2013 at Shubert Theatre in New York. The international tour has been to South Africa, Singapore, China—and soon, the Philippines.

Matilda, The Musical opens on March 5, 2020 at The Theatre at Solaire, Solaire Resort and Casino, 1 Aseana Avenue, Parañaque City. Tickets, priced from P1,800 to P6,000, are available through Ticketworld.

Anna in the Tropics by Cuban-American playwright Nilo Cruz looks at an interesting 1930s tradition started by Cuban immigrants working in a cigar-making factory in Florida: a book-reading session led by a well-dressed lector. In the play, the new lector named Juan Julian reads Leo Tolstoy's Anna Karenina to them—which starts to intertwine with the equally scandalous lives of his listeners. Joey Mendoza takes the director’s chair for this staging.

Anna in the Tropics runs from March 13 to April 5, 2020 at Onstage Theater, Greenbelt 1, Paseo de Roxas Street, Makati City. Tickets, priced from P1,000 to P2,000, are available through Ticketworld.

Veteran artist Menchu Lauchengco-Yulo takes the role of Dina in the Tony and Grammy Award-winning musical The Band's Visit. With music and lyrics by David Yazbek and script by Itamar Moses, the piece tells the story of the Alexandria Ceremonial Police Orchestra's arrival in Israel for a concert. But when no one shows up to welcome them at Tel Aviv's central bus station, the group goes off on their own, and eventually reaches an isolated desert town where they're taken in by locals. The Band’s Visit is directed by Bobby Garcia.

Nikki Gil and Gian Magdangal team up in REP's staging of Carousel by Richard Rodgers and Oscar Hammerstein II. This musical follows the love story of carousel barker Billy Bigelow and millworker Julie Jordan, and the tragedy that falls on them in the hands of New England's people. Toff de Venecia takes the helm for this production.

Lionel Bart's Oliver!, based on the novel Oliver Twist by Charles Dickens, follows the story of a malnourished orphan working as an apprentice to a coffin maker. He eventually escapes to London and starts roaming the street with thieves and pickpockets. Oliver! won a Tony Award for Best Original Score in 1963.

Nicolas B. Pichay's Maxie the Musical, based on the 2005 film Ang Pagdadalaga ni Maximo Oliveros by Michiko Yamamoto, is returning to the stage seven years after it premiered at the PETA Theater Center. The story revolves around Maxie, a gay teen who is torn between protecting his family and falling in love with a young cop. Dexter M. Santos reprises his role as the director of the musical adaptation.

After a limited two-week run in December, Lam-ang—an ethno-epic musical by Eljay Castro Deldoc and Jen Darlene Torres—is returning to the stage in 2020. It stars JC Santos as the hero of the Ilocano epic.

Cuban-fusion pop music takes center stage in this jukebox musical based on the lives and songs of 26-time Grammy Award-winning husband-and-wife team Gloria and Emilio Estefan. Get ready to, well, "Get on Your Feet" with the songs "Conga," "1-2-3," and "Rhythm Is Gonna Get You" when this staging opens.