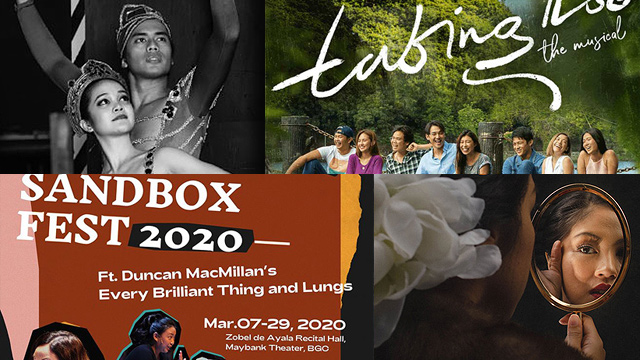 From an adaptation of a book to a teleserye-turned-musical.

(SPOT.ph) After a busy February, you can finally catch your breath from all the back-to-back gala nights and show openings that the National Art Month had in store. But not for long. For March, you can choose from an interesting mix of musical adaptations, music-inspired plays, and a couple of stories that'll get you right in the gut.

Here are the shows we’re excited to see this March:

Based on the 1988 children's novel of the same title by Roald Dahl, Matilda, The Musical follows the story of a little girl with amazing intelligence and telekinetic powers. It was first staged by the Royal Shakespeare Company in Stratford-upon-Avon for a 12-week preview in 2010, before its West End premiere in November 2011 at Cambridge Theatre in London and Broadway premiere in April 2013 at Shubert Theatre in New York. Matilda, The Musical has wowed audiences of all ages in the U.S., Australia, New Zealand, South Africa, Singapore, and the United Kingdom—and soon, the Philippines.

Matilda, The Musical runs from March 5 to 22 at The Theatre at Solaire, Solaire Resort and Casino, 1 Aseana Avenue, Parañaque City. Tickets, priced from P1,800 to P7,000, are available through Ticketworld.

Veteran artist Menchu Lauchengco-Yulo takes the role of Dina in the Tony and Grammy award-winning musical The Band's Visit. With music and lyrics by David Yazbek and script by Itamar Moses, the piece tells the story of the Alexandria Ceremonial Police Orchestra's arrival in Israel for a concert. But when no one shows up to welcome them at Tel Aviv's central bus station, the group goes off on their own, and eventually gets to an isolated desert town where they're taken in by locals. The Band’s Visit is directed by Bobby Garcia.

Anna in the Tropics by Cuban-American playwright Nilo Cruz looks at an interesting 1930s tradition started by Cuban immigrants working in a cigar-making factory in Florida: a book-reading session led by a well-dressed lector. In the play, the new lector named Juan Julian reads Leo Tolstoy's Anna Karenina to them—which starts to intertwine with the equally scandalous lives of his listeners. Joey Mendoza takes the director’s chair for this staging.

Anna in the Tropics runs from March 13 to April 5 at Onstage Theater, Greenbelt 1, Paseo de Roxas Street, Makati City. Tickets, priced from P1,000 to P2,000, are available through Ticketworld.

Ballet Philippines, on their 50th Season, brings back the dance-musical masterpiece Rama Hari. It is based on the timeless love story of Rama and Sita, but with a local touch. This celebrated production, which was first staged in 1980, is the creation of four National Artists: Bienvenido Lumbera for the libretto, Salvador Bernal for the production design, Ryan Cayabyab for the music, and Alice Reyes for the direction and choreography.

Rama Hari runs from March 20 to 29 at Tanghalang Nicanor Abelardo, Cultural Center of the Philippines, Roxas Boulevard, Pasay City. Tickets, priced from P500 to P3,000, are available through Ticketworld.

Every Brilliant Thing and Lungs

The Sandbox Collective is restaging two masterpieces by English playwright Duncan MacMillan: Every Brilliant Thing and Lungs, which are part of Sandbox Fest 2020. Every Brilliant Thing takes us to the world of Angela (alternately played by Teresa Herrera and Kakki Teodoro), who starts listing down every brilliant thing that makes life worth living in an effort to cope with her mom's struggles with depression. Lungs follows a 90-minute rapid-fire conversation between a couple (Jake Cuenca and Sab Jose) while they decide if it's just right to bring a child into the world we currently live in.

Network giant ABS-CBN tries its hand at theater through a musical adaptation of '90s teen drama Tabing Ilog. While it's still about the friendship of Eds, Rovic, Badong, Fonzy, James, George, and Corinne, this iteration of the weekend drama also discusses issues that plague our youth today—from mental health to the dwindling environment. The first production under Teatro Kapamilya, it is written by Jade Castro; with music and lyrics by Vince de Jesus; and direction by Topper de Jesus.

Theater Musical Paranaque Pasay Makati Bonifacio Global City Quezon City Savvy Seasoned
Your Guide to Thriving in This Strange New World
Staying
In? What to watch, what to eat, and where to shop from home
OR
Heading
Out? What you need to know to stay safe when heading out