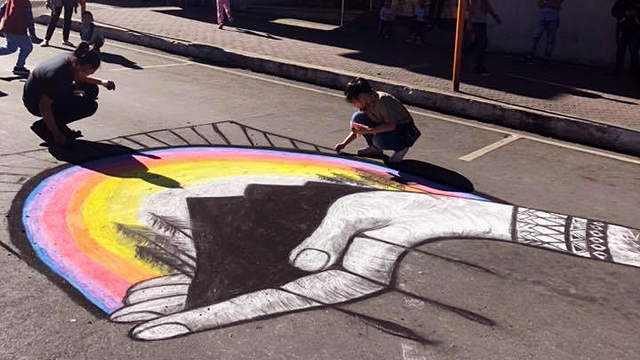 Aside from other important issues.

(SPOT.ph) Baguio City in Benguet continues to live up to its name as a United Nations Educational, Scientific, and Cultural Organization-declared Creative City, as local artists and residents spent this past weekend creating art on Session Road. The Chalk Brigade, initiated by Eudaimonia Art Gallery, happened on Sunday, December 8 at 7 a.m.

One of the sketches showed the mountains of Baguio cupped in the hands of a Cordilleran, reflecting the importance of environmental preservation especially amid growing pressure to cut down pine trees. A rainbow in the backdrop brings a message of hope that someday the pristine hills of the city will be back to what they once were.

"Amazing how we all come together like an army of artists equipped with chalk in our hands and love for art in our hearts," organizers said in a Facebook post. Participants include members of Pasakalye Creatives and Art Lovers Baguio Chapter, art groups from Saint Louis University, students from Baguio College of Technology, and other art collectives. The event failed to beat Germany's current world record for having the largest display of chalk pavement art with 944 drawings, but it was still a notable moment in Baguio's art landscape.

Sulong Likha and Pedantic Pedestrians, on December 7, released a joint statement of support for Panday Sining—members of which were arrested after painting protest art on public walls and structures—and the importance of public art and protest art. "We claim that art cannot be reduced to passivity, rendered silent especially during these times of subtle political unrest. When activists, human rights workers, farmers, students, lawyers among other critics of the government are being harassed, red-tagged or killed, art cannot confine itself to the perfection of forms and the mastery of technique," they said.