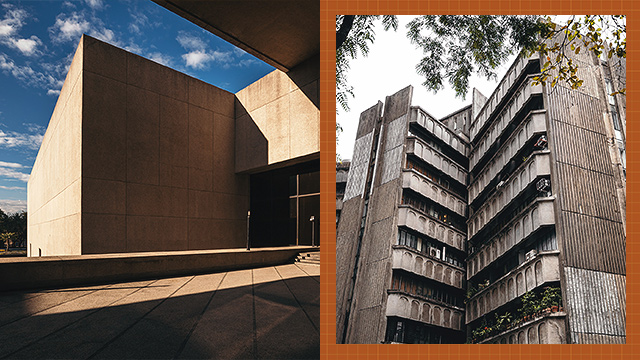 The Brutalist Architectural Gems to Check Out in Metro Manila

(SPOT.ph) Brutalist architecture may have had its heyday during the mid-20th century, but that doesn’t mean this striking architectural movement has lost its luster. Characterized by its heavy-handed use of concrete, imposing facades, and cold, gray palettes, brutalism arose in the 1950s, emphasizing an aesthetic use of basic building processes; hence, the dominance of cast-in-place concrete. It’s also touted as the movement that has no apparent concern for visual amenity, according to A Visual Dictionary of Architecture by Francis DK Ching.

If you’re unfamiliar with brutalism, all you have to do is turn to #bruatlistarchitecture Tiktok for an insta-education. Film enthusiasts will also spot some famous brutalist buildings in movies like Stranger Than Fiction, The Big Lebowski, and A Clockwork Orange.

Also read: This Cool IG Page Features Unique Buildings From All Over the Philippines

Brutalism may very well be the Marmite of architectural styles as it is incredibly arresting as well as visually oppressive (brutalist buildings are always a go-to for dystopian, Cold War, bunker scene-setting in films!). However, its long-lasting impact in architecture goes beyond its divisiveness. The movement also lends itself to a more romantic take on what buildings are and what they can be: concrete poetry.

Metro Manila is no stranger to brutalist architecture. Even with the rise of skyscrapers, shopping malls, and 21st-century structures, landmark brutalist buildings still remain scattered around the city.

Want to check out these amazing brutalist architecture right in the Metro? Here's an itinerary for you:

Start your tour in Makati in the morning. Drive down Ayala Avenue and make a pit stop in Legazpi Village for a cup of coffee among the many office buildings in the area.

The first crop of brutalist structures may have likely come up during the early 1960s, just as the Makati central business district started taking shape. During the post-war period, the Ayalas were busy transforming the landscape and creating infrastructure we’re familiar with to this day. Ayala Avenue reached completion in 1958 and became the main thoroughfare along which some of the first brutalist buildings in the city were built.

On the intersection of Ayala and Makati Avenue is one of the city’s first five-star hotels, the Peninsula Manila. Designed by Gabriel Formoso, the hotel was built in 1976 to coincide with the hosting of an International Monetary Fund conference. The Pen has undergone many renovations and upgrades over the years, but what remains constant is its two main wings, which take on signature brutalist undertones. These concrete blocks, similar to the Makati Stock Exchange, are broken up by both horizontal and vertical structural elements, which allow the hotel rooms to be set back and protected from harsh sun as well as strong winds. The brutalist quality of these two wings serve as a visual contrast to the hotel’s notably anti-brutalist main lobby, landscaping, and fountain.

As you make your way down Ayala Avenue and into Legazpi Village, you’ll see several structures taking on a distinctly brutalist aesthetic. Makati’s central business district may have started taking shape in the '70s and '80s, but the mid-century brutalist influence still remaines strong in many of its older buildings. One of these is Legaspi Tower 100, along Legazpi Street. This residential building, designed by Antonio Mercado is known for its sharp, acute angles, and its façade’s strong vertical linework.

After you’ve been energized by your cup of coffee in Makati, head to the EDSA-Ortigas area for a quick drive and maybe some fast-food takeout for lunch.

In the Ortigas area, approaching Shaw Boulevard and Sheridan Street, you’ll find the Development Academy of the Philippines. While this building may not possess the heavy grays and slab aesthetic of the Makati buildings, it does possess a predominantly concrete façade, wings in the building that jut out in extreme angles, as well as a smart use of tropical design to encourage sun shading and air flow.

From the Pasig area, drive out to EDSA northbound and towards Santolan and Camp Crame. Make a U-turn to get yourself on EDSA southbound and brace yourself for a little brutalist gem in KFC Greenhills. Located in the Pacific Machines Building, this unlikely fast-food spot finds its home in a former office building along Metro Manila’s busiest thoroughfare. The building is distinct because of alternating blocks that jut in commanding, diagonal patterns.

After having some fried chicken for lunch, make another U-turn along EDSA Ortigas to return to EDSA northbound for a tour of Quezon City’s university campuses.

Head to Katipunan Avenue via White Plains and make a pit stop at Ateneo de Manila University. Built in 1985, Padre Faura Science Hall demonstrates how brutalism can evolve and shapeshift to fit different environments, contexts, and purposes. The structure’s utilization of brick along with concrete softens its façade and lends a lighter tone to the buildings that were designed in the 1960s and 1970s. It houses Ateneo’s Physics department.

Exit Ateneo and visit University of the Philippines - Diliman to take a look at the UP Theater or Villamor Hall. This building precedes the mid-century period and was originally built in 1945 by architect Roberto Novenario. Its modernization in the 1980s however, is most likely responsible for its fresher, more brutalist façade. With a massive cantilevered canopy and imposing brick features along its front elevation, it provides a striking concrete contrast to the verdant greens and dramatic trees of the UP campus.

From Quezon City, traverse Quezon Avenue and head to Manila proper in time for sunset. Metro Manila’s most famous brutalist buildings are scattered all over Pasay and Manila and may provide beautiful vistas during the late afternoon and early evening.

Malate is often known noted for its “Old Manila” appeal, but one of its most famous buildings, the Ramon Magsaysay Center, is notably modern, with its brutalist leanings. Built in 1967 by Alfredo Luz, the Ramon Magsaysay Center or RMC is a pioneer—the first structure in the country to use a column-free structural concept through the use of pre-cast and pre-stressed beams. This building’s impressive entrance is grand in scale—a feature matched by its equally impressive travertine cladding. The building is also built to withstand the salty air of this part of the city.

From Malate, head to Pasay to see the Marcos-era buildings that made brutalism a permanent fixture in Metro Manila’s landscape.

First, stop over at the Philippine International Convention Center, designed again by National Artist Leandro Locsin. Built in 1976 to host the World Bank’s International Monetary Fund Annual Meeting, the Philippine International Convention Center (PICC) is known for its long horizontal span and the lyrical way one space connects to the other as you move from entrance to walkway to wing. Locsin blends low ceilings with wide expanses to create an almost melodical experience of space and architecture.

For your second stop, drive to the infamous Manila Film Center to get a glimpse at the building that spurred many ghost stories, myths, and theories. Inspired by the Parthenon, the building designed by Froilan Hong was built in 1981 to house the Manila International Film Festival. The construction undertaken was too ambitious for the short period of time that was allotted, and it is said that the building’s eventual collapse led to many deaths, literally covered up by concrete.

Luckily, the city’s brutalist piece de resistsance does not have a sordid history to it. For your final stop, head to the Cultural Center of the Philippines. Designed by Leandro Locsin, the Cultural Center of the Philippines (CCP) was constructed in 1966 as a way to showcase arts and culture in the Philippines. The CCP is elegant, simple, and still incredibly arresting. For all the heaviness that is associated with brutalism, Locsin managed to infuse his structure with a sense of levity. The CCP’s main slab seems to lilt and float above ground, and its sweeping driveway only made even more dramatic by the fountain that sits in front of it. A walk inside the CCP’s halls and theaters only further emphasizes other hallmarks of the brutalist movement: low ceilings open up to grand expanses, unexpected and interesting angles, and a functional yet lyrical connection between spaces.

It only makes sense to end your architectural tour of the city not just with Manila’s signature sunset, but with this National Artist’s most impressive and most famous work.

Con-00263 Design And Heritage Guide Manila Heading Out Brutalist Architecture Design City Life Makati San Juan Pasay Pasig Quezon City Ateneo De Manila University University Of The Philippines
Your Guide to Thriving in This Strange New World
Staying
In? What to watch, what to eat, and where to shop from home
OR
Heading
Out? What you need to know to stay safe when heading out