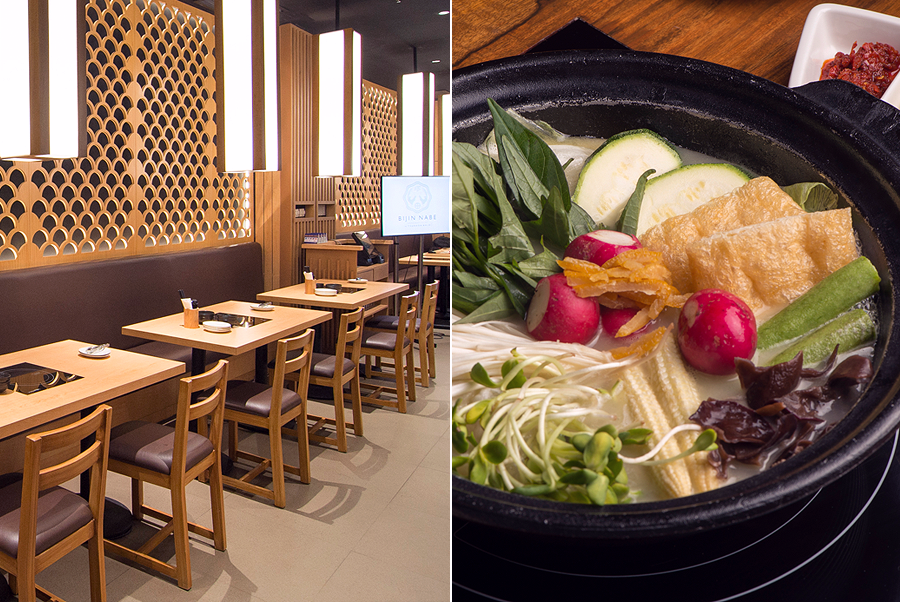 Perfect for the cool weather.

(SPOT.ph) There’s nothing more comforting than a hot bowl of soup on a chilly day. Hot pot—a centuries-old Chinese cooking method where various types of protein and vegetables are cooked in a simmering broth in front of you—can give you this satisfaction and more. Not only does it warm up your belly, but it’s lip-smacking and nutritious, too. Take advantage of the last few days of this cold season and head over to these great hot-pot places around the Metro.

Besides their regular shabu-shabu sets, Shaburi is known for their unlimited Wagyu, which you can cook in their signature umami broth. It’s best to come hungry so you can maximize your 90-minute time limit. Their Regular Shabu (P549/weekday lunch; P649/dinner, weekends, holidays) comes with tender slices of beef and pork and a slew of fresh veggies that you can mix and match. Or you can also splurge on the Shaburi Wagyu (P1,249/weekday lunch; P1,349/dinner, weekends, holidays), with Wagyu beef and other proteins like pork and chicken.

You might notice the principle of yin and yang at this modern Japanese shabu-shabu restaurant—from the two kinds of broth (traditional seaweed and spicy miso) served in a half-and-half pot, to the two kinds of dipping sauces (sesame and ponzu) available on each table. Apart from their best-selling Beef and Vegetables Set (P795/good for two), which includes unlimited rice and USDA Angus beef, the Seafood Set (P428/single; P888/good for two) is another worthy option. With a light and fresh broth that’ll excite the taste buds, it combines seafood like shrimp, squid, lobster balls, kani crab sticks, squid cakes, and scallops into one delicate hot pot.

From the same group that brought Vikings and NIU to life comes Tong Yang, a Chinese shabu-shabu restaurant that mixes both hot pot with table-top grill cooking. Whichever branch you go to in the Metro (they have seven and counting), you’ll be able to satisfy your hankering for both soup and grilled meats. Their signature Shabu-Shabu & Grill (P595/Monday to Friday lunch, P695/weekend dinner) lets you enjoy a full meal with your choice of broth, veggies, and protein for grilling.

You can’t go wrong with a classic Chinese hot pot and that’s what Healthy Shabu-Shabu is all about. You might feel overwhelmed by their assorted selection of shabu-shabu sets, which range from seafood and Wagyu beef, to pork loin and lamb. Pro tip: Bring your friends because their sets are good for over four people! For something unique, try the rich and comforting Lamb Set (P3,250/Set A), which combines lamb with a variety of seafood such as shrimp, fish fillet, squid, oyster, and mussels.

Did you know that “ichiban” means number-one? Shabu Shabu Ichiban is one of the top hot-pot restaurants in Nagoya for good reason. Despite their extensive selection of soups, their eye-catching menu is easy to navigate—choose from over 24 soup bases; from spicy miso butter, kimchi, and curry, to tonkotsu soy and konbu! Get your fix of succulent Angus beef and king crab legs, all swimming in a deep and spicy broth, with Set C (P1,788/weekday lunch, P1,888/weekday dinner, P1,988/weekends and holidays)

Gloria Maris may be popular for their dim sum and roast duck, but the Chinese restaurant’s OG branch in Greenhills also serves hot pot. Gloria Maris’ hot pots are completely customizable starting from the soup base down to the protein. A no-fail combination of base and protein is their Szechuan Style Soup in Pot (P300) with Fresh Prawns (P400), Marinated Beef (P260), and Salmon Shrimp Balls (P350); the broth’s fiery kick lends an interesting contrast to the deep beef and seafood flavors.

Wow Cow Fresh Beef HotPot lets you feast on all-you-can-eat beef. You’re sure their cuts are as fresh as they can get since the restaurant only sources their meat from local butchers. Although the shabu-shabu place leans more on the pricier side, their hot pots are worth it—don’t leave without ordering their Basic Set (P4,800), which is good for over two people. Their signature broth with 11 kinds of hand-sliced beef is umami-rich, mixing spicy, sweet, and savory all in one pot. The best part? Their side dishes and dipping sauces are refillable!

Apart from their crowd-favorite rice toppings and teppanyaki, Thousand Cranes Shabu Shabu has hot pots that are just as memorable. Unlike other shabu-shabu places, this restaurant offers hot pots that are good for one—perfect for times you feel like dining solo. Indulge in their Tenderloin Set (P560/good for one, P1,650/good for four), with fork-tender beef as the star of the show. Each set includes the restaurant’s homemade spicy-savory broth as well as fresh vegetables and seafood.

Panda Shabu Shabu is probably the most affordable shabu-shabu spot in the Metro, with branches usually located at mall food courts. In case you’re craving and need a quick fix, look no further than this no-frills stall. The Seafood & Beef Shabu-Shabu (P238) is a good option, with a savory broth and assorted toppings that are perfectly complemented with plain white rice. You can also choose which soup base you want, including laksa, chicken, sate, or malatang.

Bijin Nabe by Tsukada Nojo is famous in Japan and Singapore for their signature “beauty collagen” broth. Yes, there’s collagen from the Golden Jidori Chicken in the soup, which, as they claim, provides a lot of health and beauty benefits. The chicken is boiled for over eight hours to produce a jelly-like substance that melts in the broth for an extra savory flavor. It’s best to share a pot of Bijin Nabe (P795) with a friend because their portions are generous and come with chicken chunks, prawns, fresh greens, mushrooms, tofu, and more.