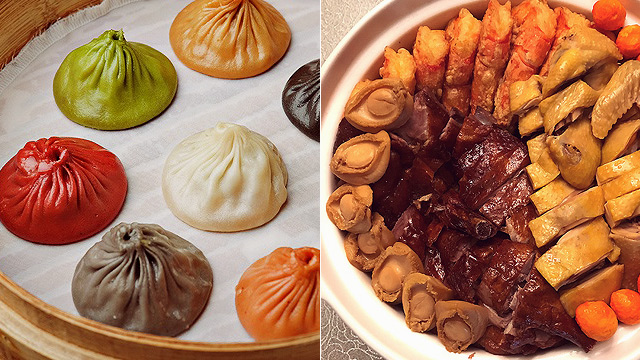 10 Great Chinese Restaurants for Your Next Lauriat

For Chinese New Year and beyond.

(SPOT.ph) Anytime you’re looking to feed a large group—whether it’s for birthday parties, graduation celebrations, your BFF’s despedida—or heck, if you’re just hankering for the cuisine’s signature umami flavors, Chinese food is always a great option. Feasting the Chinese way is also known as holding a lauriat—a word from the Fookien lao diat which means “special occasion,” and refers to a lavish sit-down banquet involving eight to 10 dishes. Round tables are often used, and the meal may go on for up to three hours—making it a great foil for catching up with friends and family. Here, we’ve rounded up 10 great Chinese restaurants, excluding those you’d find in hotels, that you’ll want to consider for your next grand feast.

Here are 10 Chinese restaurants for your next lauriat:

If you’re looking to enjoy Peking Duck for your celebrations, look no further; this 24-year-old restaurant makes some of the best in the Metro (P3,200) that’s crisp on the outside and flavorful even sans sauce. It’s worth getting it the second way (additional P500), which gives you a choice between Minced Duck with Fresh Lettuce, Duck Bones Fried with Salt and Pepper, and Duck Soup with Vegetable and Bean Curd; and even the third way (additional P500), which gives you a choice between an additional Duck Soup or Peppercorn Duck. Amidst their other Northern Chinese specialties, another must-try on their menu is the Beggar’s Chicken (P1,500), a whole chicken stuffed with aromatics and wrapped in lotus leaves that keeps the flavor locked in as it cooks slowly. Though the said dish has to be ordered in advance, trust us when we say it’s worth the extra effort.

This relative newcomer may just be your next go-to Chinese spot, exuding elegance from its interiors to its extensive menu. With Hong Kong Chef Lam Pui Hung at the helm of the kitchen, The Empress Dining Palace prepares Cantonese specialties like the Empress Treasure Pot (P5800/medium, P9,800/large) with premium ingredients like abalone, duck, and prawn; and the sweet-salty “Cha Sao” Honey Pork (P480/small, P720/medium, P960/large). Their main dining hall can fit up to 108 guests, the VIP rooms up to 48, and the conference rooms up to 18.

Hai Shin Lou serves mainly Cantonese fare by Chef Tommy Yao—and boy, do they do it well, from their dim sum to their roasts to their other pork, beef, and chicken dishes (for which, surprise surprise, they use zero MSG!). But this well-loved establishment is especially known for its fresh seafood, which they get from aquariums filled with live fish within the restaurant. Feast on hard-to-find seafood such as Red Spotted Crab, King Crab, Sea Mantis, Geoduck Clams, and more (all seasonal price), cooked to your liking.

From the owners of Lugang Cafe comes Xiu, where Cantonese cuisine reigns supreme and you can have excellent versions of Chinese classics like Hot Prawn Salad (P880/small, P1,760/large), Assorted Dried Seafood in Clay Pot (P1,680/small, P3,360/large), and more. Their roasts are especially worthy of attention; try their Honey Glazed Prime Cut Char Siu (P680/portion), which is redolent with sweet-savory flavor and cooked to the proper succulence.

This upscale outpost of the more casual Gloria Maris is as classic of a celebration place as you can get; it’s been around since the '90s and continues to serve great Chinese fare to this day. Their Greenhills space is divided into three parts: the hotpot area, the main dining area, and the more casual dim sum area. At the helm of the kitchen are chefs from Hong Kong, and the menu is especially sizable—but if there’s anything you shouldn’t miss, it’s the Steamed Crab with Glutinous Rice (seasonal price), Lechon Kawali (P690/small, P1,380/medium, P2,070/large), and Steamed Lapu Lapu (P2,800/kg).

There’s something for everyone at Paradise Dynasty, as the Singapore-based restaurant serves up Chinese fare both in its classic state and with creative twists. In particular, they’re known for their Specialty Dynasty Xiao Long Bao (P388/eight pieces), which comes in an assortment of flavors: the Signature Original, Garlic, Ginseng, Foie Gras, Szechuan, Cheese, Crab Roe, and Black Truffle. They also dedicate a special section of their menu to Szechuan specialties, like Poached Beef in Szechuan Chili Oil (P788) and Spicy Szechuan Crispy Chicken (P298).

Of course we had to include an establishment from Binondo, and nothing fits the bill quite like UNO Seafood Wharf Palace. Having been open since 2008, the restaurant boasts having many long-term patrons who can vouch for their classic Chinese fare. As their name implies, fresh seafood is the star here, and they serve especially clean-tasting Steamed Prawns with Garlic Sauce (P150/piece) and Steamed Fish Fillet in Soy Sauce (P360). A surprise bestseller, however, is the Baked Uno Special Chicken Pie (P550), which has a creamy filling and a wonderfully tender crust.

Choi Garden has been a go-to spot for Cantonese food since 2007. and it’s known for its flavorful dishes that are consistently tasty and fresh from the congee to the seafood to the meat and vegetable dishes. Don’t miss out on their winning Lechon Macau (P730/small, P1,460/medium, P2,190/large) and Steamed Lapu-Lapu (P2,490/kilo), both of which come with succulent, flavorful meat.

Hailing from Singapore, Tao Yuan specializes in both Cantonese and Singaporean eats. While they’re more known for the latter—their take on Singaporean Boneless Hainanese Chicken (P480/small, P880/medium, P1,680/large) is one of the best you’ll find in Manila—the Cantonese side is more than well-represented, too. You can expect well-executed takes on classics like Roast Peking Duck (P1,680/half, P3,280/whole) and Pork Belly with Taopok (P580/small, P930/medium, P1,280/large).

Don’t let its humble interiors (and “express” in the name) fool you; Tung Lo Wan is the place to be for no-frills Cantonese eats. Situated on Wilson Square, it serves seafood that’s cooked fresh from its live state, meats, noodles, hot pot dishes, and more. There are two dishes in particular that you can’t miss: crisp-on-the-outside, juicy-on-the-inside Roast Pork, a.k.a. Lechon Macao (P420) that they serve with mustard as is done in Hong Kong; and the succulent and juicy White Chicken (P200/quarter, P400/half, P800/whole).