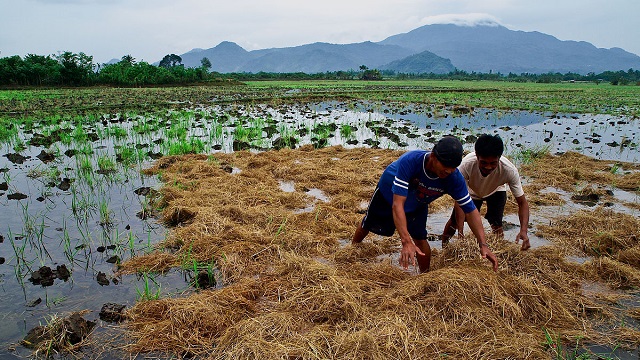 A Look at How Filipino Farmers Are Affected By the Quarantine

It's yet another reason why fruits and vegetables are important.

(SPOT.ph) Being a farmer poses a lot of challenges, no matter what time of year. You spend most of the day watering plants, tending to crops, tilling the land, ensuring irrigation, harvesting, and selling your harvest to middlemen. It entails a lot of physical labor, with very little pay.

But the COVID-19 pandemic adds to those challenges—not because this has affected the weather or other natural conditions directly connected to the produce, but because of the many shortcomings of the enhanced community quarantine that was implemented on March 16.

To understand exactly what farmers around the country have been going through, we talked to Donna Miranda and Angelo Suarez of Sama-samang Artista para sa Kilusang Agraryo, an organization of art and cultural workers aiming to advance genuine agrarian reform, rural development, and food security. Sama-samang Artista para sa Kilusang Agraryo (SAKA) is also part of network of organizations under the Kilusang Magbubukid ng Pilipinas, a movement that pushes for genuine agrarian reform and national industrialization “as the foundation for overall economic development.”

How Has the Quarantine Changed the Way They Bring Their Produce to the Cities?

As a farmer, your farmland may be located somewhere away from your home—thus entailing travel. “For some of them, ‘yong sakahan nila, hindi sa bakuran lang—it’s in another town,” says Suarez. You also need to travel to be able to sell your harvest to the market.

But this has been greatly hampered by the presence of checkpoints that block them from passing through various local government units, sans special documents proving that they're farmers—even if they're carrying all of their produce in plain view. Although the Department of Agriculture has stated that farmers and food producers should be allowed and the transport should remain unhampered, in reality, implementation has not gone so smoothly. It is difficult for small farmers and food producers to procure the said documents as the requirements to do so are cost- and time-consuming. In the case of farmers from Norzagaray, the presence of an existing land dispute has added to the challenges. A private real estate company has allegedly ordered them to vacate the land they have been tilling for generations—to make way for a subdivision.

In line with the quarantine, authorities have issued special passes for carrying out errands or other essential activities. But with only one pass provided per household, these have not been enough to cover their needs, as many households and families have more than one member who works in the farmlands. “Sa isang household ng magsasaka, lahat 'yan nasa production,” Miranda explains.

Meanwhile, sugar workers who drive trucks to haul sugarcane in Batangas are only allowed to pass through checkpoints while still carrying their produce—but not allowed to return once they have unloaded. As a result, the workers resort to walking back all the way.

The lack of public transport has also limited the ways through which farmers are able to ship their goods. In the case of rice farmers, a report has shown this has led to a drop in the prices of palay to as low as P14 per kilo, as traders cannot procure palay from them.

Less demand has likewise caused the prices of produce to go down. This is partly due to the cancellation of festivals and other events—particularly in Benguet, according to a report by the Philippine News Agency. In Davao, the decrease in demand has partly been caused by restaurant closures.

If farmers cannot make it to their fields, they cannot plant nor harvest. In the case of the Batangas sugar workers, their inability to visit their sugar mills has gotten in the way of the production of sugar. Doing so depends on manual labor, such as manual planting, harvesting, and hauling, that cannot simply be done from home. Sugarcane is a crucial element not only in the production of sugar, but also bioethanol—the principal fuel used for road transport vehicles.


What the Farmers Need Now

Aside from calling on the government to reassess the checkpoint situation, as well as provide cash assistance and subsidies to help the farmers and their families, Suarez and Miranda also emphasize the importance of free mass testing. If we can identify who exactly to isolate, not everybody needs to be in quarantine—allowing more farmers to continue on their work and make a living.

Agriculture plays a crucial role in the Philippines’ economy—and yet farmers are largely neglected. Apart from the low wages, the Philippines remains a feudal nation where most farmers do not own the land that they till—and thus remain tenants who often have to give part of their harvest to the landowners. Those who assert their rights are ignored at best, or killed at worst, with SAKA citing 249 farmers’ lives having been lost since 2016.

Ultimately, farmers are our frontliners when it comes to our food and what affects them affects the rest of the nation. But beyond that, they're also people who want to be able to work and provide for their families—while also providing for everyone else's.

Main image from IRRI images/Wikimedia; used for illustrative purposes only.

Farmers Covid-19 Enhanced Community Quarantine Adventurer Savvy Seasoned Agriculture Longform
Your Guide to Thriving in This Strange New World
Staying
In? What to watch, what to eat, and where to shop from home
OR
Heading
Out? What you need to know to stay safe when heading out