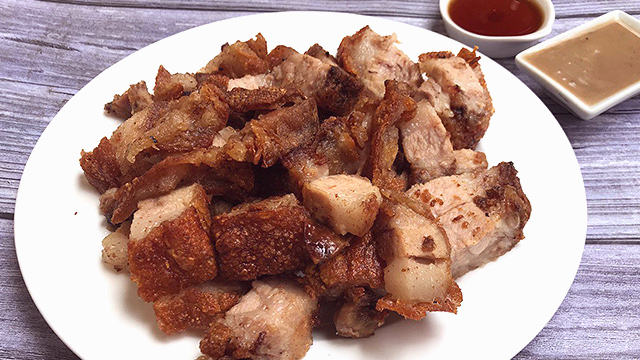 Secret's Out: Baliwag's Bagnet Is the Best Bagnet You've Never Had

What's with all the buzz? We tried it for ourselves and here's what we think.

(SPOT.ph) When you're looking for great Filipino-style roasts, one of the first places that likely comes to mind is the ubiquitous Baliwag, founded in 1985. They're best known for their lechon manok (which landed the fourth spot on our 2018 Top 10 Roast Chicken in Manila list!), but they've got other gems on their menu too—one of the newer ones being their bagnet. Baliwag first posted about it on Facebook in Feburary, but it's been on our radar a lot in the past couple of weeks, so we decided to investigate. What's the deal with Baliwag's bagnet, we wondered, and is it worth the reputation it's starting to get? Should you put it on your must-try list after Andok's lechon baka?

Also read:
Why Is Everyone Talking About the Litson Baka From Andok's?

Here's what we think of Baliwag's Bagnet.

But First, What Is Bagnet?

A fave among Filipinos, bagnet essentially refers to an Ilocano dish of deep-fried pork belly. If that description sounds familiar, that's because it bears a similarity to fellow Filipino pork dish lechon kawali—but you could think of bagnet its crunchier, bolder cousin.

Most recipes for bagnet call for boiling pork belly in a seasoned liquid (common flavorings include salt, garlic, black pepper, bay leaves, and so on), then drying the pork and deep-frying it twice (as opposed to just once in lechon kawali). As a result, the skin crisps up enough that it becomes a lot like chicharon, except this chicharon just happens to envelop succulent layers of pork that are golden-brown to perfection and packed with flavor.

Ilocanos often pair it with ingredients like chopped tomatoes and onions, Ilocos bagoong (Ilocano fish sauce), and/or sukang Ilocos (Ilocano vinegar, made from sugarcane)—which contribute piquant, zesty, and umami profiles to counter the meat's richness. And of course, having freshly steamed white rice (and/or a bottle of your favorite beer!) on the side is always a plus.

How Does Baliwag's Version Fare?

One bite in and we understood why it's got a growing fanbase. The skin was wonderfully crisp and toasty, its chicharon-like quality lightening the resulting bite so it's crackly rather than tough. Beyond the satisfyingly sinful crunch, the layers of lean meat and fat are also seasoned just right; there's a good saltiness to it, but not so much that it takes away from the taste of the pork.

While some versions of bagnet can have meat that's on the tough end of the spectrum (due to the long frying time), that wasn't the case with Baliwag's version. Instead, the meat here is tender and succulent, so every bite is an indulgent and savory symphony. And while fattiness is to be expected in any bagnet—heck, that's pretty much part and parcel of its appeal—Baliwag's version features generous chunks that have a good ratio of fat and lean parts, so you still get a balanced bite overall.

Baliwag's Bagnet goes for P385 if you're buying from their kiosks. Alternatively, you can get it delivered via GrabFood and Foodpanda, where it's priced at P481.25. It arrives pre-chopped in a simple paper bag that's then stuffed into a plastic bag—nothing fancy, but hey, it does the job.

We'll admit our initial impression wasn't the most positive one, because there was a lot of oil in the package—the paper bag it arrived in was pretty much soaked in oil, and it was a messy affair trying to transfer it to a plate. That aside, the aroma was intoxicating, as it filled the air with the telltale meaty fragrance of fried pork. As the branch we ordered from was just around a kilometer away, it was still warm—and it was a challenge to keep ourselves from snacking on pieces while snapping photos.

The bagnet stands really well on its own, but having it with sawsawan is an integral part of the experience. Baliwag includes two sauces (packed in sachets) with your order: a lechon sauce (seemingly the same one they serve with their roast chicken), as well as a sort of spiced vinegar.

The lechon sauce is a departure from tradition, but it's worth a try. The resulting taste you get with the bagnet is loosely comparable to paksiw na lechon—think slightly-sweet and tangy, a hint of earthy gaminess from liver, with a peppery raspiness.

We can't identify exactly what kind of vinegar Baliwag uses, but it has a clear and vivid acidity rounded out with a dusky note—and for some reason, we could almost taste their roasted chicken in there. It's not quite identical to real-deal sukang Ilocos, which has a distinctive fermented note to it; but pairs well with the pork, cutting through the fattiness and introducing brightness to every forkful.

Baliwag's Bagnet is a great version of the classic Ilocano pork dish. It's crisp and crackly outside, juicy inside, and flavorful even on its own. They veer a tad from tradition in their sauce game, but their twists work—and we think we know who we'll be hitting up the next time the pork-belly hankering hits.

Baliwag Bagnet Roadtest Food Delivery Adventurer Savvy Tpc-000001 Cvd Services Directory New Normal Foodie
Your Guide to Thriving in This Strange New World
Staying
In? What to watch, what to eat, and where to shop from home
OR
Heading
Out? What you need to know to stay safe when heading out