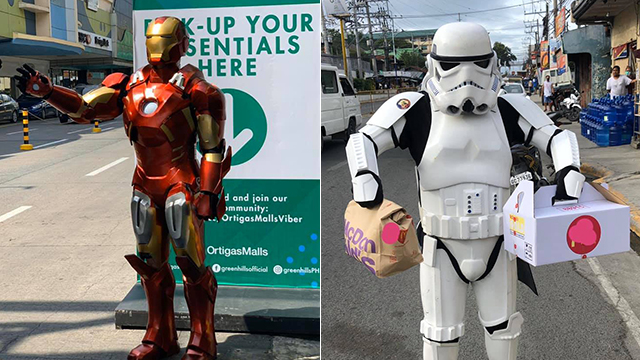 (SPOT.ph) We recently spotted a hungry (and adorable!) shark walking around Landmark Trinoma. Don't worry, it was a harmless prank done by a few civilians, but funny enough, also an interesting way to don protective equipment amid this pandemic. While we can't assure that such garb would be an effective form of protection from the coronavirus, we do commend the people who attempt to make others smile with their creative costumes, especially in these trying times. In fact, we're happy to report that quite a few people around country have had the same idea. If you were lucky enough to see a few of them in real life, we hope they brightened up your day. Below, we round up some of the popular film characters we've seen roaming the streets during the quarantine.

These people dressed as popular film characters were spotted around the Philippines amid the COVID-19 pandemic:

Yup, Tony Stark himself was spotted at Greenhills—er, we're just going to pretend for a moment that the last few scenes in Avengers: Endgame (cue tears) were nothing but a bad dream. Iron Man was over there helping the mall distribute its Click and Collect orders—a service that allows citizens to order their essentials online and have them picked up by a courier to facilitate social distancing. Thanks for your public service, Mr. Stark!

Nope, these stormtroppers weren't in Cebu to fight for the Galactic Empire, they were just visiting some frontliners and handing out food and supplies. The Force sure does look strong in those snacks!

Like many other Grab riders, Marvin Hermano has been helping citizens throughout Metro Manila get their essentials delivered to their homes and it looks like he decided to spice up his work days by rocking some cool costumes. He was spotted buying supplies in Muñoz Public Market in Quezon City in April dressed as Wade Wilson a.k.a. Marvel's unconvential hero Deadpool. He took to Facebook to post some of the other super hero costumes he's worn, which include Spider-Man, Black Panther, and more.

Who says you need to be a superhero to do acts of public service during the pandemic? Hermano also wore a costume inspired by the 2018 horror film The Nun while on duty as a Grab courier. We just hope he didn't accidentally scare any bystanders while riding around.

Entertainment Savvy Adventurer Tpc-000001 Iron Man Spider-man Deadpool Star Wars Black Panther Marvel Marvel Cinematic Universe Costumes
Your Guide to Thriving in This Strange New World
Staying
In? What to watch, what to eat, and where to shop from home
OR
Heading
Out? What you need to know to stay safe when heading out