Harry Potter Star Harry Melling Is Also in The Queen's Gambit
Loading
Already a member? Log in
No account yet? Create Account
Spot.ph is your one-stop urban lifestyle guide to the best of Manila. 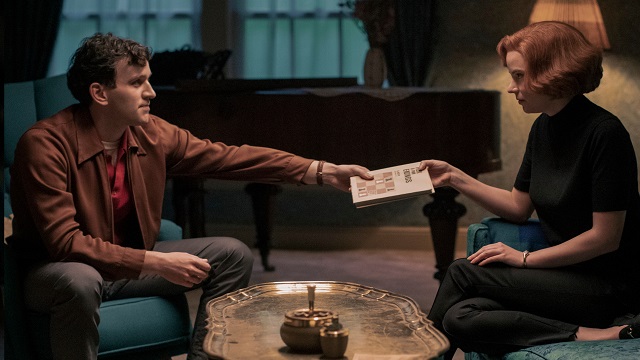 Does Harry Beltik look familiar to you?

(SPOT.ph) New Netflix gem The Queen's Gambit has practically everyone obsessed. All eyes are now on Anya Taylor-Joy, the actor who plays troubled chess genius Beth Harmon—but another face is also making waves online. The character of Harry Beltik, the first chess master Beth trumps at a tournament in Kentucky, had us all scratching our heads, trying to figure out where we've seen him before. Well, let us save your brain cells. Harry Beltik looks ridiculously familiar because he is played by the same guy behind Dudley Dursley, Harry Potter's bully of a cousin. Yup, Harry Melling is all grown up.

Feel old yet? Melling is now 31 years old. He was around 12 when the first Harry Potter movie, Harry Potter and the Sorcerer's Stone, came out in 2001, a full 19 years ago (We're not even going to ask how old you were that year). Needless to say, the all grown-up Melling had audiences #shookt with his "transformation."

In The Queen's Gambit, he plays the proud but well-meaning Harry Beltik—complete with a flawless American acccent. We won't say much in case you haven't watched the mini-series, but he becomes one of Harmon's close friends.

Interestingly enough, you might have seen the actor a couple times before. Melling also played Steven Merrick, the evil head honcho of a pharmaceutical empire who wanted to experiment on the immortals in The Old Guard, and if you watched the gruesome thriller The Devil All the Time, then you definitely saw him as the creepy-but-charismatic preacher Roy Laferty. Both roles are far from his Dursley days—remember the nearly iconic line in The Sorcerer's Stone?

Melling himself is aware of just how different he looks now from his time as part of the massive Harry Potter series. "I think one of the blessings of that sort of stage in my life was the fact that I didn't get recognized," Melling told People, explaining that he was able to study in drama school without a Harry Potter haze surrounding him.

"I had this history of being part of the films, but also I felt like I had the opportunity to sort of cause a new start, which I think is useful," he added.