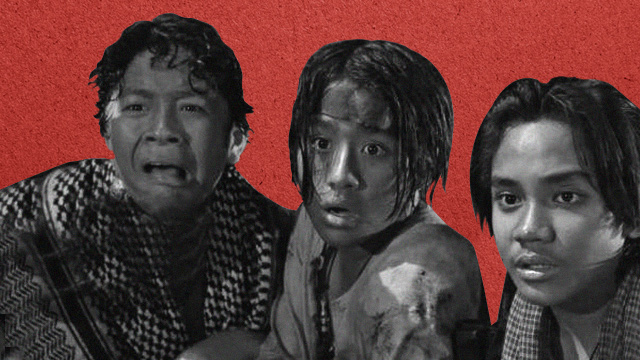 10 Pinoy Childhood Classics You Can Stream

No more fighting over the remote!

(SPOT.ph) While today’s seemingly countless TV series and movies will already have you binge-watching the weekend away, sometimes you just miss the comfort that childhood favorites bring you. You probably still have faint memories of running to your television set just to watch your fave TV show, or tuning in at a certain time to catch the scheduled screening of a movie. The good news is, there’s no need to fight over the remote anymore, because you can now stream your old faves with just a few clicks.

Here are 10 classic movies and teleseryes from your childhood that you can watch online:

Watch it on: iflix and YouTube
GMA has always been big on fantaseryes and you can’t forget about Mulawin, which soared with audiences (see what we did there?). It follows the story of the Mulawin, a bird species that went into hiding because of humanity's greediness. But when a rebel group of Mulawins called Ravenas seek revenge on humans, it’s up to Aguiluz (Richard Gutierrez) and Alwina (Angel Locsin) to stop an impending war.

Watch it on: HOOQ, iflix, and YouTube
Admit it: You had your favorite Sang’gre—whether it was Iza Calzado’s Amihan, Sunshine Dizon’s Pirena, Karylle’s Alena, or Diana Zubiri’s Danaya on Encantadia. No matter who your fave fairy was though, you still rooted for them when darkness loomed over the enchanted realm of Encantadia. You get plus points if you remember all the kingdoms, territories, and magical terms they used on the show. It was such a success, it spawned three seasons and a crossover movie with Mulawin.

Watch it on:  HOOQ
The First Day High TV commercial from Rexona (you know, the one with that catchy song) was such a big hit that it spawned this movie adaptation starring Gerald Anderson, Kim Chiu, Geoff Eigenmann, Jason Abalos, and Maja Salvador. In the film, the five play college freshmen—from their own respective cliques, of course—who become suspects in a mysterious accident in school.

Watch it on: iflix
Some of the biggest names of the early 2000s—Diether Ocampo, Patrick Garcia, Vhong Navarro, Onemig Bondoc, Dominic Ochoa, John Prats, Baron Geisler, and Jodi Sta. Maria—star in this ensemble coming-of-age movie. The characters’ stories range from a student stealing for tuition money, a young mom going abroad to work as an exotic dancer abroad, a drag queen, and couples who are going through their own relationship problems. Aside from the already-star-studded cast, you’ll also spot a number of cameos from stars like Kris Aquino, Piolo Pascual, Angelica Panganiban, Judy Ann Santos, Heart Evangelista, and more.

Watch it on: iWant
Oh what your younger self would’ve given to have Doraemon, the blue-robot cat as your pet-slash-best-friend. In the series that aired on GMA back in 1999, Doraemon’s 4D pocket could come up with anything his best friend Nobita needs, like a gravity-reversal belt or a bamboo-copter. It was announced in March that the beloved cartoon would be returning to TV—this time on ABS-CBN, and now you can stream episodes on iWant.

Watch it on: iWant
If you grew up in the '90s, chances are you were immersed in the mystical world of Magic Temple, which was directed by Peque Gallaga and Lore Reyes (who also served as writers with Erik Matti). The critically acclaimed film follows three boys who use special powers to fight evil in the land of Samadhi with the help of magical creatures. The film won all 14 of its nominations at the Metro Manila Film Festival in 1996, so hopes are high for the remake, helmed by Birdshot and Eerie director Mikhail Red.

Watch it on: iWant
It's very likely you were creeped out when you first watched this big-eyed alien onscreen, but like E.T., his heartwarming story and kindness eventually won you over. Soon enough, you were watching his adventures with  Bong (Carlo Aquino) and Anna (Ani Pearl Alonso-Aquino), who try to get him back to his home planet, Yekok. The 1997 film was restored for its 20th anniversary in 2017 and there was also a teleserye of the same name in 2007 starring Joshua Cadeliña and Julia Barretto.

Watch it on: iWant
Love teams might still dominate movie and TV screens today, but there’s nothing quite like the magic brought onscreen by the likes of John Lloyd Cruz and Kaye Abad, Baron Geisler and Jodi Sta. Maria, Paolo Contis and Desiree del Valle, and more. No matter who your fave reel-life couple was, you can still keep your hopes of them ending up together in real life when you rewatch all the old episodes online.

Watch it on: iWant
Fans of the cartoon, Cedie: Ang Munting Prinsipe in the '90s were treated to a live-action remake starring Tom Taus as the simple American boy who turns out to be a prince and sole heir. Fun fact: Cedie was also directed by Romy Suzara, who helmed Sarah… Ang Munting Prinsesa, the film adaptation of Princess Sarah.

Watch it on: Netflix, iWant
Your childhood wasn’t complete if you didn’t have a crush on at least one of the members of the F4 in this hit Taiwanese show. Whether you were on Team Dao Ming Si (Jerry Yan) or Hua Ze Lei (Vic Zhou) for Shan Cai (Barbie Hsu), you’ll have a field day reliving all the episodes of the OG series that spawned many remakes.