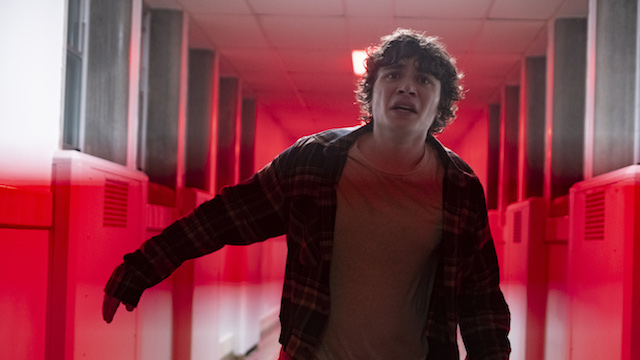 (SPOT.ph) If we can celebrate Christmas as early as September, then by the same logic, viewers can enjoy a Halloween-themed before the season of trick-or-treating rolls around. Scary Stories To Tell In The Dark revolves around a group of teens in a small town, who explore a haunted house one Halloween night, and unleash all sorts of terror upon the neighborhood.

The horror film is based on an early '80s children’s book series (it preceded the Goosebumps books by almost a decade) of the same name, containing short stories written by Alvin Schwartz. What sets these books apart from other literature in the same demographic are the spooky, unsettling inky illustrations by Stephen Gammell, which accompanied each tale. The books were known for being of a surprisingly violent nature and far more terrifying than any elementary-age reading material was expected to be during the time. This may explain why the movie has been given the R-13 treatment and presented to an older audience in order to prevent emotionally scarring this generation’s kids.

They’ve gathered quite the powerhouse squad for this undertaking. We couldn’t think of a better person to co-create the story for the big screen than the master of macabre himself, Guillermo del Toro, whose eclectic work includes Pan’s Labyrinth, The Shape of Water, Hellboy, and more. On the director’s seat is André Øvredal, best known for the found footage mockumentary Trollhunter, also has his share of experience working on fantasy elements. The Hageman brothers, Dan and Kevin, who are responsible for the crazy ride that was The LEGO Movie, co-wrote the screenplay.

Scary Stories To Tell In The Dark takes place in the groovy era of 1968 runs the entire gamut of the standard terror tactics of the horror genre. You’ve got the rag-tag bunch of misfits: the genre-savvy horror nerd Stella (Zoe Colletti), the straight-laced busybody Auggie (Gabriel Rush), the obvious comic relief Chuck (Austin Zajur), the popular girl Ruth (Natalie Ganzhorn), the mysterious brooding newcomer Ramon (Michael Garza), and of course, the bully Tommy (Austin Abrams). The adult figures in the film: Stella’s father Roy, played by Dean Norris from Breaking Bad in a surprisingly somber role, as the clueless one and Police Chief Turner (Gill Bellows) as the useless windbag of an officer.

In most horror films, the wisecracking guy is usually the instant fan favorite. Chuck seemed like he was trying too hard to impress the viewers during the earlier part of the film. Midway through the film, he tempered his acting and became more likable, growing on...like a rash. Abrams is commendable for portraying Tommy, the type of character that we wanted to punch in the first few seconds. Out of all the characters, the most sympathetic ones are Stella, her father, and Ramon. We usually see the humans in such films as monster fodder and low-key root against them if they’re unlikable to begin with. But Stella and Ramon are so darn relatable as human beings, that even if they mess up numerous times, you’ll continue cheering them on instead of hurling expletives at the screen.

They also make an effort to equate this period piece to modern-day situations such as the rampant racism toward Ramon, who’s of Mexican descent. This explains why the teens couldn’t just ask for help from the police force or any capable adult for fear of getting Ramon into trouble due to discrimination. The film also makes quips such as, “If it’s on the news, then it must be true,” a knowing nod to today’s fake news troubles. The era can also easily explain the free-range teens running about, breaking and entering into haunted houses.

The books came out decades before the influx of throwback-era spooky shows—you might even say that the original source material inspired some similar content in later years. However, you can’t help comparing the film adaptation to its cinematic contemporaries. The main group’s reliance on walkie-talkies, for instance, reminded us of Stranger Things. The haunted book reminded us of Harry Potter and the Chamber of Secrets.

That said, the movie is well aware that they’re banking on tried-and-tested tropes. They’ve played around with the storytelling elements swapping in-a-heartbeat jumpscares with an agonizingly slow march to inevitable doom. The movie is not afraid of taking its sweet time to startle its audience senseless. There are moments that seem to stretch out for an eternity, giving us a false sense of security before serving the screams.

Some of the humans are cool and all, but the highlight are the monsters. However, some of the campier-looking creatures made us laugh out loud at the ridiculousness of their composition. The dim lighting definitely served its purpose to increase the ominous atmosphere because otherwise, the CG monsters can look downright silly and almost comical. Aside from the visuals, Sarah Bellows’ (Kathleen Pollar) scratchy, almost guttural voice work best represents the overall feel of the film. The backstory, while nothing unique, made us sympathetic enough that we cared about seeing a positive outcome.

One of the interesting plot devices in the film is the use of the storybook where one could see the entire horrific fate of the victim being written out on the page. It’s a unique way of building up the anticipation of what’s to come while staying true to the source material. The monsters may be overtly unnerving but without spoiling anything, there were humans in the film that were far more horrific in their actions.

The film may have catapulted to cult status if they played up the humor and camp.  The plot, while predictable, remained cohesive and follows the saying, “if it ain’t broke, don’t fix it.” We were hoping for more '60s era songs but we're down for the 1966 song, “Season of the Witch,” which had a reprisal in the end with Lana del Rey's hauntingly beautiful rendition.

Scary Stories To Tell In The Dark is a cheesy but charming story that could be used as an introductory film to the viewer uninitiated with the horror genre. It’s the sort of horror reminiscent of times spent sharing creepy tales with our classmates during recess time. The scares may be coming a mile away but the real twist was ending up being emotionally attached to the humans involved—well, some of them.

Scary Stories to Tell in the Dark is now out in theaters. Photos courtesy of Pioneer Films.