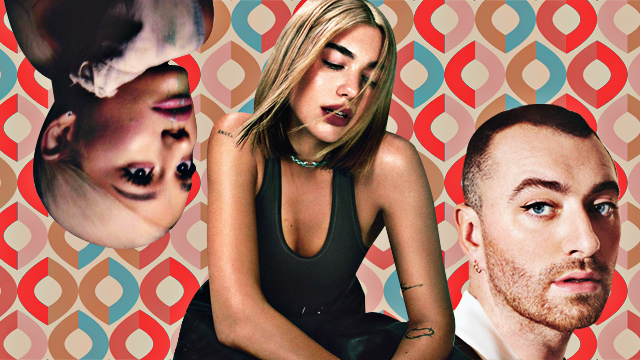 10 New Tunes to Help You Get Through the Christmas Rush

(SPOT.ph) It's the most wonderful time of the year, they say. But even the cheeriest of seasons can cause the chillest of people some serious stress. All the party-planning, gift-shopping, and family-entertaining can drive anyone mad. So when it all becomes unbearable, we recommend you stop and listen to our music recommendations this month. Dance to fresh ditties by Dua Lipa, Sam Smith, Ariana Grande with the Chaka Khan, HAIM, and Sigala with Ella Henderson. Locally, we suggest you kick back and relax with the latest offerings of Syd Hartha, Ben&Ben, Somedaydream, the vowels they orbit, and adobotofu.

Also read:
10 Underrated Jose Mari Chan Christmas Songs to Add to Your Holiday Playlist
Top 10 "Last Christmas" Covers to Save You From Tears

Here are fresh tracks to listen to while getting through the Christmas rush:

Artist: Dua Lipa
You could say Dua Lipa knows how to make empowering breakup anthems. Her latest "Don't Start Now," the first single off her forthcoming sophomore album, will remind you of her smash hit "New Rules." It's just as addictive and bouncy, although this one is heavily influenced by the disco era. Funky bass opens the track, and it doesn't take long until you are hooked and completely distracted from all the holiday rush.
Fun fact: For this song, Lipa worked with the same crew she collaborated with for "New Rules"—producer Ian Kirkpatrick and songwriters Emily Warren and Caroline Ailin.

Artist: syd hartha
Up-and-coming folk artist syd hartha has released her latest single, "paruparo." Here, she continues to showcase artistry and maturity that are well beyond her years. The mid-tempo song, with its relaxing guitar-led arrangement, is a "woke" number that tackles freedom of expression, and how the things we say can be easily misinterpreted in the highly politically correct culture we have today.
Fun fact: The fast-rising singer-songwriter released the song in time to celebrate her 18th birthday.

Artist: Sam Smith
Also teeming with disco vibes, Sam Smith's take on this 1977 Donna Summer classic will get you in a good mood. Take a break from all the Christmas shopping and planning, and just groove to this highly hypnotic club banger. Also considered a queer anthem, this is Smith's loving offering to the LGBTQ+ community. He tweeted, "As a queer person, 'I Feel Love’ has followed me to every dance floor in every queer space from the minute I started clubbing. This song to me is an anthem of our community and it was an honour and most importantly so much fun to have a go at it."
Fun fact: Disclosure’s Guy Lawrence produced the song.

Artist: Ben&Ben
If you have a hankering for something more soothing, opt for Ben&Ben's newest single, "Masyado Pang Maaga." The nine-piece folk-pop group surprised fans with the release of this lush composition. While it tackles heartbreak, the exquisite arrangement and emotive vocals can surely relieve your all your holiday-related stress.
Fun fact: "Masyado Pang Maaga" is a standalone single, not included in the band's recently released album, Limasawa Street.

Artists: Ariana Grande and Chaka Khan
It's the dream collab you never thought you needed. Pint-sized songstress Ariana Grande and soul diva Chaka Khan team up for this sassy number. "Nobody" is a jazzy and enjoyable upbeat pop track that would turn any bad day around. So when it all seems too much, go take a break, play this gem, and get back to your holiday preps like a pro.

Artist: HAIM
The Haim sisters are back with a dance floor-friendly, synth-laced sad banger. "Now I'm In It" tackles our fears and frustrations when we lose ourselves and go on a downward spiral. While it touches on darker topics, the track is still a hopeful composition that can inspire strength and resolve. If you're experiencing some holiday blues, perhaps this song can help you pull through.
Fun fact: Danielle shared an encouraging message on their band's Instagram account: "'Now I’m In It' is about going through it. A depression. Not-leaving-the-house type of shit. For my sisters and I, there have been times in our lives where we have felt like we are stuck in a dark hole... But every time I’ve been depressed, it takes me accepting that I need help to start to get out of it. It’s gotten a little easier as I have gotten older to recognize the symptoms and remind myself that when this happens, I need to seek help."

Artist: the vowels they orbit
Get in touch with your hopeless romantic side this holiday season. the vowels they orbit's second single, "Kiliti," is about finding the perfect person in an imperfect situation. Vocalist and guitarist Nikka Melchor delivers sweet vocals against a rather stripped-down, easy listening arrangement.
Fun fact: According to Darwin Hernandez, the band’s manager and Soupstar Entertainment founder, "The song was written by Nikka back in college a few years ago with just her guitar."

Artists: Sigala feat. Ella Henderson
In-demand DJ Sigala and singer-songwriter Ella Henderson work together for the very first time in this feel-good ditty. "We Got Love" follows the winning pop-EDM formula to deliver a danceable and entertaining single that ticks all the boxes. It's not the kind of music that will change the world, but it's a whole lot of fun, and sometimes, fun is enough.
Fun fact: Sigala is Bruce Fielder, an English DJ, record producer, and remixer from Norwich, Norfolk.

Artist: adobotofu
After a long day of holiday shopping and getting stuck in Ber-month traffic, it would sure feel good to arrive home and cuddle with your SO. No one to do that with and feeling a little forlorn? Never feel alone when you listen to adobotofu's dreamy (although sad) "Let Me." Sometimes, the cure is embracing and owning what you feel.
Fun fact: adobotofu is 20-year-old Michael Tran, a multi-instrumentalist and producer from Manila.