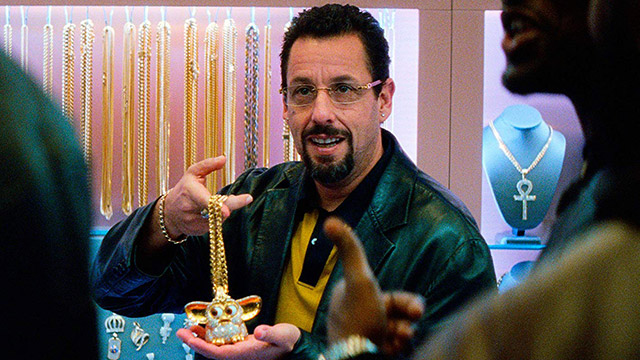 Here's When You Can Start Streaming Uncut Gems on Netflix

Ready to see jewels from a new perspective?

(SPOT.ph) Ah, New York—the concrete jungle where dreams are built, and a turn could lead you to Wall Street, to Broadway, or to the grittier alleyways and dark underbelly of the city that never sleeps. Despite how glamorous it looks, there's always something going on, and Uncut Gems takes you for a ride in the city's jewelry business. The film will be available to stream on Netflix starting January 31.

Set in rambunctious New York city, Uncut Gems takes place in 2012 and stars Adam Sandler as jeweller Howard Ratner, who has a big gambling problem, and as a result, is stuck in serious debt. In order to pay back all the money he owes, he resorts to shady dealings and bets. Aside from financial problems, he also has trouble brewing in his personal life as he stands to lose his wife Dinah (Idina Menzel), and finds warmth in employee-turned-mistress Julia (Julia Fox). He strikes gold when a rare opal enters his shop, and he's convinced the rock is instrumental to turning his life around. Aside from his struggles, Howard also has to deal with a roster of demanding high-profile clients.

The film is directed by brothers Josh and Benny Safdie and also stars Lakeith Stanfield, Mike Francesa, and Eric Bogosian. Former professional basketball player Kevin Garnett, as well as The Weeknd, John Amos, Ca$h Out, and Trinidad James play themselves.