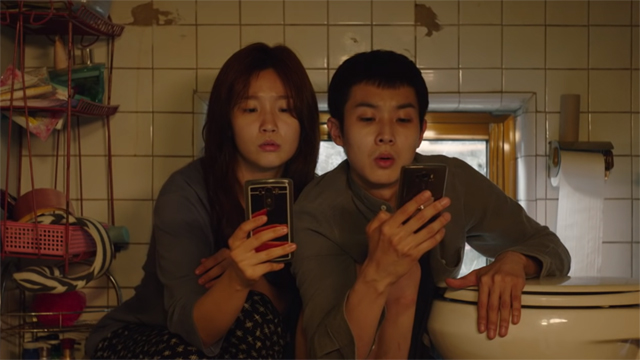 (SPOT.ph) South Korean film Parasite directed by Bong Joon Ho, one of the highest-grossing films released in 2019, has been making rounds in the awards circuit. Not only did it win the Palme d'Or at the 2019 Cannes Film Festival in May (the highest award from Cannes, by the way), it's also the first South Korean entry to be nominated for Best International Feature Film at the Academy Awards.

Several things make it a masterpiece—the tight script, the riveting story, the dynamic acting, truly, we could go on—but perhaps one of the most noteworthy aspects of Parasite is how Bong sets the scene in a particular location using specific production elements. For one, the house and the entire neighborhood, which are crucial elements of the film, were all built in a water tank, shares director Bong in a sit-down interview on Academy Conversations on the Oscars YouTube channel. Joining him in the chat are Park So Dam, who plays the cunning Kim Ki Jeong; and Song Kang Ho, who plays the patriarch Kim Ki-Taek.

One of the crucial scenes in the movie had the stars immersed in murky floodwater. You might think it's been mixed with actual mud or dirt, but Park cheekily tells the audience that they used something a little more beneficial for the actors: clay masks. Yes, the same ones recommended for facial exfoliation and removing pesky blackheads.

"Even if it looks really dirty, it was actually pretty clean water," a translator says after Park speaks. "And the contents, it also looks dirty, but it was actually the same product that goes into clays masks for your face packs that Koreans are known for, so it was actually a really nice skincare system for the cast," another translator adds, and Park nods with a smile.

We never would have guessed that the same clay masks you use in your skincare routine could make an important scene in a critically-acclaimed film look so realistic, but Bong and the team have their ways.