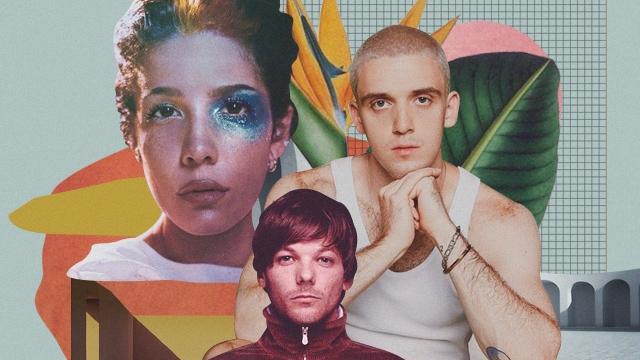 10 Fresh Anthems That Are All About Love

We're talking romantic, platonic, and everything in between.

(SPOT.ph) It’s the love month, but it doesn’t have to be all about romance. For our February playlist recommendations, we pick tracks that cover everything from affection for your S.O. to infatuation to self-love. Check out the latest from international acts such as Jonas Brothers, Lauv, Louis Tomlinson, James Blunt, and Halsey. Local artists like Leila Alcasid, Markus, and Nica del Rosario with Barbie Almalbis also share their take on love.

Here are new songs that tackle love and everything in between:

“What a Man Gotta Do”

It’s not the first time the Jonas Brothers feature their lady loves in their music video. In “What a Man Gotta Do,” Nick, Joe, and Kevin recreate iconic scenes from famous movies Risky Business, Grease, and Say Anything with their wives Priyanka Chopra, Sophie Turner, and Danielle Jonas. Their first single in 2020 is an upbeat homage to their partners and a declaration that the boys will do whatever it takes to keep their significant others for life.

Fun fact: The brothers also released an alternate music video showing them on a ride around Las Vegas.

Leila Alcasid’s “Better Weather” makes matters of the heart look so easy and uncomplicated. The relaxed track is an honest profession of blossoming love that just feels so right, like when someone effortlessly brings sunnier skies your way. The single is beyond chill, with Alcasid’s vocals that can put any listener at ease.

Fun fact: The track will be part of Alcasid’s forthcoming 16-track album with the same title.

We’ve all been there with our head in the clouds, absolutely infatuated, and out of touch with reality. In “Tattoos Together,” electropop singer-songwriter Lauv captures the carefree bliss of adoring someone new. Never mind that tattoos are permanent (not to mention painful) because at least we’ll have memories, is what he’s basically saying in this playful anthem filled with his signature hmmms.

Fun fact: Lauv is due to release his debut album titled How I’m Feeling in March.

Indayo is out with an exquisite folk-pop number about self-love. The group describes “Maskara” as a song about courage and being true to yourself, as well as a reminder that we’re always enough. Play this track during your gloomy days, and listen to the pleasant strings that will lift your spirits.

Louis Tomlinson has come a long way since his One Direction days. “Walls” is a stirring pop ballad that showcases the young talent’s songwriting prowess. It’s about the walls we build around ourselves and how we can break those down with love and gratefulness. He hints about regret for lost love in the song, but it’s an overall hopeful composition.

There’s no room for bitterness here, according to Markus. He’s out with the poignant electro ballad “Best Wishes.” The stripped-down single, highlighting the fresh-faced singer’s sleek and emotive vocals, talks about graciously letting go after a painful breakup.

English singer-songwriter James Blunt recently unveiled his touching tribute to his ailing father. Raw, emotional, and delicate, “Monsters” will remind each one of us to nurture our love for our parents. Fair warning: The music video will make you ugly-cry.

Fun fact: The song is off Blunt’s 2019 album titled Once Upon a Mind.

Solo artist gelo; (pronounced ‘gelo semicolon’ or ‘gelo with a semicolon’) describes “Ikaw Sa Salamin” primarily as a song for our happy crushes. But it’s also a reminder to accept our flaws. With uplifting lyrics, this saccharine track, complete with a dreamy folk-pop arrangement, will make you smile every time you look at yourself in the mirror.

Fun fact: In his Spotify bio, gelo; shares, “I also want to save people through my music. I try my best in doing so, which is why I added the semicolon (;) in my name. It means ‘keep going' in mental health advocacy.”

Halsey shows complete vulnerability in “Still Learning,” a song about the challenges of loving yourself. It also gives us a glimpse into the ugly side of fame and how she struggles with it. The trop-house beats are pretty addictive, but it’s really the message that stands out.

Fun fact: Ed Sheeran is credited as one of the co-writers for “Still Learning.”

Alternative and electronic elements come together in this radio-friendly collab by singer-songwriter Nica del Rosario and OPM veteran Barbie Almalbis. “Kamay” is a feel-good tune you can dedicate to just about anyone dear to you from your SO to your closest sibling to your best friend for life. It’s about weathering storms and conquering mountains with the people who matter to you the most.

Fun fact: As a songwriter and producer, del Rosario has worked with other artists such as Sarah Geronimo, Nadine Lustre, Christian Bautista, and Juris, among others. More notably, she is the songwriter behind Sarah G’s “Tala,” the 2016 track that recently went viral.