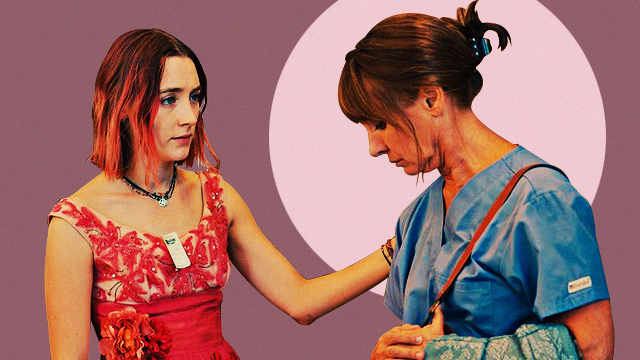 10 Things to Watch With Mom That Won't Leave You Cringing

For when you don't want to have to sit through an unexpected sex scene.

(SPOT.ph) While you may be stuck at home this Mother’s Day, you can still make the holiday special in its own way by hanging out with your mom on the couch for some quality time—and who says that can't mean watching a bunch of good movies or shows? Grab some snacks and fluffy pillows and get ready to bond over these series and movies depicting motherhood in all its complicated beauty. Some will make you laugh—and some will make you cry—but all are great to watch with your mom by your side.

Here are 10 films and shows that are perfect to watch on Mother’s Day:

This early aughts comedy-drama follows single mom Lorelai Gilmore (Lauren Graham) as she raises teenage daughter Rory (Alexis Bledel) while also juggling her career, friendships, love life, and her relationship with her parents. You’ll enjoy watching Lorelai and Rory’s tight-knit relationship filled with words of wisdom, quippy conversations, and lots of laughs. Oftentimes, you’ll have a hard time telling who’s mothering whom between the two protagonists. The show proves moms can be friends with their kids, that both parents and children can learn a thing or two from each other and that, like you, sometimes your 'rents have a little more growing up to do, too.

This 2016 comedy features an ensemble cast that includes Mila Kunis, Kristen Bell, Jada Pinkett-Smith, Kathryn Hahn, and Christina Applegate among others—pretty much an entire cast of cool real-life moms. The film follows all kinds of mothers: from solo parents to stay-at-home moms to those snooty ones you meet at school gatherings (we know you’ve encountered at least one). Each one is portrayed trying to balance their own personal ambitions with their family responsibilities while also still having some fun in between. The movie shows the struggles and pressures of being a mother in the modern age, and how it can leave one exhausted and overwhelmed. It also sheds some light on the double standard that exists in society between mothers and fathers. Overall, it shows moms being their most human. That is to say, always imperfect, but most often well-intentioned—each one a little different from the other, and each one great in their own way.

For those celebrating Mother’s Day with in-laws, this 2005 rom-com may make you laugh a little too loud. Jennifer Lopez stars as Charlie, newly engaged fiancée to Kevin (Michael Vartan). The couple seems happier than ever, but as their wedding approaches, one thing stands in their way at each turn: Kevin’s mother Viola, played by the legendary Jane Fonda. Tensions rise between Viola and Charlie, resulting in some hilarious antics as the two attempt to one-up each other behind Kevin’s back. Ultimately the two share the same goal: to make Kevin happy—but how they come to that conclusion is the real story.

This 2000s Pinoy classic stars Ai-Ai delas Alas as single mother Ina who, after the death of her third husband, must take care of 12 children on her own. She struggles to make ends meet while also being a homemaker, meanwhile hiding her struggles from her children. It’s a combination of hilarious trials from the protagonist mixed with the genuine worries and hardships most mothers go through. Notable names like Marvin Agustin, Carlo Aquino, Heart Evangelista, and Shaina Magdayao, among others make up Ina’s 12 kids.

Where to stream: Studio B

This 2001 Pinoy drama film directed by Eddie Garcia tells the story of Estella (Lorna Tolentino), wife to Daniel (Albert Martinez) and mother of three daughters. The story shows Estella, who struggles with illiteracy, trying her best to be a mother to her daughters as they go through the ups and downs of high school. Estella also has to cope with her mother Matilda (Nida Blanca) who lives with the family and often criticizes Estella for having never finished schooling. All in all, it’s a heartfelt, if harsh, picture of the nuances of mother-and-daughter relationships across generations.

Selma Blair stars in this 2016 film as Rigby, a photographer and mom-to-be who attempts to capture different mother-daughter relationships through film, leading her to examine her own relationship with her estranged mother. The film centers on different kinds of maternal relationships—each one unique and special in its own way. It highlights how every person’s relationship with their mother is loaded with its own tensions, grudges, and quirks. It features an ensemble cast that includes Susan Sarandon, Courteney Cox, Christina Ricci, Sharon Stone, and more playing mothers and daughters of every shape and form.

This 1983 film written by '80s teen movie king John Hughes stars Michael Keaton as Jack Butler, a newly unemployed father who must step into the role of homemaker and take care of his kids while his wife Caroline (Teri Garr) goes back to work. Jack quickly learns that being a stay-at-home parent is no easy feat and his struggles—amidst some funny, slapsticky antics—help bring their family closer together and strengthen his relationship with his wife. Like Jack, you’ll imagine yourself in the shoes of the woman of the house while watching this film—and you’ll definitely want to thank her for all she does once the credits start rolling.

Mother-daughter duo Bonnie (Allison Janney) and Christy Plunkett (Anna Faris) attempt to mend their relationship as well as themselves in this American sitcom. They work together to put their lives back in order and to overcome past traumas by attending Alcoholics Anonymous, all while Christy also tries to raise her kids Roscoe and Violet. The show is a lighthearted depiction of a dysfunctional relationship, but it’s filled with moments of truth and genuine wisdom among the punchlines.

Based on Emma Donoghue’s novel of the same name, this 2015 film tells the story of Joy Newsome (Brie Larson), a woman who has been held captive in a small room for seven years along with her five-year-old son Jack (Jacob Tremblay) who was born in captivity. Despite their living conditions, Joy does everything she can to make the room (essentially her son’s whole world) a happy and livable place for Jack. Eventually, Joy plans their escape. This is a heavier option as far as Mother’s Day films go, but it’s a great portrait of how strong and resilient a mother’s love can be through impossible hardships.

Little Women director Greta Gerwig’s debut film is a coming-of-age story starring Saoirse Ronan as the bold and headstrong Christine McPherson, who prefers to be called—you guessed it—"Lady Bird." Amid the usual high-school struggles of finding love and discovering oneself, Christine’s relationship with her mother Marion (Laurie Metcalf) is continuously highlighted throughout the movie in all its messy nuance. You’ll relate hard to scenes of indistinct yelling, angsty conversations, and repeated misunderstandings, all of which are intertwined with moments made up of the kind of connection you can only really have with your mom. Though the film is light and often laugh-out-loud funny, you’ll find that it comes to a satisfying slow burn of an emotional conclusion that will hit you like a gut punch and leave you wiping away tears.

Movies Entertainment Savvy Adventurer Seasoned Mother's Day Netflix Amazon Prime Studio B Lady Bird Gilmore Girls Bad Moms Monster-in-law Ang Tanging Ina Abakada Ina Mothers And Daughters Guide Mothers Day
Your Guide to Thriving in This Strange New World
Staying
In? What to watch, what to eat, and where to shop from home
OR
Heading
Out? What you need to know to stay safe when heading out