10 Movies and TV Shows Similar to Netflix's Never Have I Ever
Loading
Already a member? Log in
No account yet? Create Account
Spot.ph is your one-stop urban lifestyle guide to the best of Manila. 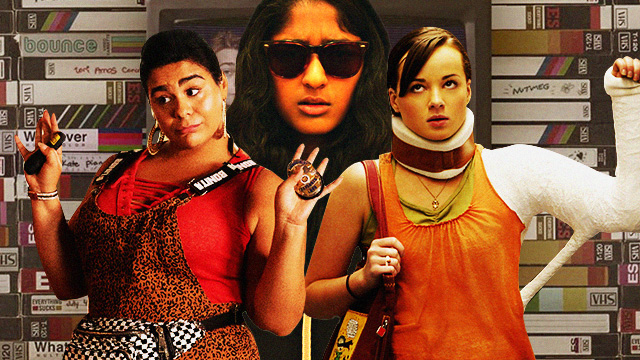 Love the show's offbeat humor and sharp wit? We round up some similar picks!

(SPOT.ph) Coming-of-age comedy drama Never Have I Ever has made quite a few appearances on Netflix’s daily top 10 list here in the Philippines since its premiere in April—it seems like local viewers just can’t get enough, and for good reason! The series follows Devi Vishwakumar (Maitreyi Ramakrishnan), a 15-year-old girl grieving her recently deceased father while also attempting to level up her high school social status along with her best friends Eleanor (Ramona Young) and Fabiola (Lee Rodriguez).

While high school films and shows often romanticize the experience, Never Have I Ever reveals the awkward perils and sometimes confusing, even silly feelings that we all went through in those days, though still with a lighthearted and funny script. The series was created by comedian Mindy Kaling and it’s partially based on the actress’ own real-life childhood. The show features Kaling’s signature brand of sharp, offbeat humor and the result is a show that is earnest, relatable, clever, and addicting.

If you liked Never Have I Ever, here are 10 movies and shows you might also enjoy:

If you love Kaling’s quirky, unapologetic humor, the first thing you need to do is check out her show The Mindy Project, which she both created and starred in following her stint on cult-fave comedy classic The Office. The Mindy Project follows obstetrician/gynecologist Mindy Lahiri (Kaling) as she balances her personal life, professional career, and romantic aspirations alongside her coworkers. It has the same clever quips and slick punch lines as Never Have I Ever (albeit with a more mature flavor) and you’ll have a blast watching Kaling be her most charming, authentic, and funny self.

Think of this film like 2007’s Superbad, but with two female leads—not quite as explicit with its humor, but just as much a comedy of its time. Olivia Wilde’s directorial debut Booksmart tells the story of best friends Molly Davidson (Beanie Feldstein—who is also Jonah Hill’s sister!) and Amy Antsler (Kaitlyn Dever) who are about to graduate high school. After dedicating their entire secondary school lives to getting good grades and following the rules, the two get into good colleges. On the last day of school, they realize that even the cool kids who partied every weekend got into good colleges, too. What follows is a night of risk, adventures, and a lot of wacky antics from two good girls trying to let loose.

British sitcom Derry Girls is set in 1990s Ireland amidst The Troubles in Derry, an era marked by riots and political unrest. Despite its serious backdrop, the show follows Erin (Saoirse-Monica Jackson), her cousin Orla (Louisa Harland), and their friends throughout their ups, down, antics, and adventures in an all-girls Catholic school. If you ever attended one, you already know the kind of crazy things that are about go down. The show’s irreverent, dark humor and charming ensemble cast will hook you right away.

Netflix original series On My Block premiered in 2018 and its third season was just released in March. It features four teens and best friends Monsé Finnie (Sierra Capri), Ruben Martinez (Jason Genao), Jamal Turner (Brett Gray), and Cesar Diaz (Jessica Marie Garcia) who grew up in a rough inner-city Los Angeles neighborhood as they begin high school. Amidst the trials of friendship, romance, and school, they deal with issues in their homes and communities. The smart, relatable, and flamboyant young characters make this one an enjoyable watch and a realistic portrayal of the exciting, but often awkward and difficult years of high school.

Two people who are total opposites and even enemies become friends due to circumstance and then eventually develop into something more—it’s a tried-and-tested formula, but one we could never really get enough of. High school students and debate team nemeses Lona Skinner (Sami Gayle) and Bennett Russell (Jacob Latimore) are forced to work together to win a state championship despite their rather tense relationship. After quite a few tiffs, they learn more about each other and develop a mutual understanding and even a friendship. You’ll be quickly invested in these quirky, three-dimensional characters, both for their individual charms and their budding relationship. This may be a little more serious than the lighthearted sitcom you might have been looking for, but it’s a fun, feel-good film nonetheless.

In case you missed this 2010s MTV gem, you can still watch it online. Fans of independent and outspoken female leads the likes of Devi or Juno MacGuff will root for (and sometimes scream at) Jenna Hamilton (Ashley Rickards). Not quite the popular girl in school, Jenna gets involved with jock Matty McKibben (Beau Mirchoff) and what follows is a lot of hilarious high-school drama that’s not quite your usual as well as some insightful (and angsty) narration from the protagonist—and of course, heartfelt life lessons and even a few kilig-inducing moments in between. This one will be an immediate guilty pleasure.

Everything Sucks is a teen drama set in the mid ‘90s and those who came of age in that era will want to check it out just for the music, fashion, and pop culture references. Luke O’Neil (Jahi Di'Allo Winston) and his two best friends are high school freshmen and social outcasts part of the A/V club at Boring High School (seriously, that’s what it’s called). The show follows the still-quite-juvenile friends as they navigate the difficulties of school, crushes, and fitting in—yeah, sometimes everything does suck. But you’ll get a lot of laughs along the way. Plus, can we take a moment to applaud a show about high school kids who actually look like they’re in high school?

This critically acclaimed British sitcom follows three friends Dylan (Johnny Flynn), Evie (Antonia Thomas), and Luke (Daniel Ings) who share a house together—ever imagined yourself living with friends? You already know it’s about to get messy. The series follows the three through the ups and downs of love—in particular, the fact that Dylan has chlamydia and must now contact all of his previous sexual partners as well as the romantic tension between Evie and Luke. Couple that with some good ol’ dry British humor and you’ve got a show that you’ll want to marathon nonstop.

This satirical telenovela stars Someone Great’s Gina Rodriguez as Jane Villanueva. Jane has vowed to stay a virgin until marriage, but her plan doesn’t quite go as expected when a doctor artificially inseminates her—by accident, of course. The now pregnant Jane is forced to adjust to motherhood while dealing with her family, her love life, and her own personal anxieties about the future. You’ll love the Latin American flavor of the show, which gives it a warm, intimate feel, like the antics of your own crazy Filipino family.

Just to make this list come full-circle, check out another comedy series written by Kaling sprinkled with the same brand of humor and wit. Gym owner Vince (Anders Holm) lives in Brooklyn with his younger brother Matthew (Andy Favreau). Vince leads the laid-back life of a bachelor and dates an endless string of women. However, his life gets turned upside down when his high school fling Priya, played by (surprise!) Kaling comes over one day to drop off their 15-year-old son Michael (Josie Totah)—you may find that Totah's exuberant young character steals the whole show and you'll enjoy seeing the animated little boy trying to get to know his father amidst wack high jinks and escapades.

Never Have I Ever Netflix The Mindy Project Booksmart Derry Girls On My Block Candy Jar Awkward Everything Sucks Lovesick Jane The Virgin Champions Savvy Adventurer Seasoned Entertainment Mindy Kaling Streaming Services Amazon
Your Guide to Thriving in This Strange New World
Staying
In? What to watch, what to eat, and where to shop from home
OR
Heading
Out? What you need to know to stay safe when heading out