90s Kids' Cartoons With Adult Jokes and Where to Watch Online
Loading
Already a member? Log in
No account yet? Create Account
Spot.ph is your one-stop urban lifestyle guide to the best of Manila. 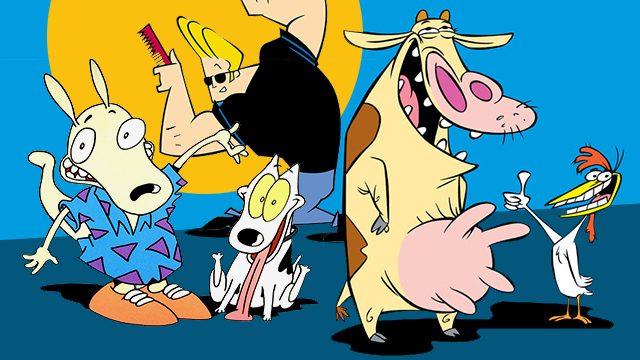 10 ’90s Cartoons That Were Naughtier Than You Thought

Plus, where to watch them now!

(SPOT.ph) Do you want to really feel your age? Turn on the TV—yes, we're talking about cable television programming here—and check out what today’s kids are watching. Nothing will make you realize just how old you are more than totally unfamiliar cartoons dominating the airwaves. Sure, you may think today’s cartoons are totally weird—but nothing will ever beat good old '90s ones. Chock-full of outlandish plots and absolutely inappropriate content, we take a trip down memory lane and revisit some of your favorite childhood shows—which, in retrospect, had more adult content than you originally thought.

Your parents probably should have stopped you from watching these '90s kids' cartoons:

Where to watch: Amazon Prime, Hulu; Watch the Rugrats movies on Netflix

Rugrats is arguably way up there with all the other beloved childhood cartoons of the '90s—still, that certainly doesn’t mean it was safe from the adult jokes. The show was rife with little Easter eggs for those with a grown-up sense of humor: from a reference to circumcision to Grandpa Lou’s X-rated movie rentals. There was even an episode called “Cradle Attraction,” a play on the Fatal Attraction film, which showed Chuckie getting his first ever girlfriend—who turned out to be pretty abusive. Also, have you ever heard of the fan theory called “Rugrats Never Happened” which insinuates that all the characters were just Angelica’s fever dream? Thankfully the show’s creators have debunked all that.

So as it turns out, the chicken came before the cow—wait, did we get the saying wrong? Well, this show was about 100% biological siblings Cow and Chicken (Chicken is older, but Cow is in the title first because it sounds better, we guess) and their daily adventures in a world where that’s completely normal. In case you’ve buried this cartoon in the farthest recesses of your mind, allow us to open that wound anew: their parents may or may not have been purely just the lower half (think manananggal, but U.S. suburbia version), they were continuously hounded by an overtly sensual demon-like being officially referred to as The Red Guy (who likes to walk on their butt cheeks), and last but not least, there’s a banned episode called “Buffalo Gals,” which featured a gang of biker girls breaking into people’s houses to uhm, literally munch on carpets.

A bunch of mentally unstable anthropomorphic animals living in a place called O-Town—what could be more child-friendly than that? Rocko was an Australian wallaby immigrant just trying to make it through life. This is the kind of show where if you took a shot for every innuendo you spot, you’d probably black out after around three episodes. Remember when Rocko appeared to be working a phone-sex hotline? More than just the casual and occasional obscene jokes, the cartoon dug pretty deep into social commentary: one episode aired in 1996 called “Closet Clown” featured one character, Mr. Bighead, hiding his secret “clown” identity from the town in an allegory for coming out, a storyline way ahead of its time.

Why anybody thought a kids’ show featuring “real monsters” studying how to scare humans would be good for the young ones is beyond us—still, we can’t say it wasn’t a hit. The show revolved around three young monsters named Ickis (the small, red imp-like one), Oblina (the fancy candy cane that could pull out her internal organs), and Krumm (the one holding his eyeballs). The monster world, aptly enough, was located in a vast dump beneath New York City where the creatures have created their own fully functioning economy—with toenail clippings as currency.

Polar-opposite brothers Daggett and Norbert (yes, the beavers) were cold-bloodedly kicked out of their family home after their parents had a second litter. The two then moved to their own dam in Wayouttatown, Oregon, where the series documented their daily life (which they spent mostly angry and bickering with each other). Not only was The Angry Beavers full of jokes you may not have gotten as a kid, this isn’t the kind of show you’d watch to look for a role model either—which TBH, makes it even more fun to watch as an adult.

We hardly think we’d still have to explain why Johnny Bravo, the fictional deluded borderline-harasser from our childhood, wouldn’t make it past today’s censors. This show would have been cancelled the moment the online world got even a whiff of the series’ premise. Still, it was fun watching the Elvis Presley parody continuously make a fool of himself. The ultra-narcissistic antics of Johnny were completely laughable, from putting on a ton of hair gel to being rejected by practically every woman he talked to, and they definitely still are! If you squint a little, you could even call it a commentary on toxic masculinity: Is it really Johnny’s fault he is as deluded as he is?

Where to watch: Hulu, Amazon

Who can forget Dexter yelling out “Deedee!” whenever his sister did pretty much anything? Aside from all the expected PG-shenanigans, you can also spot a couple innuendos you may have missed when you were younger. The prime example is, of course, when the words “Dad’s Trophy” were written across the female neighbor’s bottoms—right across the butt—and when animators snuck in a pretty risqué image of the parents' entangled limbs (they were playing Twister, after all). Remember when Dexter accidentally hired a stripper to replace his sister? And is it just us or is there something oddly sensual about the entire omelette du fromage episode?

This show was literally about a cat-dog hybrid with either end of the creature occupied by a head. How they poop and do other normal bodily functions, we wouldn’t know—or even care to know, really. CatDog was just one of those shows that had such a ridiculous premise that it was too good not to watch. The resulting episodes—which had very memorable storylines such as Cat and Dog physically hurting themselves to get back at the other, finding out that meat comes from animals (a.k.a. their own kind), and at one point, Cat even turned themselves inside out in an attempt to get rid of Dog—were probably not best consumed by the kiddies.

Where to watch: Hulu, Nick Hits channel on Amazon

Hey Arnold! is one of those cartoons that had an excellent storyline and cast of characters—the type of show that really made you invested and was probably a huge part of your childhood. That being said, it still wasn’t free from some pretty questionable moments.

The show revolved around Arnold, an inner-city kid who lived with his grandparents, and his gang of friends just making their way through life. It was peppered with a couple of adult-only instances courtesy mostly of Grandpa Phil (insinuated to have been a stoner) and even hard-hitting realities, such as when it was revealed that Mr. Hyunh had to give up his daughter during the Vietnam war and was now in the U.S. to try and find her again—and how could we not mention Helga’s unhealthy obsession with “football head”? Helga—kneeling before her Arnold altar—even said “Arnold, you make my girlhood tremble,” in one episode.

Nope, not even the sugar, spice, and everything nice (with an accidental dose of Chemical X) of the Powerpuff Girls was safe. The team behind the show found ways to squeeze in a couple of references that may have flown over your head as a kid (remember when their new neighbor Robyn told the Professor she was an “accident”?). Plus, the cast of sketchy characters include HIM, the creepy and flamboyant demon that tormented the girls and probably showed up in your nightmares; and Sedusa, who, well lived up to her name a little too well for a kid’s show. In one episode where she was disguised as Ms. Bellum, she helped sharpen the Mayor’s pencil in a scene that was not at all subtle.

Adventurer Savvy Cartoons Nostalgia Cow And Chicken Rocko's Modern Life Aaahh!!! Real Monsters The Angry Beavers Rugrats Johnny Bravo Powerpuff Girls Dexter's Laboratory Catdog Hey Arnold Streaming Services Guide Nick Hits Hulu Amazon Prime
Your Guide to Thriving in This Strange New World
Staying
In? What to watch, what to eat, and where to shop from home
OR
Heading
Out? What you need to know to stay safe when heading out