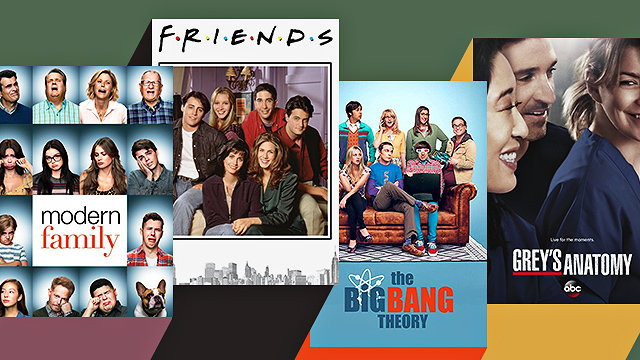 Catch up on hundreds of episodes!

(SPOT.ph) Gone are the days when you had to wait a whole week to watch the next episode of your favorite show on cable television. Thanks to streaming platforms, all you need is a trusty Internet connection, a monthly subscription, a pair of pajamas, a bowl of popcorn and you’re all set for hours of binge-watching on long-running shows you want to catch up on. You can even finish hundreds of episodes in a week if you want to throw caution to the wind and never hit pause—we kid, don’t do that, you need to sleep.

Also read:
10 Streaming Services for Those Who Love to Binge-Watch
10 Great Shows to Watch While Stuck in Traffic
10 TV Shows and Movies You Can Now Stream Over the Long Weekend

If you’re up for a serious marathon, these TV shows ran for nine seasons or more (and one is still going!):

Where to stream: Netflix
Available online: All 10 seasons, 236 episodes
Watch non-stop for: Three days and 14 hours

If you grew up in the '90s, it’s close to impossible that you don’t know anything about Friends. The sitcom follows a group of friends (what else?) living in New York: Rachel Green (Jennifer Aniston), Monica Geller (Courtney Cox), Lisa Kudrow (Phoebe Buffay), Joey Tribbiani (Matt LeBlanc), Chandler Bing (Matthew Perry), and Ross Geller (David Schwimmer). Its theme song, "I'll Be There for You" by The Rembrandts, is pretty much on the nose, describing the lives of these characters in the 10-season sitcom: "job's a joke," "broke," and "love life's D.O.A." The upside? They’re there for each other, as the song goes.

With most of the original characters either dead or in another country, it's hard to imagine that Grey's Anatomy just aired their 363rd episode on April 9 and has been commissioned for another season by the American Broadcasting Company. The story follows Meredith Grey (Ellen Pompeo), who—along with fellow doctors Cristina Yang (Sandra Oh), Izzie Stevens (Katherine Heigl), Alex Karev (Justin Chambers), and George O'Malley (T.R. Knight)—try to survive the surgical residency program at the fictional Seattle Grace Hospital (later renamed Grey-Sloan Memorial Hospital). They all start as young and hopeful interns and work their way to becoming residents and attendees, all while trying to overcome weird medical cases, complicated hospital romances, and heartbreaking tragedies.

Where to stream: Amazon Prime
Available online: One of 15 seasons, 175 of 580 episodes
Watch non-stop for: Seven days and 12 hours

Unsolved Mysteries documents conspiracy theories, alien abductions, and unsolved crimes and has been around since 1987. Originally hosted by Robert Stack, the show jumped from one network to another until its 13th season in 2002. It was later revived as a 175-episode season after a six-year hiatus by Spike TV with Dennis Farina as the host. The two-year run was split into eight seasons on Amazon Prime and YouTube. Its 15th season, which is a 12-episode reboot, premiered on Netflix on July 1.

The 12-season Two and a Half Men follows two full grown men and brothers Charlie (Charlie Sheen) and Alan Harpers (Jon Cryer) plus the latter's son Jake (Angus T. Jones). Charlie's bachelor life is made even more complicated when Alan and Jake move into his Malibu beach house.

Where to stream: Netflix
Available online: Eight of nine seasons, 124 of 134 episodes
Watch non-stop for: Three days and 15 hours

Legal drama Suits' premise is simple: College dropout Mike Ross (Patrick J. Adams) ends up working as a law associate for Harvey Specter (Gabriel Macht) in a fictional New York City law firm despite never having attended Harvard Law School, or any law school for that matter. But it's season after season of legal showdowns, love and lies, and family and friendship that would make you want to petition Netflix to put the last season online already.

Adapted from the BBC series of the same title, American mockumentary sitcom The Office is a funny depiction of the lives of office employees in the fictional Dunder Mifflin Paper Company in Scranton, Pennsylvania. It stars Steve Carell as regional manager Michael Scott, who tries his best to be a relatable and funny leader, but ends up otherwise.

Where to stream: Netflix
Available online: Eight of nine seasons, 94 of 103 episodes
Watch non-stop for: Two days and 10 hours

This anthology horror television series treats one whole season as a self-contained miniseries with its own title and own story—the first installment, for example, is dubbed "Murder House." While the ninth season is yet to be streamed on Netflix, you have eight whole seasons to marathon until the dead of the night if you dare. The series was renewed for a 10th season in 2021.

When The Big Bang Theory aired their last ever episode on May 16, 2019, the heartbreaking series finale was touted as the end of era in sitcom programming. It follows socially awkward scientists Sheldon (Jim Parsons), Leonard (Johnny Galecki), and Raj (Kunal Nayyar); and engineer Howard (Simon Helberg) as they go through the ups and downs of their friendship, respective careers, and love lives. Rounding up the main cast are Penny (Kaley Cuoco), Amy (Mayim Bialik), and Bernadette (Melissa Rauch). The 12-season show is peppered with pop-culture references on science fiction and comic books.

How I Met Your Mother narrates the story of how Ted Mosby (Josh Radnor) met the mother of his kids Luke and Penny, now all grown up in 2030. But this bookend serves as a jump-off point to a whole flashback that starts in 2005, where Ted is a 27-year-old hopeless romantic and architect living in New York and often hangs out at a bar with his best friend Marshall Eriksen (Jason Segel), Marshall's girlfriend-slash-future-wife Lily Aldrin (Alyson Hannigan), and playboy Barney Stinson (Neil Patrick Harris). His main love interest is Canadian news reporter Robin Scherbatsky (Cobie Smulders), who turns out to (spoiler alert!) not be the mother.