Medical Drama Series You Can Watch on Netflix and Amazon Prime
Loading
Already a member? Log in
No account yet? Create Account
Spot.ph is your one-stop urban lifestyle guide to the best of Manila. 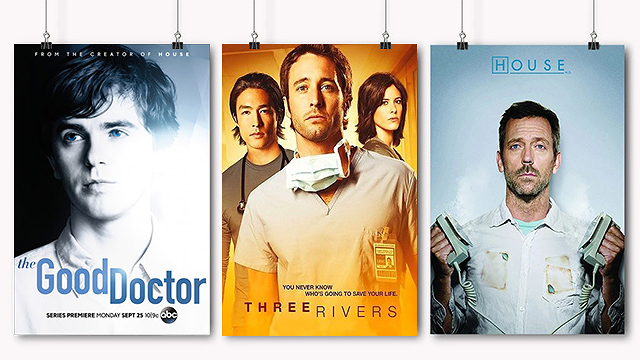 From The Good Doctor to House M.D.

(SPOT.ph) Whether inside or outside the hospital—or both—the field of medicine and its people have a rich reservoir of stories that need to be told. These narratives may be based on true stories or inspired by the everyday heroism of doctors, nurses, and first responders risking their lives to save lives. This paradox of vulnerability and toughness has helped fuel shows like Grey's Anatomy and ER, not to mention the thrill of watching them solve the most unsolvable medical cases. We round up binge-worthy medical dramas, comedies, and documentaries that would make you feel like you’re right there in the thick of things.

Also read:
10 Medical K-Dramas to Put on Your Watch List
10 TV Shows You Can Finish in a Week If You Never Hit Pause

Add these medical TV shows to your must-watch list:

Where to stream: Netflix (starting July 25)

Most surgeries in Grey's Anatomy start with Derek Shepherd's (Patrick Dempsey) famous line: "It's a beautiful day to save lives!" And save lives they have (or at least, they try everything they can). Meredith Grey (Ellen Pompeo) and fellow doctors Cristina Yang (Sandra Oh), Izzie Stevens (Katherine Heigl), Alex Karev (Justin Chambers), and George O'Malley (T.R. Knight) learn the ins and outs of every medical case as surgical interns (and later, residents and attendees) at the fictional Seattle Grace Hospital (later renamed Grey-Sloan Memorial Hospital). The show is scheduled for a 17th season in 2021 (fingers crossed!).

Where to stream: Amazon Prime Video (Available with Prime membership)

House or House M.D. follows medical genius and self-medicating Dr. Gregory House (Hugh Laurie), who tries to figure out a patient's diagnosis in the most unconventional and controversial ways. More often than not, he gets into disagreements with fellow doctors and his own team of diagnosticians at the Princeton–Plainsboro Teaching Hospital in New Jersey. Rounding up the cast are Department of Oncology head Dr. James Wilson (Robert Sean Leonard), endocrinologist Dr. Lisa Cuddy (Lisa Edelstein), neurologist Dr. Eric Foreman (Omar Epps), intensivist Dr. Robert Chase (Jesse Spencer), and immunologist Dr. Allison Cameron (Jennifer Morrison). The show ran for eight seasons and bagged the Emmys for Outstanding Writing for a Drama Series in 2005 and for Outstanding Directing in a Drama Series in 2008.

Where to stream: Amazon Prime Video (Available with Prime membership)

British medical drama Bodies is based on Jed Mercurio's 2002 novel of the same title. The doctor-turned-novelist-turned-scriptwriter created the story of Rob Lake (Max Beesley), who is training for specialization in obstetrics and gynecology under the tutelage of Roger Hurley (Patrick Baladi). Lake later finds out that Hurley is not as competent as he is believed to be. Bodies was cited as the Best Drama Series in 1995 by the Royal Television Society.

Cups and cups of coffee, almost zero sleep, and medical tragedies during odd hours are just some of the things that face doctors and nurses in the graveyard shift. The Night Shift follows this exhausting life of the late-night staff in the emergency room of fictional San Antonio Memorial Hospital. The characters include three doctors who have had experience serving as army medics: Dr. TC Callahan (Eoin Macken), who is struggling with the trauma of seeing his brother die on the battlefield; Dr. Topher Zia (Ken Leung); and Dr. Drew Alister (Brendan Fehr).

Where to stream: Amazon Prime Video (SD for sale)

A break from all the medical drama, Doc Martin gives a dash of comedy in the life of successful surgeon Dr Martin Ellingham (Martin Clunes), who for some reason develops a fear of blood that forces him to stop practicing surgery. He returns to his countryside hometown in Portwenn where he serves as the local doctor.

Get a glimpse at what it's like to work in the emergency room through this series, all the while maintaining personal and professional relationships. Set in the fictional Gaffney Chicago Medical Center, Chicago Med follows the lives of attending physician Dr. Will Halstead (Nick Gehlfuss), first generation Brazilian-American nurse April Sexton (Yaya DaCosta), pediatrician-turned-ER-doctor Dr. Natalie Manning (Torrey DeVitto), and chief resident Dr. Ethan Choi (Brian Tee). The show is the third installment in NBC's Chicago franchise, which also includes Chicago Fire, Chicago P.D., and Chicago Justice.

Alex O'Loughlin from Hawaii Five-0 stars in the 13-episode series Three Rivers. He plays the role of famous cardiothoracic surgeon Dr. Andrew "Andy" Yablonski, who is on his way to head Three Rivers Hospital's transplant department. He is joined by Katherine Moennig (The L-Word) who is cast as surgical fellow Dr. Miranda Foster and Daniel Henny (Criminal Minds) as ophthalmologist Dr. David Lee. The series covers the topic of organ transplants through the lens of donors, recipients, and doctors.

Based on the 2013 award-winning South Korean medical drama series of the same title, The Good Doctor follows young surgeon Shaun Murphy (Freddie Highmore), who is autistic and has savant syndrome. He relocates from his hometown in Wyoming to California to work at San Jose St. Bonaventure Hospital, where he tries to prove that his condition does not make him less of a doctor.

Guide Medical Drama Grey's Anatomy Er House Md Bodies The Night Shift Doc Martin Lenox Hill Chicago Med Documentary Three Rivers The Good Doctor Streaming Services Netflix Amazon Prime
Your Guide to Thriving in This Strange New World
Staying
In? What to watch, what to eat, and where to shop from home
OR
Heading
Out? What you need to know to stay safe when heading out