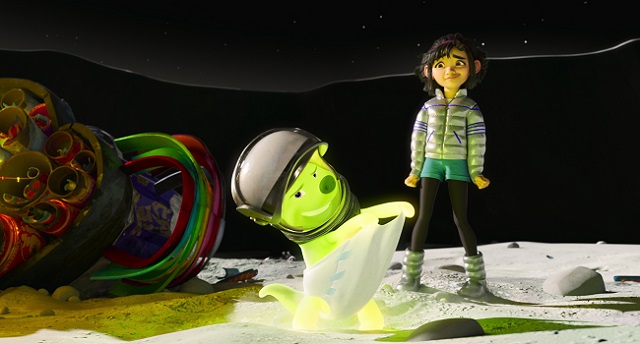 (SPOT.ph) Raise your hands if you have ever cried while watching an animated movie before! Hands raised? Don't worry, you're definitely not alone. Animation just hits hard sometimes—and if you're in need of a good emotional outlet, then keep Over the Moon on your radar. The film lands on Netflix on October 23 and it is shaping up to be one heck of a ride; just check out the trailer below:

Over the Moon takes a beloved Chinese legend, that of the moon goddess Chang'e, and turns it into something else entirely. Fei Fei (voiced by Chinese-Filipina Cathy Ang) is a science-savvy young girl hellbent on proving the existence of Chang'e (voiced by Hamilton star Phillipa Soo) whom she believes resides on the moon waiting for her one true love—as told to her by her late mother (yes, the mom dies, we told you this was a tearjerker!).

Hanging on to what she believes is the last connection she has to her mom, Fei Fei builds a rocket to the moon. Things then take a turn for the strange when she finds herself in the trippy landscape of Lunaria, the moon city ruled by goddess Chang'e—who also happens to be a popstar in her kingdom. Oh, and did we mention this is a musical?

So first thing first, this is arguably one of the biggest animated movies to star an all-Asian cast. At the lead is the fierce newcomer Ang, whose parents are both from the Philippines. The New York City-based artist shares, "They immigrated from the Philippines and so my mom is from Nueva Vizcaya. She's from a small town called Bagabag and my dad is from Ongpin." Check out just how awesome her singing voice is with the lyric video for the film's lead song, "Rocket to the Moon."

Fun fact: Ang was originally brought in to record demos of all the movie's songs but was so good she ended up getting cast as the lead. "I was supposed to record my songs last and so I was getting more nervous throughout the day," she shares in the interview. "I remember getting into the booth and seeing everyone, all the composers the creatives, just like looking up with their phones all excited. And I was so anxious," Ang says laughing. "But I closed my eyes, just imagined I was Fei Fei and I connected with the music in a way that I never had before."

And if you need any other reason why Ang was promptly casted as Fei Fei, just note that the final version you hear in the movie was the Chinese-Filipina artist's first record attempt!

"I think that kids everywhere will be excited about seeing their culture on screen, and if you're an Asian-American kid, they'll be more proud of themselves for being Asian," added Ang, who explained that her experience making the film really helped her get back to her roots.

Joining Fei Fei as the moon goddess she's looking for is Soo, the Tony Award-nominated Hamilton star. Soo shared in the press notes that her first brush with Chang'e was through Amy Tan's children's book The Moon Lady, which her Chinese-American father used to read to her. "I was so excited to first be asked to approach material coming from my own experience as an Asian woman, but also to bring a little bit of a modern twist to this very traditional story," she shared.

And indeed the Chang'e in the film is not at all how tradition would dictate. "I think what's so unique about Chang'e is that she is the myth, the legend, the Goddess. So she's larger than life," shares Soo in the interview. For this updated version of Chang'e, "I definitely took notes from Lady Gaga, Katy Perry, Beyoncé, and the world of K-Pop at large. I was just so interested in finding that very heightened performative aspect of of this goddess."

To match the larger-than-life aspect of the immortal Chang'e, the team asked Guo Pei—the famous Chinese fashion designer behind Rihanna's massive yellow gown at the 2015 Met Gala—to design her outfits. "It really wasn't until I saw the costume design that Guo Pei had contributed to Chang'e and her look, and what she wears, and how she dresses, that it clicked and I was like, 'Aha, okay, this is where the bar is set. Now I got to get there," laughs Soo.

The film also happens to be Disney legend Glen Keane's full-length feature film directorial debut. Keane was a huge part of the Disney movies that probably made your childhood: from designing Ariel in The Little Mermaid to being animation director in the game-changing Tangled movie, and of course, bringing to life Kobe Bryant's Oscar-winning short Dear Basketball.

"When I read the script I thought 'I feel like I was born to do this'," shares Keane in a roundtable interview with SPOT.ph. "I just fell in love with this character, Fei Fei. She's 12 years old and she wants to build a rocket to the moon. How in the world is that going to happen?" he jokes.

"Walt Disney was always talking about the 'plausible impossible'," said in the press notes to the film. So it was Fei Fei's ability to believe in the impossible that really sealed the deal for him, "I mean, she's got to know science and physics and math—and she does! Then she's got to believe that there's a goddess on the dark side of the moon [as well]. That is her mom's faith and imagination coming through for her. These are elements that are in all the characters that I've animated, they have that that spark," shares Keane in the interview.

Keane came on board in 2017 when he was giving a talk on thinking like a child and believing the impossible was possible during the Annecy Film Festivel. "Basically I was tackled," he jokes, by producer Peilin Chou of Pearl Studios and Melissa Cobb, vice president of animation over at Netflix, who presented the script to him. And now, he shares, the film turned out to be "the highlight of my career so far." Which is really something else considering all the other titles he has under his belt! Now all you have to do is watch Fei Fei's adventure yourself and see what Keane means.