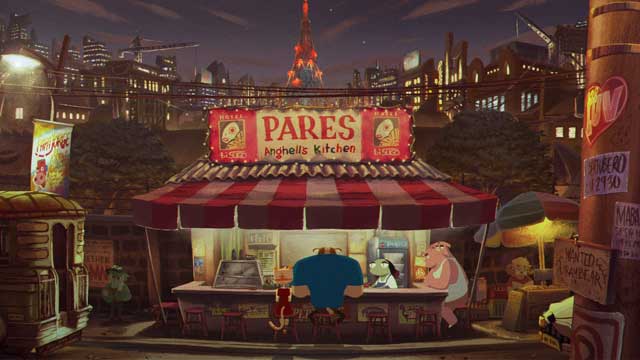 The Pares Inside Joke in Netflix’s Hayop Ka!, Explained

The cheap, filling dish is related to Nimfa's aspirations in life.

(SPOT.ph) From the title alone, it’s pretty obvious what Hayop Ka! The Nimfa Dimaano Story is all about. Yes, this Netflix animated film which you can already stream on the platform features anthropomorphic animals. And yes, the lead character’s name is—you guessed it—Nimfa (voiced by Angelica Panganiban), a pretty department-store salescat who sells perfume and finds herself in a love triangle between Roger (voiced by Robin Padilla), her macho mongrel boyfriend who works as a janitor, and Iñigo Villanueva (voiced by Sam Milby), a wealthy businessdog.

The plot is as familiar as it could get with its teleserye-ish take on Nimfa’s life and love life—it is inspired by late-night radio dramas dispensing love advice to callers‚ after all. But what makes this movie stand out is its visuals. We caught up with director Avid Liongoren, art director Jether Amar, and writer-slash-producer Manny Angeles in an online interview to talk about the animated film’s look and the elements they decided to include in it.

“Ang goal is to capture the grittiness and the feel of Manila, at the same time, ihalo namin sa animal themes,” shares Amar. It is for this reason that the buildings and structures have ears. “‘Yong mga electrical posts, gawa siya sa fish bones or dog bones,” adds Liongoren. “So anthropomorphic... familiar siya pero ina-anthropomorphize namin ‘yong overall na design.” Though this is a digital production, Liongoren says that everything was hand drawn. Grain was added for an organic feel, “para ikasal lahat ng elements and to hide ‘yong mga konting imperfections,” explains Amar.

Aside from the familiar Pinoy elements and the endless puns as seen on billboards, labels, and brands, a pares joint is prominently featured all throughout the film. Angeles explains that pares or beef stew is a cheap go-to meal that’s connected to how the relationship of Nimfa and Roger is going. “Parang, ‘Ito lang kinikita natin, hindi tayo makapagluto sa bahay, dadaan at dadaan lang tayo sa paresan.’ So in a way it was being repetitive for Nimfa kaya naghahanap siya ng iba,” Angeles says.

Liongoren randomly shares how he calls the ABS-CBN transmitter as “Eiffel Tower” from the vantage point of the Scout Triangle area, which is probably where the tower behind the pares joint in the movie takes after. Angeles also mentioned how a lot of these pares eateries could be found in Quezon City.

Netflix Hayop Ka Avid Liongoren Manny Angeles Jether Amar Streaming Services Adventurer Savvy Animation
Your Guide to Thriving in This Strange New World
Staying
In? What to watch, what to eat, and where to shop from home
OR
Heading
Out? What you need to know to stay safe when heading out