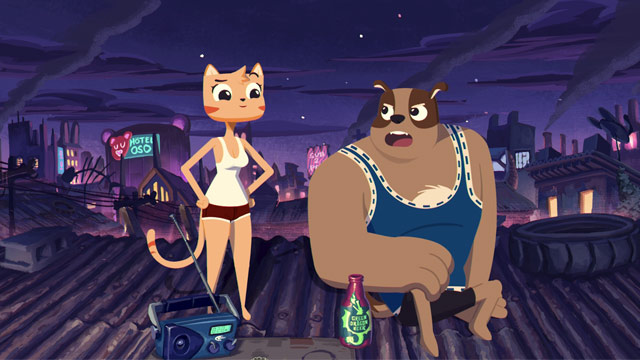 Take a Peek Into the Life of a Sexy Pussycat in This New Hayop Ka! Trailer

A.k.a. how Nimfa Dimaano finds herself in a love triangle.

(SPOT.ph) What's life without unexpected situations to shake things up? For sexy pussycat Nimfa in the upcoming animated Pinoy comedy Hayop Ka! The Nimfa Dimaano Story, it entails getting involved with two seemingly opposite, attractive men. Check out the official trailer below:

The trailer starts off with a warning of sorts: "Ang pelikulang ito ay may maseselang tama, lengwaheng kanto, karahasan, sekswal, que horror, droga! Na hindi angkop sa mga kawawang bata!" There goes a seemingly new rendition of the Jose Mari Chan hit, "Beautiful Girl," as we see Nimfa (voiced by Angelica Panganiban), a pretty pussycat who works as a saleslady and Roger (voiced by Robin Padilla), her macho mongrel-boyfriend who works as a janitor being all lovey-dovey despite the circumstances. Everything seems to be well and good until a fortune teller tells Nimfa that she will fall in love with two men at the same time. Nimfa then crosses paths with Iñigo Villanueva (voiced by Sam Milby) the rich business-dog who has his way with women. As their chemistry ignites, madness ensues and we're left wanting to see the entire movie to find out how it all goes down. (The reference to Taguro of Ghost Fighter! in the trailer got us LOL-ing.)

In September, there were online calls to boycott Hayop Ka! due to Padilla's involvement in the movie. Regular folks and artists responded to the issue by asking audiences to instead focus on the animators who worked on the animated flick. One of the film's animators, Kevin Eric Raymundo of Tarantadong Kalbo webcomics reminded folks to "Please don’t judge it by its [voice actor]. He doesn’t represent the movie as a whole."

Hayop Ka! The Nimfa Dimaano Story is set to arrive on Netflix on October 29.