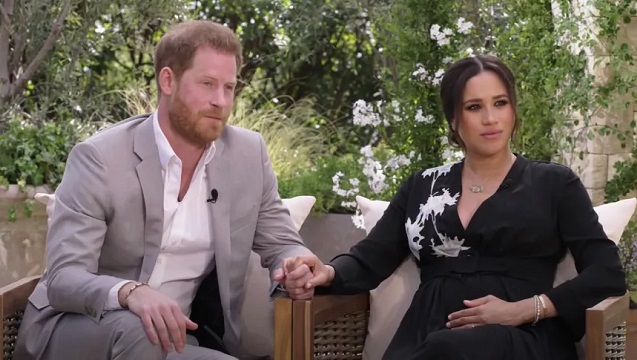 The Revelations Worthy of The Crown From That Oprah Interview

(SPOT.ph) Look, we know by now you've heard about "Royal couple" Prince Harry and Meghan Markle having just had one of the biggest Oprah interviews ever (quotation marks because that status seems rocky at best right now). And truth be told, while we're still reeling from all the revelations, we can't help but imagine how the Netflix series The Crown creators would tackle it.

The Crown, although a fictionalized retelling of the British royal family's story—emphasis on the fictionalized—has had everyone hooked on its portrayal of what is arguably the most popular, not to mention powerful, families right now. We all know the British royal family has always been secretive, as colonial history proves, and the show breaks the shiny veneer a little bit more with every season, in a way that constantly has everyone waiting for more. Remember how Helena Bonham Carter as Princess Margaret joked about Imelda Marcos? And how they tackled the story of Princess Diana?

"The Institution" or "The Firm" as Markle and Harry referred to the people who appear to be running the show—as in the actual royal family and not the series—have always seemed incredibly precise about how the British royalty are seen. So it's fun to imagine how The Crown would tackle the details from Prince Harry's and Markle's Oprah interview.

The Crown-worthy revelations the Oprah Interview With Harry and Meghan Markle:

Oprah said "What?!" at least three times—and we think this news really is deserving of being able to break the media mogul's composure. Markle told Oprah that as part of the many conversations that were being had as she was pregnant with her and Harry's first child, skin color was on the table, too, specifically about how "dark" he or she would be, and "what that would mean or look like."

Markle is the first person of color to have had such a senior role in the British royal family. She told Oprah about "how important represention is."

The media frenzy that followed Markle and Harry wherever they went and whatever they did arguably peaked when, months after their wedding, tabloids began screaming that Markle had caused her sister-in-law, Kate, to cry due to something about the flower girls' dresses. Markle revealed to Oprah that it was actually the "reverse" that had happened but she does not want to "disparage" her sister-in-law.

Oprah also dipped into how differently the press had covered Markle's and Kate's pregnancies. Later on, Prince Harry also touched on how press coverage affected his mother's, the late Princess Diana's, life so negatively.

Markle's Struggle With Mental Health While Living at the Palace

Prince Harry shared how he would come home from work only to see Markle crying while breastfeeding their child. This heartbreaking image is presumably one of the key factors that cemented their decision to step down as senior members of the royal family.

"Almost unsurvivable," is how Markle described the ordeal to Oprah, about all the tension and the underlying problems with living in the U.K. When asked about regrets, Markle replied, "My regret is believing them when they said I would be protected."

Adventurer Savvy Netflix The Crown Streaming Services Oprah Prince Harry Meghan Markle Staying In Heading Out
Your Guide to Thriving in This Strange New World
Staying
In? What to watch, what to eat, and where to shop from home
OR
Heading
Out? What you need to know to stay safe when heading out