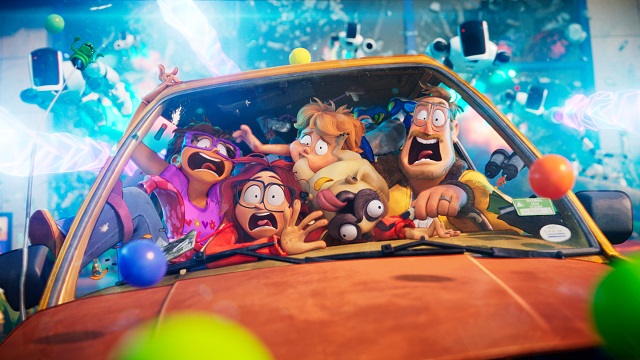 (SPOT.ph) Here’s a super specific pet peeve: when you’re helping an elder out with something online and they literally press “W” three times while typing the URL. Imagine it. Tak. Pause. Tak. Pause. …Tak. And then you start screaming. Internally, of course, because they probably went through similar emotions teaching you how to use a spoon.

It’s this kind of disconnect that sets up Mitchells vs. The Machines, the latest and possibly greatest animated movie on Netflix. From the same humans behind that awesome 3D-style animation of Spider-Man: Into the Spider-Verse and The LEGO Movie is a movie about a robot uprising and the family that tries to stop it—with a dad that’s probably way more technologically inept than yours is. It's now streaming on Netflix.

Katie Mitchell (voiced by Abbi Jacobson) is your tech-savvy teen who loves making videos online—mostly with their, erm, unique pug Monchi as the star. When her much-less-tech-savvy dad Rick (Danny McBride) decides a family road trip is in order to send her off to college, the Mitchells embark on a cross-country adventure—that quickly goes south, figuratively speaking, when the machines begin to take over. The Mitchells, Katie, Rick, mom Linda (Maya Rudolph), younger bro Aaron (Mike Rianda) and Monchi somehow become the last humans available to save the world. Yup, all of humanity’s survival hinges on the four-team Mitchells (plus pug!) and some unexpected help they get along the way.

The Mitchells vs. The Machines

If the outrageous settings and hilarious characters feel familiar to you, that’s because this movie was directed by Mike Rianda, the same brain behind Disney’s critically acclaimed series Gravity Falls. So you give that type of person the power of Sony animation (read: Next-level Spider-verse style) and you’re bound to get something different.

Rianda began working on this film six years ago after he was tapped by Sony for an original animated movie. “I couldn’t believe it. It felt like someone was offering the keys to their dad’s Corvette to a sweaty film school student,” he said in the press notes. It was his chance to make something unique and personal. “So when I was coming up with ideas I basically combined the thing I love the most in the world—my crazy family—and the thing I loved the most when I was a kid—killer robots.”

One of the main debates of the digital age is how it has affected our connections. Connectivity is no problem obviously: you can call workmates hundreds of miles away on Zoom while in loungewear, have thousands of followers on your dog’s IG page, and the like, but how many of those links are the type that your parents think of when they say “making connections?”

There is one scene in Mitchells vs. The Machines that points to this generational difference with what we think life is about. Somewhere, sometime along the trip in a roadside stop, Katie starts filming everything through her smartphone. Rick tells her that she would better experience things if she puts the phone down, to which she replies, “But dad, this is how I experience things.” Note that she literally has her dad in a hilarious cat filter while saying this, but we’re going to say that’s part of the nuance.

Is Mitchells vs. The Machines pro or anti-technology?

The robot uprising begins with one overly smart smartphone named PAL that is hilariously and perfectly voiced by Olivia Colman. Yup, the very same item your parents most likely joke about being surgically attached to your hand. PAL has made everything easier, including making connections, so kind of aptly in a way, it also becomes the root of the robot uprising. Both making and destroying connections.

Making connections is both “easier and harder” today, says Beck Bennet, the voice of Eric-slash-the Pal Max robots in an interview with journalists from Asia Pacific. “I’m seeing people's lives all the time,” because of social media and “at the same time I'm seeing like a new generation, communicating so much more than I do and having sort of ‘code.’” There is that strange new Internet culture that changes depending on what part of the digital world you’re on, so “it can be confusing.” It’s like when you see a new meme and you have to unearth different layers—or lack thereof—to get what the joke is. We get it.

Maybe it’s also in the quality of connections. “Well, we're all connected; like, I know what everyone's up to, but I'm finding it harder to find [a] deeper connection,” says Jacobson.

“Just like anything there are good elements, [like it] connecting us but also taking away from that personal [level],” says Rudolph, who, like her character Linda, is navigating raising kids with technology. She explains that she has even tried to get her kids to “use the telephone to call their friends, which could limit screen time, and it’s amazing how different the conversations are.” A literal landline in this day and age, yup. Still, “I wouldn’t call [technology] a necessary evil, I wouldn’t call it ‘evil.’ I mean, it’s incredible what it’s done.”

The Mitchells struggle is more than just stopping the end of humanity—though that was the clear priority—it is being able to meet in the middle. Especially where digital expert Katie and her tech-hater dad are concerned.

As Rianda explained, Mitchell vs. The Machines is an incredibly personal story. It may be about a family trying to defeat technology—consistently praised for connectivity and consistently blamed for the lack of connection—but they show that it’s all about how you use it. And the Mitchells learn to use it well. Yup, even Rick.

The Mitchell vs. The Machines is now streaming on Netflix.

Adventurer Savvy Seasoned Netflix Sony Maya Rudolph Kids Mitchells Vs The Machines Streaming Services Staying In Greener
Your Guide to Thriving in This Strange New World
Staying
In? What to watch, what to eat, and where to shop from home
OR
Heading
Out? What you need to know to stay safe when heading out