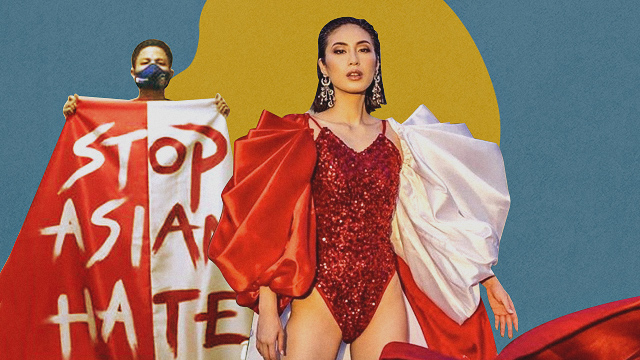 Yup, the hands behind the "Stop Asian Hate" statement were Filipino.

Miss Universe Singapore Bernadette Belle Ong had one of the most unforgettable National Costumes at the 69th Miss Universe stage—one that carried a very important message about stopping hate against Asians. And it looks like it was her close ties to the Philippines, where she was born, that made the costume possible.

Ong tapped Filipinos to design and work on her national costume. Even as she represents her countrySingapore by wearing their national colors, there's still that Filipino touch and influence to the costume.

On Instagram, the candidate identified the people behind her (literal) statement piece. "I reached out to Filipino designer [Arwin Meriales] to create a design of my own and he executed! When he offered to get [Paulo Pilapil Espinosa] to hand-paint something at the back, I knew straight away that it had to be about the movement revolving around racial spite and prejudice!" She added that the two Pinoys only had two days to make the national costume.

The project was under a massive time constraint as it had to be flown from the Philippines to Singapore, then the U.S., where the pageant was held. Plus, turns out Meriales was even studying for exams at the same time as designing the project. With all the challenges, "I'd say this is a huge win for everyone! We got our message across loud and clear! Thanks for roaring back at us with love and praise!!!" wrote Ong.

Who Are the Pinoys Behind Miss Universe Singapore's National Costume?

Arwin Meriales, who is still a student on top of being a fashion designer, celebrated the piece he created for Ong. "My piece got into the Miss Universe stage!" He shared that he was "hesitant" to accept Ong's project because of the time constraint and his load as a student but, "What made me say yes? It's not just a national costume. It's a statement and protest to stop Asian hate. Who wouldn't want to be part of such cause."

The hand behind the words "Stop Asian Hate" on Bernadette's cape also belongs to a Filipino student: Paulo Pilapil Espinosa. According to his IG bio, they are a "future architect."

Espinosa wrote that "Ms. Bernadette is not just a candidate. She's a woman with a mission. It was her idea to make the natcos competition a way to raise awareness for a very relevant cause. I think we can all agree that Bernadette was able to raise the message to the Universe, loud and clear."

Racial tensions in the U.S., where the pageant was held, spiked again in early 2021 after crimes against Asians surged. A shooting in Atlanta in March left eight people, six of whom were Asian women, dead.

Adventurer Savvy Seasoned Miss Universe Singapore Syndication Syn-00295 Staying In Heading Out Hard News
Your Guide to Thriving in This Strange New World
Staying
In? What to watch, what to eat, and where to shop from home
OR
Heading
Out? What you need to know to stay safe when heading out