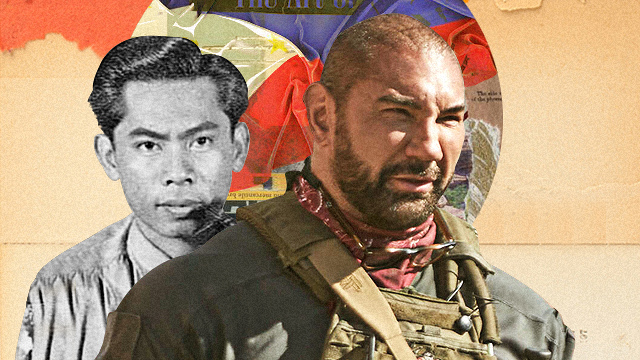 (SPOT.ph) Relationships are front and center in Zack Snyder's latest action-filled zombie heist film. We know that sentence doesn't add up at first read but if you've watched Netflix's current number-one title on the trends list, then you know what we mean. Army of the Dead packs a surprising emotional punch amid all the zombie-killing spectacle—courtesy of the loose ends between main character Scott Ward and his daughter Kate, as played by Dave Bautista and Ella Purnell.

For the unitiated: The movie is set in a world where Las Vegas has been walled off, thanks to the fact that it is now completely inhabited by not-so-mindless zombies. Years ago, a war was fought to contain the area—but that's not what Army of the Dead focuses on. Instead, the main story starts years after the fact.

Zombie-war hero Scott Ward (Bautista) has not completely moved on from his time in  the frontlines. A visit from a shady billionaire, though, has him putting together a cast of badass oddballs to enter the zombie city once again and retrieve an obscene amount of money before the government nukes the entire place. We've got alpha zombies, lots of guns, a heist, tons of action, and an emotional lead whose story actually goes deeper for Bautista than viewers may realize.

Bautista's role as a war veteran is apt when you learn that his grandfather, a Filiipino immigrant named Alfonso Bautista, was a veteran, too. He "earned his citizenship by fighting for the USA in World War II," shared the grandson in an appreciation post on Instagram in March 2020, accompanied by a photo of his grandparents and uncles.

Dave Bautista on His Filipino Grandfather

Alfonso was a big part of Bautista's growing-up years, shares the actor in a roundtable with SPOT.ph. He remembers his grandfather worked at a barbershop, so "I grew up in his barber chair." Bautista specifically recalls that they used to talk about food a lot, with his lolo constantly bringing him to McDonald's.

Unfortunately, Bautista also shares that, much like Scott and Ella's relationship, there are some regrets. When asked whether he was able to take from his grandfather's experiences during World War II for the movie, Bautista explains that "when you're younger, you don't think about having those conversations with your grandfather because all you see is right there, what's in front of you."

Alfonso passed when Bautista was just 18 years old. "Now that I've gotten older, I live with regret of not asking him, of not finding out more about his childhood, where he was from, about my relatives, about his upbringing, and about his time in the military."

Bautista cheekily adds that he has heard "from a lot of people in my family" that when Alfonso first arrived in the U.S., specifically San Francisco, "he was wild as hell." The war vet was reportedly a bit of a terror of the streets says Bautista with a hint of admiration before saying, "I didn't know that side of my grandfather."

With his history as a professional wrestler and his build, Bautista admits that it's easy for people to typecast him as the opposite of an emotional person—but it is exactly that more vulnerable side of Scott Ward that attracted him to the role. As he jokes in the interview, when it comes to being madrama,"I'm so Filipino."

So Bautista may have missed out on some of his grandfather's stories—a fact that is "hard to live with sometimes," he shares—but it's clear that what time they did have together is a big part of what the actor is today.

Adventurer Savvy Netflix Streaming Services Army Of The Dead Dave Bautista Staying In
Your Guide to Thriving in This Strange New World
Staying
In? What to watch, what to eat, and where to shop from home
OR
Heading
Out? What you need to know to stay safe when heading out