Netflix Reveals Cool VFX For Army of the Dead Zombie Tiger
Loading
Already a member? Log in
No account yet? Create Account
Spot.ph is your one-stop urban lifestyle guide to the best of Manila. 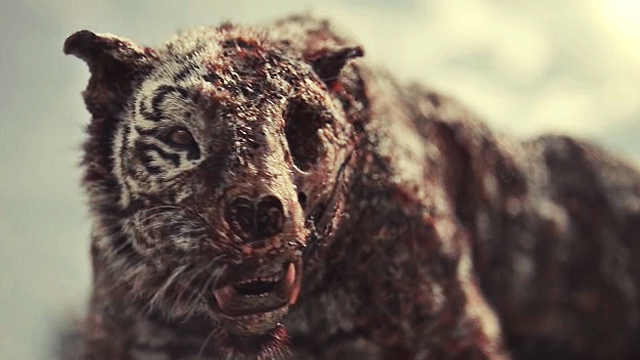 (SPOT.ph) So by now you've probably already watched Zack Snyder's action-packed zombie heist film Army of the Dead over on Netflix (where it occupies the top spot on the trending list as of writing). Whatever you may feel about this crazy two-hour-and-a-half ride, we know you can't deny the movie packed some amazing computer-generated imagery. Case in point: Valentine, the zombie tiger. Wondering how they got the undead big cat so, so right? We lay it down here.

"The idea of a zombie tiger really excited me because it just felt natural to Vegas," Snyder tells SPOT.ph in a roundtable interview. And TBH, we totally agree. As the director points out, "I always felt this notion that there'll be zombie animals." Clearly, he wanted to start this new zombie breed off with a really big bang.

The Unexpected Tiger King Connection of Army of the Dead (AOTD)

Marcus Taormina, AOTD's visual effects chief, shared that Valentine "was a very challenging, very rewarding, and very exciting creature to create," in a BTS video dropped by Netflix. The first step to creating the zombie tiger was, of course, looking for an actual tiger to base it on—and here comes the first fun tidbit.

Taormina and team scoured the U.S. for "big cat rescues" until eventually finding one in Tampa, Florida, that was happy they were "using visual effects as a tool to create a zombie tiger versus actually using a practical tiger." They flew over with some camera gear, and met with the owner and Sapphire, the white tiger that would become the basis for Valentine.

It was only sometime after Taormina flew back home and heard a familiar voice while his wife was watching Netflix that he realized Sapphire's owner was none other than Carol Baskin. As in Big Cat Rescue head and much-debated-upon star of Netflix documentary Tiger King. What are the chances?

The team used the footage they got of Sapphire for "animation, look-development, lighting," explained Taormina. "But then in the end giving it a little bit of character because it's a zombie tiger."

He and Snyder worked closely together to get Valentine's details just right, taking into account the undead cat's six or so years trapped in the desert city. They gave him a sort of emaciated look but kept some chunks of meat to keep him looking every bit as threatening a tiger would. Even the dried blood and matted fur were taken into account.

Getting Valentine Into the Movie

Then once the tiger was built, it was only a matter of actually putting him into Army of the Dead—which, as it turns out, took human beings portraying the tiger's movements. They "shot with a stunt person doing the performance for eyeline and also for interaction with objects," said the VFX supervisor.

As Garret Dillahunt shared, he really was being thrown around for his character's death scene. He's was "suspended in air and whipped around" via harnesses and yup, guys in green suits that would become Valentine. He added that he was "really proud" of that. And judging from how badly viewers probably wanted his terrible character to die—and then got that totally satisfying and well-executed death scene, we think he deserves to be proud of it, for sure.

Unfortunately, they didn't name the superb actors that took on the tiger's role. It's clear they deserve praise, as do the awesome magicians that took the green dudes and turned them into a menacing, very much alive, undead zombie tiger with their computers.

Once the shots were done, it was all about "melding all that together; really coming up with a believable character with the right interaction with everything in its environment [and] with a threat to it," said Taormina. "I really do believe we successfully executed Valentine."

Adventurer Savvy Seasoned Effects Explainer Army Of The Dead Aotd Netflix Staying In Streaming Services
Your Guide to Thriving in This Strange New World
Staying
In? What to watch, what to eat, and where to shop from home
OR
Heading
Out? What you need to know to stay safe when heading out