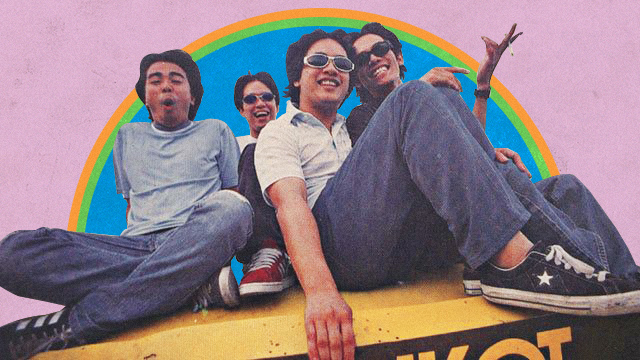 10 Popular Eraserheads Songs and What They Really Mean

Turns out "Magasin" was inspired by Shirley Tesoro.

(SPOT.ph) Ely Buendia, Buddy Zabala, Marcus Adoro, and Raymund Marasigan. These were the people that made up the insanely popular Eraserheads. The band pretty much held sway over the Philippine music scene throughout the '90s and early 2000s—and we know their songs still hold a pretty special place in your nostalgic heart. We take a trip down memory lane and uncover the true meanings and stories—some controversial, others just plain interesting—of some of their best songs, as told by frontman Buendia.

Also read:
The Story Behind the Song "Harana" and Why Parokya ni Edgar Covered It
Ely Buendia Reveals Story Behind Eraserheads' "Spoliarium"

Uncover the origins and meanings of these 10 nostalgic Eraserheads songs:

What it's thought to be about: Pepsi Paloma and the rape-case-turned-urban-myth that Senator Tito Sotto has tried to bury from national consciousness.

The real story: Buendia tried to break the myth decades after the song first made it to the airwaves, saying that “Spoliarium” is really just about “Getting pissed drunk,” on the Wake Up With Jim & Saab podcast. Buendia said that “Spoliarium” is “one of those cases where really the myth has sort of taken over the facts and I kinda like it. I kinda like the myth. Because the actual meaning of the song is also again, just really mundane.” As for that “Enteng and Joey” reference? Well, he stated that those were just the names of a couple of roadies they were touring with.

What it's thought to be about: A fun hodgepodge of old Filipino nursery rhymes with some Nat King Cole references.

The real story: It’s all that and more. Buendia credits a cousin of his—the first person he ever met who played a guitar—and said cousin’s penchant for singing “Toyang” during drinking sessions. According to Buendia, he never did get to ask what the actual song is, all he knows is that “it was a Bicolano folk song,” he told Esquire Philippines. Thank goodness for that one cousin we all have who brings a guitar to every inuman.

What it's thought to be about: A feel-good friendship anthem from the band’s days in the University of the Philippines - Diliman.

The real story: Yes, it is indeed a feel-good friendship anthem about the old days in the University of the Philippines (UP)—but it’s not about the band’s apparently not-exactly-existing friendship. Buendia wrote the song for the friends he made at the Kalayaan dormitory, a.k.a. Kalay, during his freshman year. It isn’t exactly a secret that the Eheads aren’t the best of friends, they’re just a group of people whose dynamics work to make great music—which is something that Buendia confirmed during his Wake Up With Jim & Saab podcast interview.

What it's thought to be about: Illegal drugs and the hit you get after taking them.

The real story: Illegal drugs and the hit you get after taking it. Yup. Remember that huge hullabaloo that landed the band in senate halls defending the song from Senator Tito Sotto in 1995? Back then, the group explained that the song was in no way about drugs, but about freedom. Fast forward a couple of decades and Buendia invoked the “the meaning depends on the reader” card before confirming that “Alapaap” really is an allusion to drugs. “Weed lang naman,” daw.

What it's thought to be about: A hopeful suitor sprouting with sweet promises.

The real story: Turns out most of this song is based on shared, meaningful glances—and not even an actual relationship, budding or otherwise. Buendia said, “One day I was depositing this money I got from somewhere and this girl was just sitting there and I knew I just had to make a song about her,” in a 1993 radio concert on RX 93.1. Talk about young love and fanciful dreaming.

What it's thought to be about: Some guy finds out his first love is now a model for a, erm, magazine for adults.

The real story: The song is based on a cousin of Buendia’s—we’re not sure whether it’s the same one for “Toyang” but if yes, then this is someone we really want to meet—"who apparently dated Shirley Tesoro” presumably before her heyday in the '80s as a bold star. Buendia wrote that song on the way home from work, with Baclaran and all its wares, magazines included, on his route. Throw in some Marvin Gaye influence, and “Magasin” was a banger from the start.

What it's thought to be about: A thought-invoking song about what it means to actually live before dying.

The real story: “I’m so proud of [this song] because it was one of the few songs that I wrote that wasn’t based on anything and it came out from a real desire to express something that I felt at that time—which was, to put it bluntly, father issues,” Buendia told Esquire. When he wrote the song, Buendia was around 15 years old and all the teenage angst, we suppose, was compounded by financial issues as a result of his dad losing his job. Buendia got to see things more from his father’s perspective as he himself grew older and they’ve thankfully patched things up since then.

What it's thought to be about: A message of support for LGBTQ+ peeps.

The real story: While the oppression gay people face was definitely a huge part of the song, it is “not strictly about that,” said Buendia. “I also identified with those people who couldn’t express themselves freely.” There was a time Buendia related strongly to outcasts, even when he was with the Eraserheads, which was a huge driver for the “Hey, Jay” classic.

What it's thought to be about: The mean streets of Manila.

The real story: This wasn’t about just any old street in Metro Manila; this song calls back to the old home where Buendia spent a part of his childhood. He once told the late Ricky Lo that this track is “Another childhood memory song, this time of my days growing up in the streets of Pasig”—which leads us to believe that young Buendia witnessed something truly sinister. Whispers are that it is about a stabbing; one thing’s for sure, this isn’t your usual childhood track that brings you to a safe space in your memories.

What it's thought to be about: Most fans accepted this track as the Ehead’s “valedictory speech,” a sort of “thanks, goodbye” after the reception of their previous, more conceptual album Fruitcake (Read: a huge flop that followed the success of Ultraelectromagneticpop!). Check out the lyrics “Mapapatawad mo ba ako, Kung hindi ko sinunod ang gusto mo / Pinilit kong iahon ka (yeah), Ngunit ayaw mo namang sumama.”

The real story: It was clear the Eheads fans we’re not getting the jive their once-fave band was heading towards; whispers are that this was Buendia’s not so subtle jab at the fact. More than a decade later, Buendia told Manila Bulletin that this is his least favorite Eheads song ever—and rightfully so. “It’s like, ‘Hey, I’m holier than thou,’” Buendia was quoted as saying. “Honestly, I’m embarrassed of that song. It’s pretentious. It’s like me telling the masses, ‘I am your savior, but you don’t want to be saved.’”

Eraserheads Nostalgia Ely Buendia Music Adventurer Savvy Seasoned Staying In Heading Out
Your Guide to Thriving in This Strange New World
Staying
In? What to watch, what to eat, and where to shop from home
OR
Heading
Out? What you need to know to stay safe when heading out