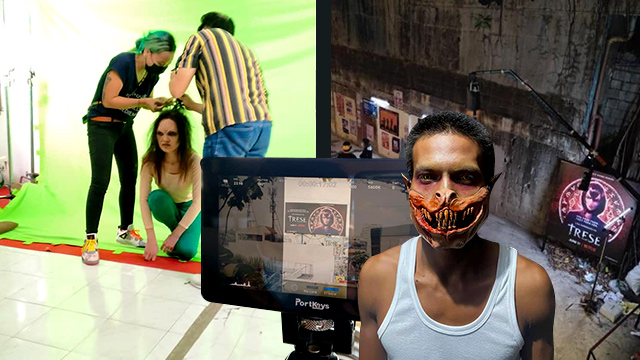 Turns Out GIGIL's Marketing Pitches for Trese Kept Getting Rejected

No black magic involved in those billboards, just a whole lot of gigil.

(SPOT.ph) Nope, it was not monsters that defaced those Trese billboards prior to Alexandra Trese's arrival. Well, not of the folkloric kind, that is. Ad agency GIGIL used its huge store of creativity, tenacity, and, of course, a whole lot of gigil to pave the way for the hit adaptation's drop on Netflix. We can't even remember the last time advertising for a show had people talking this much, so we had to talk it over with GIGIL themselves to find out how it all went down.

Putting the Aswang at the Center of Marketing Trese

"Netflix wanted something, let's say, kailangan nila ng maangas," for Trese, says senior art director JR Bumanglag in a call with Summit Media. The ad agency had worked with Netflix many times before on other projects (Remember that hilarious "Ninong" Christmas ad and the To All the Boys cupids?) so the team knew they had to deliver something completely different for Trese.

Add in the fact that this was a hugely important show to Pinoys in general—not to mention some diehard fans of the OG graphic novels were also in the GIGIL team—and it was clear that Trese was their chance to crank things up a notch or 10.

"'How do we bring to life a 2D animation [and] bring it to the real world?' That was the challenge that Netflix gave us," continues Bumanglag. The team then realized that while everyone was excited for the badass Lakan's arrival, "Trese's enemies in the show were not. So how do we give them that voice, how do we show that the monsters are real?"

That was the idea at the core of Trese's marketing: to bring the magic realism of the source material and the adaptation to the real world. And what better way to do that than through billboards?

Making the Trese Billboards and More

We know you saw the "vandalized" Trese billboards pop up on the weekend of June 5, just a few days before the series was released on June 11. And the "leaked" clips of the "aswang", "tiyanak", and "mananggal" attacking the billboards that came soon after—courtesy of director Victor Kaiba Villanueva and team. Yup, those were actual human beings under those costumes and epic CGI.

A lot went into making the billboards and those super short clips, from making them to planting the culprits' reveal online. "I think we put up around 20 billboards nationwide," shares Jim Jimenez, group accounts director. And yup, that meant all those billboards had to be put down and replaced with the "defaced" ones at the same time. "The inital plan was for people to rapel down the billboard and go slicing," adds Jimenez with a laugh, but that idea was quickly shut down for safety reasons and, of course, to avoid being seen.

They had to switch out the clean billboards with the "vandalized" ones all at the same time, across the nation, otherwise "it wouldn't be as impactful," says Nova Novido, the account manager. "It was quite a logistical challenge for us, but we had really great partners." Plus, the team credits a storm for keeping people, and their smartphones, inside when they were slated to do the switch.

But having Netflix as their client meant they had so much they could do—so they really went all out. Aside from the billboards and social media, there was also the UDD salubong stream, murals that acted like real-life "easter eggs," says Jimenez, all over Metro Manila, and yup, even the ABC-ZNN stint at the ABS-CBN headquarters in Quezon City.

While everyone online was in awe of Trese's large-scale marketing, the GIGIL team involved does confirm that it was a lot of hard work behind the scenes, all the way from conceptualizing to execution. "The tone wasn't really there for the first round [of pitching]," explains Bumanglag—which meant that Netflix scrapped pretty much everything the first time around. "I think ito na 'yong [campaign] na pinaka-madaming rejection, in terms of initial pitches," shares Jeano Cruz, GIGIL creative director and head of socials. The first stuff they thought of included an aswang mukbang—TBH, we'd like to see that—but thankfully, they decided to go beyond just videos.

Needless to say, GIGIL came back strong once they found the right tone, then  promptly had to battle a new set of monsters. "When we were executing the ideas already, parang may literal na mga aswang na really bugging us and hindering us from executing the campaign," shares Jimenez. Aside from the storm—which ironically worked out in their favor—there were also "challenges with the billboards, brownouts during shoots," and of course, "executing this in the middle of the pandemic."

In the end, Jimenez credited more than just the GIGIL team for how great the Trese marketing turned out. There was the Netflix team—who were so game for bigger and bigger ideas that Jimenez had to constantly consult lawyers if they were still within bounds, all the folks who executed their huge ideas, and yup, the support of the OG fans of the Trese novels and that of Liza Soberano.