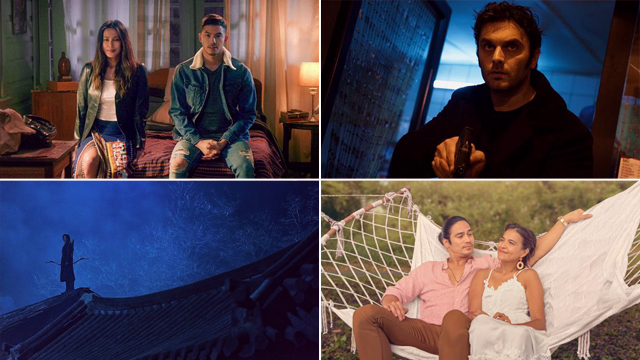 Glorious, My Amanda, Kingdom: Ashin of the North, and more!

(SPOT.ph) Can you hear the Christmas bells ringing? The "-Ber months" are just a few months away now, and we all know how fast the time goes. Don't forget to take some time off to stream these must-watch titles heading to Netflix next month. For July, we've got loads of Pinoy content, good old K-Dramas, and more.

Put these 10 exciting titles on your Netflix Philippines watch list this July 2021:

South Korea is gifting us with another gory action flick! When a mysterious power is unleashed on the Earth—and promptly begins to murder—one monk has just a few days to stop it before all hell breaks loose.

How I Became a Superhero

In a world where superpowers are the norm, one less-than-motivated cop finally finds a push in the form of a new partner—and a race to uncover a sinister drug ring that extracts people's powers.

Twitter queen Alessandra de Rossi continues to prove that she can do anything. Just take her directorial debut, My Amanda, for example! We can't wait to see what heart-wrenching levels this story about two lifelong best friends, played by De Rossi and Piolo Pascual, will take us.

Never Have I Ever (Season 2)

A high-school series directed by Mindy Kaling? Oh, you know this series would definitely need a second season. Devi (Maitreyi Ramakrishnan) now has the exact opposite of her previous problem: she's gone from zero boyfriends to two.

No one does creepy thrillers the way Thailand does. In this film, four insomniac medical students are lured to be lab rats for a neuroscience experiment. Things go great—at first. Soon, the four must find a way out before it's too late.

This movie about a May-December relationship made a huge splash when it dropped in theaters in 2018. It stars Angel Aquino as Glory, a 52-year-old who falls in love with a much younger Niko (Tony Labrusca). Cue the ups-and-downs of a not-so-typical couple, and a whole lot of steamy scenes.

Why does anime know exactly how to do dreamlike romances between two kids? In this brightly colored flick, a bubbly girl crosses paths with a shy boy who expresses himself mainly through haikus.

Kingdom: Ashin of the North

Raise your hands if you also feel like you've been waiting for a continuation of zombie series Kingdom since forver! No matter, at least we're getting this special sidequel episode. In this one, we go back in time to see exactly how the ressurection plant triggered the plague—and what Ashin (Gianna Jun) has to do with it.

The Last Letter from Your Lover

Based on a novel by Jojo Moyes, this romance covers two love stories. That of the journalist, and that of the two paramours whose letters she one day finds. Best ready your tissues—and hearts—for this one!

You're never too old to watch a fun cartoon—especially when it's as star-studded as this one. In this one, a war hose finds herself in a fun, crazy world where they sing and dance as she tries to make her way back home. Fun fact: Lea Salonga joins the cast of alongside more Broadway stars.

Adventurer Savvy Seasoned Netflix Streaming Services Staying In Guide
Your Guide to Thriving in This Strange New World
Staying
In? What to watch, what to eat, and where to shop from home
OR
Heading
Out? What you need to know to stay safe when heading out