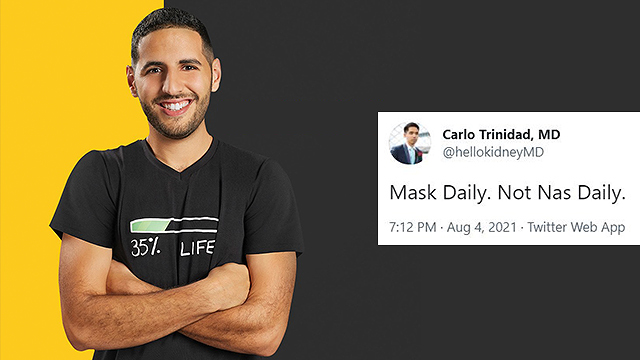 Nas Daily, Pinoybaiting + Our Need for Validation: A Short History

Think before you click on your next Pinoy food chain taste-test video.

(SPOT.ph) Nas Academy has answered claims that the Whang Od online course isn't real. They posted a video of the contract-signing with the famed mambabatok to Facebook on August 5, after the mambabatok's kin sounded an alarm on social media as well the day before. That same day, the Whang Od course disappeared from the Nas Academy site, a move they said was "out of respect for her family." They have taken down the course "while we resolve any issues that have arisen from these falsehoods," they said.

According to the Nas Academy page, Whang Od was accompanied by her niece Estella Palangdao during the contract-signing. "Everybody was compensated for their time, and for every sale the Whang-Od Academy generates, most of it went directly to her and her family," they wrote.

You probably remember the waves made by Nas Daily, as led by Nuseir Yassin, when they first announced that 12 popular Filipino figures would be teaching online courses through Nas Academy. Former Miss Universe titleholder Catriona Gray launched her classes first on July 31.

Gray posted a thank you on August 2 for the folks who attended the launch of her classes. With 600 people in the virtual party, it was clear people were excited—as we were when we first heard about Gray's course at Nas Academy in early July. The "coming soon" lineup they currently have includes veteran journalist Jessica Soho and famous designer Michael Cinco—whose classes are marked coming soon, as of writing.

So far, only Gray and Marvel Studios artist Anthony Francisco have their courses up on Nas Academy, though Soho promoted her course on Kapuso Mo, Jessica Soho on July 18, while Heussaff has collaborated with Nas Daily on videos before.

Needless to say, claims of the Whang Od Academy being fake set Twitter on fire. People are arguing that the course seemed exploitative from the start, especially since this is a revered tradition that was being marketed as a supposed class. One Twitter user said Nas Daily was "outright exploiting an indigenous people's tattoo culture." Another Twitter user even used the buzz to slide in an important health reminder.

Others are also saying this is proof that Nas Daily is guilty of one of the biggest problems of vlogging today: Pinoybaiting. We're sure you've heard the term before. Nas Daily's presence in the Philippines has always been strong—enough for the channel to have a verified Nas Daily Tagalog Facebook page. The one-minute videos typically concentrate on the good side of the country.

Pinoybaiting is when someone, typically a vlogger, puts out content made to make Filipinos feel good about themselves—with the real goal being to get large viewing numbers from the country that's been named the world's social-media capital, not to actually share or promote our culture. These types of videos are usually formulaic, reaction-based ones. Think anything Jollibee or food-related, really. You know that strange feeling you've had while watching a foreign vlogger bite into ChickenJoy as if it were a blessing straight from the heavens? That moment when you stop for a bit and say, wait a minute, am I being duped?

As Pinoy content creator M.A. Buendía HD pointed out on Twitter in January 2020, Pinoybaiting is pretty much a "marketing strategy" geared towards getting the most out of Filipino viewers. It can't be denied that the typical reaction to seeing any foreigner gushing about anything somewhat Filipino-related is heaps of views, comments, and engagement. Why? "Our thirst for global validation is real," argues Buendia.

You could probably blame it on our long history of colonization and our resulting current status as a developing nation. After all, would you rather have "Jollibee" or "Duterte" come to a foreigner's mind first when asked about the Philippines? These types of videos, no matter how shallowly they touch on our culture, feed into our need to be seen as equals by others. But can that validation be real if the video it came from isn't 100% honest?

"Forty percent of Nas Academy is made up of Filipinos. So for us, this is personal," clarified their statement. The Whang Od Academy has definitely ignited discussion not just on the famed mambabatok, but has also highlighted Nas Daily as a whole. The courses are a different path from the one-minute, feel-good videos the channel became famous for—now whether this will save the Nas Daily tag from being synonymous with Pinoybaiting is yet to be seen. We say just think before, during, and after, you click.

Adventurer Savvy Seasoned Nas Daily Pinoybaiting Explainer Staying In Heading Out
Your Guide to Thriving in This Strange New World
Staying
In? What to watch, what to eat, and where to shop from home
OR
Heading
Out? What you need to know to stay safe when heading out