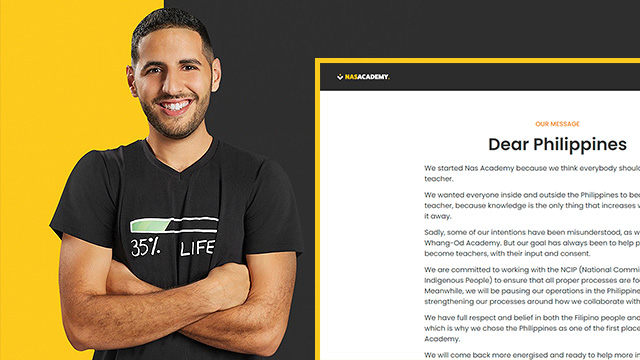 Nas Academy Announces Pause in Operations in the Philippines

Nas Academy said Sunday it is pausing operations in the Philippines as it sought to resolve the controversy involving Apo Whang-Od, the centennarian keeper of Kalinga tattoo art who was supposed to teach in the online learning platform.

The management of Miss Universe 2018 Catriona Gray, who is teaching a class on how to be a queen, said her eponymous academy would stop accepting new applicants until the issue involving Whang-Od is resolved.

Also read:
Nas Daily, Pinoybaiting + Our Need for Validation: A Short History
More Than an Unfollow, the Nas Daily-Whang Od Issue Is About Protecting Our Culture

In a statement posted on Facebook and on their official website, Nas Academy said that while its goal was to help people become teachers, some of their intentions "have been misunderstood."

"We are committed to working with the National Commission on Indigenous People to ensure that all proper processes are followed," it said.

"Meanwhile, we will be pausing our operations in the Philippines to focus on strengthening our processes around how we collaborate with our partners," it added.

Nas Academy maintained that it has full respect and belief in the Filipino people and culture.

"We will come back more energized and ready to help more inspiring people become teachers in the Philippines," it added.

Last week, Apo Whang-Od's grandniece, Gracia Palicas, claimed that the mambabatok's advertised masterclass on the platform was "not real."

Palicas said Apo Whang-Od supposedly did not understand her contract with vlogger Nas Daily. She said her 104-year-old grandmother could not understand what the translators were saying when they came to Buscalan for a feature.

Nas Academy defended itself from accusations that it was exploiting Apo Whang-Od, saying it did not scam her. It even showed a video of the tattoo artist signing a contract being assisted by a niece.

Hard News Whang Od Nas Daily Staying In Adventurer Savvy Nas Academy
Your Guide to Thriving in This Strange New World
Staying
In? What to watch, what to eat, and where to shop from home
OR
Heading
Out? What you need to know to stay safe when heading out