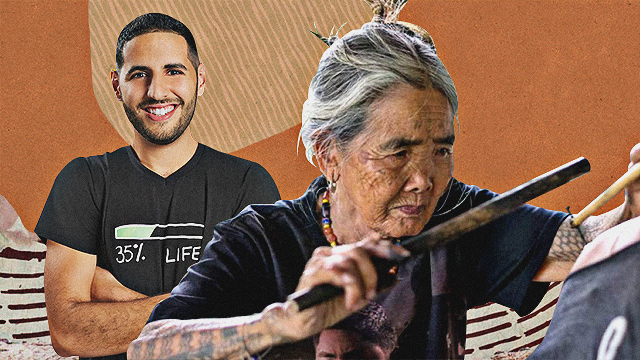 More Than an Unfollow, the Nas Daily-Whang Od Issue Is About Protecting Our Culture

One anthropologist points out where Nas Daily went wrong.

(SPOT.ph) Nas Academy is on "pause" in the Philippines, they announced on Sunday, August 8. "We will be pausing our operations in the Philippines to focus on strengthening our processes around how we collaborate with our partners," they wrote on Facebook. On the same day, former Miss Universe Catriona Gray's camp also announced that they have stopped accepting new applicants to her online class. Nas Academy stated that they are "commited to working with the National Commission on Indigenous People to ensure that all proper processes are followed" in regards to the now controversial online course they promoted to be taught by Whang Od, the famed mambabatok of Kalinga.

The Whang Od course was removed from the Nas Academy—an offshoot of the popular Nas Daily video channel—the site after a relative of the Whang Od said on August 4 that the mambabatok had no knowledge of the course.

This turn of events ignited one heck of a shitstorm online, with the past few days full of people calling others out and "Nas Daily" consistently on the Twitter trends list. But beyond all the accusations of Pinoybaiting and unfollowing, there have also been discussions on whether it was right to even think up an online class to "Learn the Ancient Art of Tattooing," as the site called it, in the first place. As Whang Od's grandniece Gracia Palicas said, "Some people are taking advantage of our culture."

When the course was being promoted online, the site stated that the mambabatok would "reveal all her rituals, tools, and methods for making traditional tattoos." Topics would cover Whang Od's journey and "the cultural aspect of her medium, from rituals, meaning of symbols, and preservation," among others. The price tag for all this knowledge? P750.

The main content of the course alone should have been a red flag. "Nas Daily does not understand Kalinga culture,"said Doctor Nestor Castro, an anthropologist and professor at the University of the Philippines Diliman on his Facebook page on August 6. Whang Od's skill and artisty was "derived from the indigenous knowledge of generations of Kalinga ancestors. Thus, this indigenous knowledge is collectively owned (although it may be individually practiced) by the Butbut." Whang Od is a member of the Butbut, one of the peoples of Kalinga.

Though Whang Od may be the last known mambabatok, the tradition is not hers alone. A contract with just Apo Whang Od will not be enough, explained Castro. "The consent of the members of the Butbut is necessary if this knowledge is to be shared to outsiders."

Consent from the members of the Butbut for something like the Whang Od Academy is actually mandated by law, said the anthropologist. "Free and prior informed consent is required when the knowledge of indigenous peoples is used for commercial purposes," said Castro, pointing to Republic Act No. 8371 or the Indigenous Peoples Rights Act. "This is especially true of the Whang-od Academy [which] will reveal to outsiders about the indigenous community's rituals."

Castro added that "The agreement between the parties should also be written in English and the local Kinalingga language and witnessed by the National Commission for Indigenous Peoples."

The commission has also taken note of the issue. Marlon Bosantog, a lawyer from the National Commission on Indigenous Peoples (NCIP) Cordillera Administrative Region stated online on August 5 that the commission will be looking into whether the proper process was followed for the online academy. "There are issues of cultural intellectual property that intersect in the art of Apo Whang Od."

"Bandying on social media a contract is not a proof of compliance," added Bosantog. Nas Academy had earlier posted a video of Whang Od affixing her thumbprint to what looked like a contract in answer to the buzz online.

This isn't the first time someone took a little bit of someone else's culture and turned it into something meant to make profit. Three white women went under fire when they sold whitewashed Mahjong sets for U.S. $425 (roughly P21,500) in the U.S. in January. Remember when Kim Kardashian tried to turn the word "kimono" into a trademarked brand name? And don't even get us started on cultural appropriation in food.

Granted, it can be a little hard to draw a uniform line between celebrating culture and commodifying it. But when it is something as big as an online course easily accessible online, then the answer is pretty clear. There is always a way to share and teach our culture to others in a genuine manner. But as of now, there's no telling how much knowledge is on the line here, nor can we say whether the course will still happen. What is clear is that this is not something we can just leave be and regret in retrospect.

UPDATED (August 8, 2021): This article was updated after Nas Academy announced that they are pausing operations in the Philippines.

Adventurer Savvy Seasoned Whang Od Nas Daily Explainer Staying In
Your Guide to Thriving in This Strange New World
Staying
In? What to watch, what to eat, and where to shop from home
OR
Heading
Out? What you need to know to stay safe when heading out