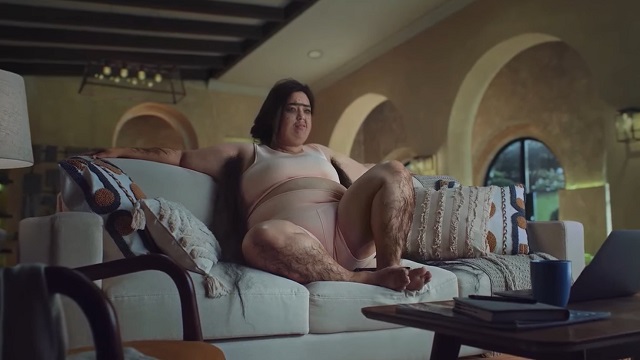 They apologized for the controversial commercial.

(SPOT.ph) Belo Medical Group has taken down the controversial "Pandemic Effect" ad after criticism from folks online. They issued an apology on Wednesday, August 11. "Thank you for being gracious in letting us know your thoughts about it," they wrote in the message uploaded to social media.

Also read: The Origin Story of GIGIL, The Ad Agency That's Got Everyone Talking

The commercial in question featured a woman whose appearance changed while watching news on the television. It starts off with her settling down on a couch and turning on the TV. The camera then zooms into her face as headlines sound off in the background—while her expression shows her getting stressed out, her face starts to grow pimples and hair.

Her body starts changing too, and by the end of it, she has gained weight and grown lots of body hair. She turns off the TV to answer a video call and after asking how she is, the voice on the other end pointedly asks "Anyare?" The commercial ends with the tagline, "Tough times call for beautiful measures."

Also read: Why Are We Still Doing Body-Shaming Ads in 2021?

Coming from creative ad agency GIGIL, the commercial was indeed as shocking as their other buzzy ads—but it clearly struck a different chord with viewers. People online called out the insensitivity of the commercial, saying it didn't account for health issues, both mental and physical, that were also portrayed. Plus, it seemed to undermine a whole slew of other effects the pandemic had.

The ad is a part of their #PandemicEffect campaign, which also had celebrities and influencers use the hashtag in social media posts about their own pandemic experience—and how the medical group helped them out.

"Thank you for being gracious in letting us know your thoughts about it," said the medical group in their statement. "We commit ourselves to learning from this and to bring our learnings into the future."

Ad agency GIGIL issued their own statement of apology late night on August 11. They acknowledged their insensitivity, stating that Belo had posted "a film that we created which caused distress to a considerable number of people." They added, "We will learn from this, and we will do better."

UPDATED (August 12, 2021): This article was updated after GIGIL issued their statement.

Adventurer Savvy Seasoned Belo Gigil Commercials Staying In
Your Guide to Thriving in This Strange New World
Staying
In? What to watch, what to eat, and where to shop from home
OR
Heading
Out? What you need to know to stay safe when heading out