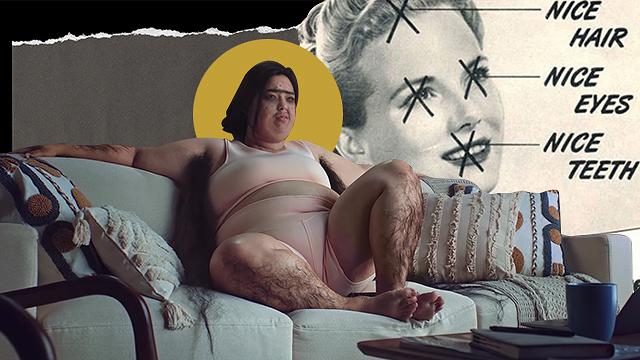 Why Are We Still Doing Body-Shaming Ads in 2021?

(SPOT.ph) It's the middle of the pandemic and what are possibly the worst headlines in recent human history are being reported on national television: extended lockdown, travel suspension, economic recession, not to mention extreme weather disasters and so on. On the couch, a woman watching the news is getting stressed out. Belo Medical Group, through ad agency GIGIL, just made a commercial about what is a pretty relatable situation for most people, but things took a wrong turn: The mostly commonplace scene goes into timelapse mode as the woman's face starts to grow pimples and hair. While the world is (literally) burning, the ad ends with its call-to-action: "Tough times call for beautiful measures."

Also read: The Origin Story of GIGIL, The Ad Agency That's Got Everyone Talking

The advertisement has since been taken down after drawing flak online, with commenters citing its insensitivity and the commodification of women's insecurities. But let's face it, the Belo ad isn't the first to perpetuate the idea that around here, there's a certain standard of beauty that's not always realistic or healthy. Some skin whitening products still advocate for fairer skin, weight-loss supplements promote the bikini-body as the sole goal, and cosmetics are marketed as the key to getting a man's attention. Times have changed drastically, but sexist and body-shaming ads persist in 2021. Sometimes, they're even classified as "aspirational" advertisements just to be politically correct about it.

Are We Back in the 1930s? Body-Shaming Through the Years

In an interview with Mental Floss, vintage ad collector and Southern California artist Cynthia Petrovic shared some of the most offensive print ads seen in magazine spreads. "The mass media that breeds insecurity in our culture started in the late 1800s with the spread of magazines," she said; but the advertisements of the 1930s, according to her, had the most opinions on how women should look, smell, and dress up—unless they want to be left by their husbands or never be invited to a dance by a man. Most products back then, Petrovic explained, cultivated women's paranoia, fear, and inadequacy. "It’s also a part of the ad’s job to create and continually foster an environment where you’re perpetually terrified into purchasing things that don’t work," she added.

A disinfectant, which was sold as a feminine hygiene product in the '30s, produced print ads that show a man leaving his wife. Shampoo companies were incessant in reminding women that their hair collects "unpleasant odors" with illustrations of men smelling their hair. Advertisements on "bust reducer," "chin reducer," and "abdominal reducer" contained the warning in big, bold letters: "Don't stay too fat!"

These print ads pushed the idea that women have to worry about how men perceive their bodies; and, almost a century later, a video ad wants a woman on a couch to worry about her pimples and facial hair while people are dying. Yes, we have to take care of ourselves (physically, mentally, and emotionally) especially in these "tough times," but maybe don't use women's insecurities (a.k.a. paranoia, fear, and inadequacy) to push it. (See above.)

Still, there's been a lot of progress in leaving the antiquated mindset of the 1930s behind. Social media platform TikTok, for example, announced in September 2020 that they're restricting ads that "do not support the positive, inclusive, and safe experience [they] strive for." Advertisements for weight-loss supplements and mobile apps for dieting won't be shown to users who are under 18 years old. They also partnered with the National Eating Disorder Association to provide body-positive content.

"As a society, weight stigma and body-shaming pose both individual and cultural challenges, and we know that the Internet, if left unchecked, has the risk of exacerbating such issues," TikTok’s stateside Safety Policy Manager Tara Wadhwa said in a statement.

Britain’s Advertising Standards Authority in December 2018 announced a ban on advertisements that use gender stereotypes to sell products, effective June 2019. This came after they published a 64-page report detailing how gender stereotypes in ads "can lead to unequal gender outcomes in public and private aspects of people’s lives." The report cited ads such as a weight-loss drink that used the tagline "Are you beach body ready?", and a baby-formula commercial that showed a girl growing up to be a ballerina and a boy growing up to be a mathematician. The new rule says that "advertisements must not include gender stereotypes that are likely to cause harm, or serious or widespread offense."

Whether we like it or not, mass media—including advertising—has always played a role in how people see themselves. The print ads of the 1930s pressured wives to look good for their husbands, glossy magazines of the '80s and '90s showed teen girls the "ideal" body image, and social media is greatly affecting how people project themselves to others. And now is probably not the time to be shamed about the way we look. Especially not when there are people around the world just barely surviving.

Belo Medical Group Explainer Adventurer Savvy Seasoned Gigil Staying In
Your Guide to Thriving in This Strange New World
Staying
In? What to watch, what to eat, and where to shop from home
OR
Heading
Out? What you need to know to stay safe when heading out